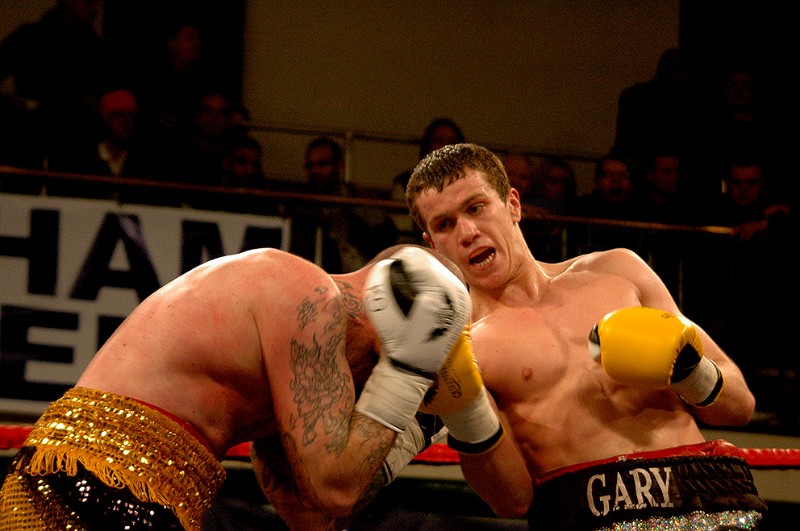 Sensational Welterweight prospect Gary Corcoran is back in action this coming weekend, when he takes on Welsh battler Dai Jones, on the Queensberry Promotions ‘Rock The Box II’ mega event at the Copper Box Arena at the Queen Elizabeth Olympic Park in Stratford on Saturday 30th November 2013.

With six excellent wins under his belt already, the Paddington, London based twenty three year old is without doubt one of brightest future stars to come out of the TRAD TKO Gym in Canning Town in recent times.

Right from day one, Corcoran has entertained the fans, and terrorised his opponents, with his marauding all action style, just ask any of his opponents, especially Matt Seawright and Ross Payne, who both got stopped well within the distance, Payne in just 2 minutes of the first round back in November last year.

Taking a break from his final preparations Corcoran took a few moments to talk about his upcoming showdown with Dai Jones, as well as hints at Championship aspirations in 2014.

I don’t know anything about him, I let my trainer look at him, I’ll just get on with it, I’ve had six good wins, hopefully this’ll be my seventh win.

This will be my last six rounder, so will be stepping up after this and hopefully I’ll get a Southern Area title under my belt in 2014 and go on from there.

My camp has been great, no problems at all, I just can’t wait to get in there and do the business.

It’s going to be a great show, unfortunately Nathan Cleverly has had to pull out, but the rest of the show is so strong the fans are going to be more than happy.

I’m not the only fighter from the TRAD TKO on the card, Frankie Buglioni and Colin Lynes are both fighting for titles and I’m on there, so there’ll be plenty for the boys to cheer for on the night.

I want to say a big thank you to all those that will be turning out to support me, you’re going to see even better from me on the 30th, even better than before – Gary Corcoran is out for more.”

Remaining tickets for ‘Rock The Box II’ are available at www.tkoboxoffice.com