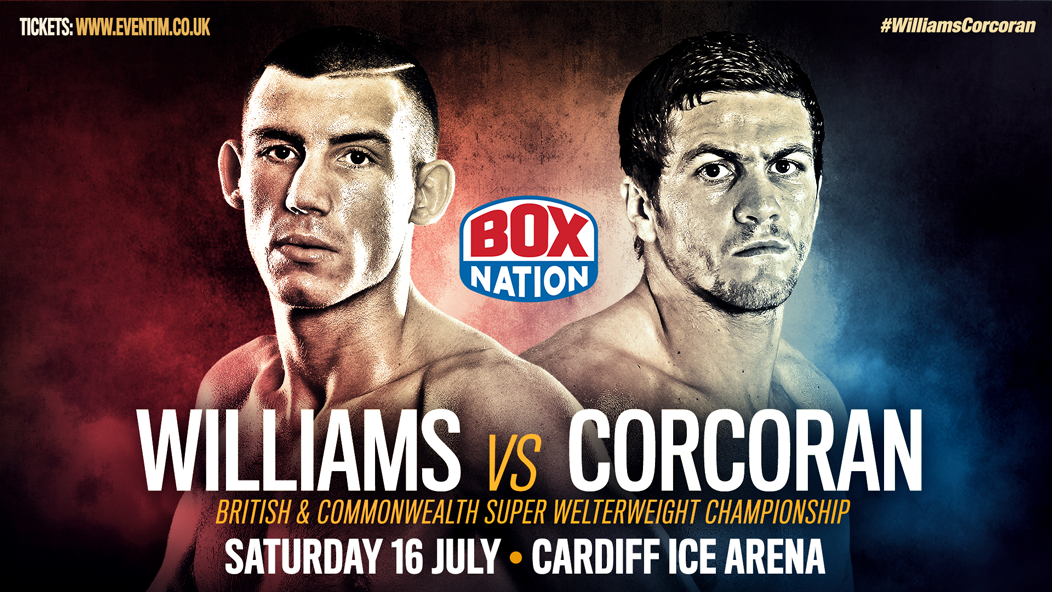 Big time boxing returns to Cardiff this summer as two of the UK’s unbeaten champions put it all on the line in what should be a fight of the year contender. British and Commonwealth Super-Welterweight Champion Liam Williams defends his titles against WBO Intercontinental Champion Gary Corcoran. The bitter rivals will lock horns in a grudge match showdown at the Cardiff Ice Arena on Saturday 16th July, live and exclusive on BoxNation.

Big-punching Williams was in devastating form in 2014 with stoppage wins over Yuri Pompilio, Ronnie Heffron, Stepan Horvath and Michael Lomax. The unbeaten Welshman was side-lined for the majority of 2015 with hand injuries but now he’s back punching harder than ever.

Williams is raring to get back on his world title trail after blasting out Gustavo Alberto Sanchez inside three rounds on his 2016 ring return on the undercard of Liam Smith’s world title defence against Predrag Radosevic, which followed a career best performance against Kris Carslaw in December. There is no love lost between the super-welter rivals and Williams is itching to get it on in the ring.

Williams said: “To be honest with you I don’t like the man at all. He’s given me a bit of lip on Twitter a few times and I’m looking forward to putting some hurt on him. I’ll have the home crowd behind me and I’m going to send him home with his tale between his legs.

“Gary thinks a lot of himself and I’m not sure why. He’s a confident man but I’m not sure where he gets that confidence from. On his day he can be dangerous but I’m going to batter him, he won’t be able to handle my power.”

Known as the ‘Hell Raiser’ for his ferocious fighting style, Corcoran has ripped through his first 15 opponents; claiming 6 knockouts along the way. The unbeaten 25 year-old wants to take out as many rivals as possible on his journey to a world title; starting with Williams.

“Williams is the fight I’ve wanted for a long time; I know I’ve got the beating of him. I’ve got the ability to box him or fight him so I’ll be prepared for whatever he brings to the table on the 16th.”

“I know I’m a better fighter than him and I’m going to prove it. He doesn’t have as good an engine as me and it will show on the night. I want to be British champion this year and really push on from there; Liam is standing in the way.”

Big news about the rest of the card will follow this week which will see a huge fight involving a pound-for-pound superstar also added to the bill. More to follow!

BoxNation, the Channel of Champions, will televise the show live and exclusive on Sky 437/HD 490, Virgin 546, TalkTalk 415, Freeview 255 and also on smart connected devices via multiple platforms. Go to www.boxnation.com to see how you can watch this fight and more live!