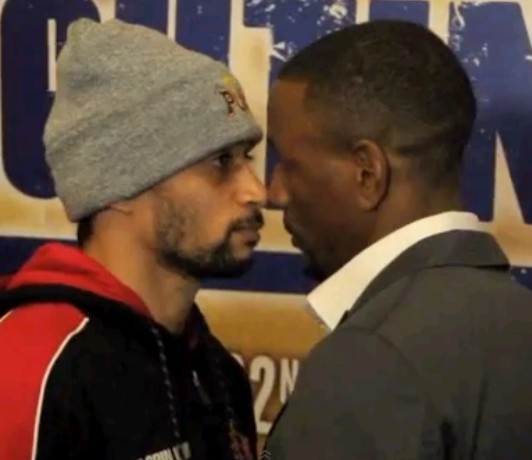 Darren Hamilton defends his British  light-welterweight title against Curtis Woodhouse on Saturday night at the Ice Arena in Hull. Today they came face to face for the last time before they meet in the ring, when they both attended the final press conference for the Matchroom show.

The boxers were encouraged to face off and each kept their stare and wouldn’t look away, even after being encouraged too by their respected teams. Then the verbal’s began and has things started to get over heated and with the fear of things boiling over before they fight for real this weekend, they were pulled apart!

The exchange of words continued from afar and the love between these two close to fight night is lost. Watch the full video above by iFLTV.

Hamilton, 35, from Bristol, can claim the Lonsdale belt for keeps should he overcome Yorkshire’s Woodhouse the ex-professional footballer and English boxing champion, who will be fighting for the final time before retiring from his second career.

Hamilton vs Woodhouse is part of boxing in Hull, with Olympic Gold medal hero Luke Campbell MBE stepping up to eight rounds for the first time in the paid ranks against Scott Moises.