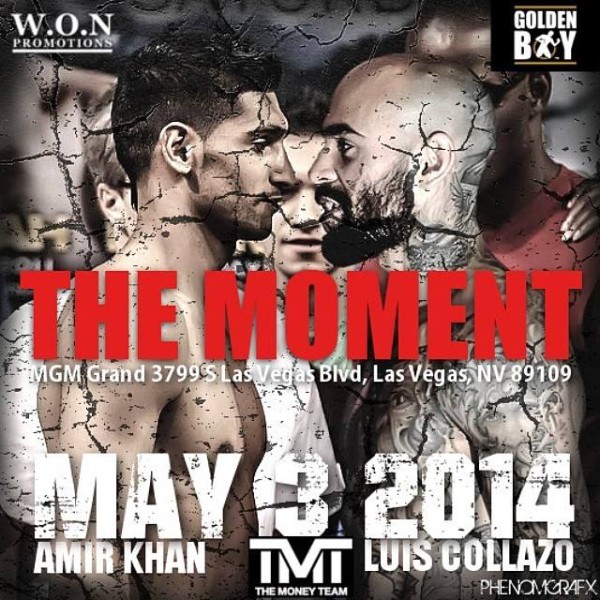 Khan ready for Collazo test on Mayweather bill this Saturday

British boxing star Amir Khan has vowed to look his best yet despite spending the past year out the ring.

The former unified light-welterweight world champion has endured a frustrating 12 months having seen his chances of fighting Floyd Mayweather disintegrate when the pound-for-pound ace opted to fight Argentine bruiser Marcos Maidana instead.

Despite the setbacks, which saw Khan pass up the opportunity to take on Devon Alexander last December for the IBF welterweight title following assurances he would land ‘Money’ Mayweather, the Bolton pugilist is upbeat about his upcoming fight with the tricky southpaw Luis Collazo.

“It was a difficult time,” said Khan. “But the fact is I moved on fairly quick when I knew the Mayweather shot wasn’t happening. It was just about refocusing my mind on the next opponent and luckily we were able to announce Luis Collazo straight away which allowed me the chance to get back in the ring as soon as possible.

“I wanted a tough challenge at welterweight and not just to go in there against some average guy. Collazo is a legitimate welterweight who is very confident after his win against Victor Ortiz but I know I have the tools to beat him,” said Khan.

The Olympic silver medalist goes into the fight having not been in the ring since he overcame Julio Diaz in Sheffield last April.

Yet, Khan is confident he will be much improved having spent the last year locked away in the San Francisco gym of his esteemed American trainer Virgil Hunter.

“Over the last 12 months I’ve been in camps with Virgil and we’ve been working on certain aspects of my game that I never really got the chance to work on because I just didn’t get the time as I was fighting so often.

“Through the last few months I’ve been focusing on improving myself and adding certain things to my game. Because I didn’t have an opponent lined up and I wasn’t fighting I had the time to look at myself and work on things I wanted to work on.

“On May 3rd I’m going to put that all into practice on the biggest stage and not only beat Collazo but look to beat him in real style,” said Khan.

The 27-year-old is also refusing to look past the Brooklyn banger as talk of a showdown with Mayweather later this year, should he prevail, constantly being mooted.

“I’m not thinking about other possible fights, my mind and my attention is solely on Luis Collazo. To overlook him would be foolish, he needs to be respected and I give him that respect,” said Khan.

“I don’t know what the future holds for me, all I know is I have to get through Luis Collazo to see what that might be. It’s a tough fight but one I’m ready for and very confident about.

“I can’t wait to get in the ring on Saturday because it’s been so long – I wish it was tomorrow,” Khan said.

The 33-year-old Collazo is also well aware of how big a fight this could be in his career.

The Puerto Rican-American has shared the ring with a number of top fighters, including a closely contested bout with fan favourite Ricky Hatton back in 2006.

Now, however, he is at a crossroads in his career, with a win over Khan propelling him into a shot at even bigger fights.

“This fight [against Khan] is my whole career right in front of me,” said Collazo. “I believe if I beat Amir Khan I have a bigger future in boxing and if I don’t, I have to start from the bottom again. I am not looking beyond Amir Khan. He is my main focus. From here whatever happens happens, but Amir Khan is all I’m thinking about right now.

“A win over Khan does put me in the Mayweather sweepstakes, but my sights are set on Khan,” he said.

Khan and Collazo’s bout will act as the chief support on a packed bill at the MGM Grand this Saturday, which also sees the brash talking Adrien Broner back in action against Carlos Molina, before the headliner Mayweather looks to make it 46-0 against the rugged Maidana.

BoxNation viewers will be able to see a special hour long countdown show previewing the respective Mayweather and Khan fights this Friday at 7pm, with the final ‘All Access: Mayweather v Maidana’ show premiering on Saturday at 7pm.

Mayweather vs. Maidana/Khan vs. Collazo is live on BoxNation (Sky 437/490HD & Virgin 546) this Saturday midnight. Visit www.boxnation.com to subscribe.