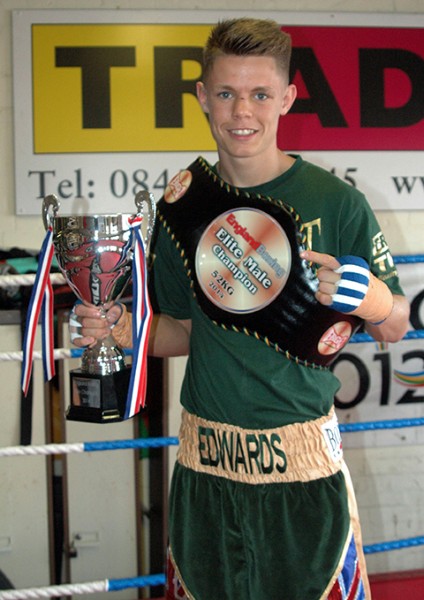 Charlie’s clever work on the counter attack was key to him securing the unanimous points victory over his chief rival for the Flyweight slot in England’s Commonwealth Games team.

Whilst the selectors have yet to announce the 2014 Commonwealth Games squad, it is without doubt that it is now Charlie who is firmly in pole position for the 52kg berth for the Games, which take place in Glasgow in July.

As such within days of his victory, 21 year old Charlie was back in training with coach Brian O’Shaughnessy, at the TRAD TKO gym in Canning Town, to begin preparations for his anticipated participation at the Commonwealth Games.

Following a sparring session with his equally talented younger Brother, 2014 Youth ABAs Champion Sunny Edwards – who is also coached by Brian O’Shaughnessy at the TRAD TKO, Charlie spoke briefly about the Championship and his future aspirations.

I boxed really well, I put in a really good performance and showed everyone that I am number one in Britain.

The first fight I got drawn against an Army boy, I say boy but he was a twenty nine year old man.

He’d come down from 57kg, he’d dropped a bit of weight to get to my weight, so he was a bigger, stronger man.

Thirty seconds into the fight, he just chucked a nut into me, he head butted me straight onto my nose, broke my nose, I’ve never felt a pain like it.

As soon as he hit it I was dazed, I went to the corner and they let me fight on, I was fighting on autopilot, I didn’t know where I was and the next minute I’m out of the ring and asking my dad who I was fighting in there.

I did get through it, I won unanimously, but the head butt just knocked me off my game plan and I was on autopilot, but I still won.

The next day I fought Blane Hyland from Liverpool, he’s a very tricky sit back Southpaw.

I took centre of the ring, I really controlled the fight and kept it at my pace and kept hitting him with clean shots, straight right hands through the middle, which were shooting his head back, which all the judges see and I won that fight comfortably as well.

I then boxed Jack Bateson, the Team GB second seed, in the final.

Everyone was raving about Jack, a lot of people thought he would beat me, but I had no doubt all along that I would beat him.

All the hours we’ve had in the gym, I knew I could beat him, he believed all the hype around him, a lot of the media had got behind him, he’s a Sky scholar and was being mentored by Johnny Nelson, so they were all bigging him up, but that didn’t matter as I put him in his place in the final.

I hit him with all the clean shots, he was trying to force the pace, coming after me, I was just taking that little step back, hitting him, getting round him, feeling good and looking the part and took the unanimous decision easy.

A lot of people thought I was the boxer of the night, which went to Anthony Fowler, he put in a lovely performance and he’s had such a big year, so we’re both looking forward to the Commonwealths, I can’t wait to go there and do the business.”

“Even though it’s good to win the title, it’s been straight back in the gym and training hard.

I’ve put in so much hard work, especially in training down here at the TRAD TKO with Brian O’Shaughnessy.

I’ve been training with Brian for about six months and he’s really changed me, he’s added so much to my abilities.

Commonwealths is next, that’s in July, that’s what I am training with Brian for now, that’s what it’s all about, putting in all the hard work now for the Commonwealth Games.

We’ll have to wait and see where we go after that.”