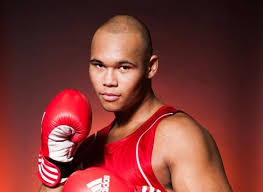 Frazer Clarke and Jack Bateson won gold and silver medals respectively in the 35th International Tammer Tournament in Tampere, Finland, at the weekend. Clarke enjoyed a unanimous win over Ruben Nazarryan of Belarus in his semi final, and went on to defeat Cam Awesome of USA in the super heavyweight final to continue his fine recent run of form. Bateson beat Belgian Dodji Ayigah and Tongdee Yuttapong of Thailand to secure a place in the final, where he was defeated by Scotland’s Commonwealth Games bronze medallist Reece McFadden, who also holds recent victories over Andrew Selby and Charlie Edwards.

David Price: “I will be Heavyweight Champion of the World”

After notching up three consecutive victories, Heavyweight David Price says he is now ready to start mixing with the top names in the division once again.

The Liverpool fighter, now believes that he can make another charge towards world honours and would even welcome the opportunity to face domestic rivals Anthony Joshua and Tyson Fury in the not too distant future. Read more on this strory here and watch the video.

Frank Buglioni has told Kugan Cassius that far too much emphasis is now placed on an unblemished record. The Enfield fighter is currently rebuilding following a surprise loss to Sergey Khomitsky in April, but he firmly believes that the loss will make him a stronger fighter in the long run.

“I think there is an emphasis on an unbeaten record nowadays and unnecessarily so” said Buglioni. Sometimes when you’re too worried about your record, and you dodge the right fights, it can leave the boxing public wanting a little bit. I’m in the game for exciting fights, to make plenty of money, and to try and be the best” Watch the full interview video here.

Paul Smith: “I proved I belong”

Liverpool Super Middleweight Paul Smith Jr has revealed he is ‘gutted’ over the WBO’s ruling on not to award an immediate rematch following the controversial scoring of his recent world title bout with Arthur Abraham.

Speaking via his twitter page, Smith said “Gutted that the WBO aren’t making a straight rematch. I do believe I’ll get the rematch voluntarily though. I’ve proved I belong up here”.

The British Boxing Board of Control have confirmed that the winner of the hotly anticipated contest between Billy Joe Saunders and Chris Eubank Jr, must face Nick Blackwell for the British Middleweight title within 90 days of November 29th. more here on Saunders vs Eubank

Paul Butler has a warning for Garnica

Ellesmere Port hero Paul Butler has warned Mexican, Ismael Garnica, that he is in for a brutal time come Saturday night, as ‘The Baby Faced Assassin’ plans to take the frustration of a postponed world title fight out on his new opponent.

“The last fortnight has been an absolute nightmare but, at this crucial stage of my career, I just have to get up for it”, said Butler. “The Tete thing is behind me now and I have to look forward. I’m still only 25, still young and fresh. It isn’t as if I was drinking in the Last Chance Saloon. There’ll definitely be future chances”.

“As regards the opponent, I didn’t even know his name until you just mentioned it. That’s how interested I am in him. His record says he’s been stopped twice and I plan making it three times on Saturday night. He’s nowhere near world level and I’m going to brutally dismantle him to prove that I was more than ready for Tete”.

“I craze that buzz again of hearing those words ‘…and the new……’ and walking around as world champion. Knowing my world title status is simply on hold, is what has got me through this”.

The weigh in will take place 2pm Friday at the Epstein Theatre and is open to the public.

Michael Katsidis is feeling confident ahead of his fight with Tommy Coyle in Hull on Saturday. Taking to his twitter page, the Australian posted “The last time I was 100% prepared Kevin Mitchell knew. I’m 100% ready now. He’ll know on Saturday. #AndTheNew”

Pat Barrett and Black Flash Promotions in association with BritishBoxers held a press conference today in Manchester to officially announce their ‘Homecoming’ show at the local Middleton Arena. Joined on the top table with Barrett was coach Paulie de Silva, and the boxers appearing on the night; Matty Ryan, who tops the bill in his hometown, Zelfa Barrett, Pat’s nephew, Des Gargano, Justin Newell, Reece Cartwright and Zahid Hussain. Joining them were boxing advisor Rick Manners and Peter Caines of BBTV, who will be screening the show live on this website. Read more, watch BBTV