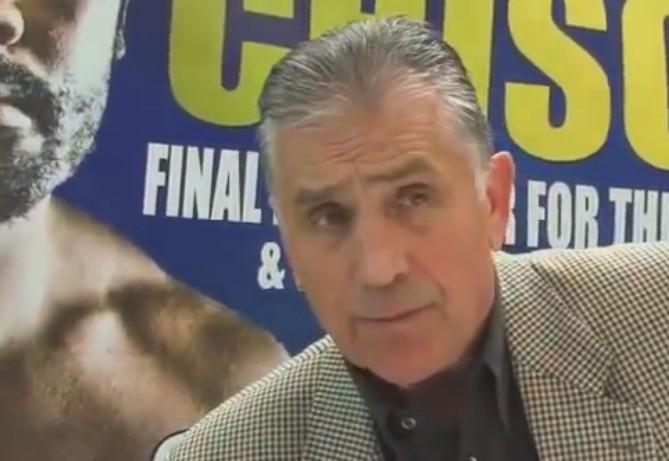 World renowned and highly respected British boxing trainer Jimmy Tibbs has seen it and done it and a bit more on top! Mr Tibbs has probably forgot more about boxing than most of us know and he is tipping his new prodigy the unbeaten Billy Joe Saunders to go on to fight for a world title this year! Watch the Video above for the full interview with Tibbs.

Here we review Saunders career and look ahead to his next fight, a dangerous encounter against unbeaten Italian Emanuele Blandamura for the European title at Manchester’s Phones 4 U Arena on Saturday 26th July. Hatfield based Saunders, is the current the British, Commonwealth and WBO International Champion.

Billy Joe Saunders has emerged as one of Britain’s best middleweights and a future world title contender.The Hatfield southpaw has a 19-0 record backed up with a fantastic amateur pedigree, and with the British and Commonwealth Middleweight titles already in his collection, it’s only a matter of time before this hard hitting Romany Gypsy gets his chance to move to the very top of the game.The active Saunders enjoyed a 2012 which propelled him from being a hot prospect to being seen as the real deal. He first won the Vacant Commonwealth title after powering through Tony Hill in just 30 seconds as professional boxing returned to the Royal Albert Hall before successful defences against Bradley Pryce and Aussie Jarrod Fletcher.

Saunders then added the Vacant British Middleweight title to his collection with a confident unanimous decision win over up and comer Nick Blackwell to round off a stunning year for the young fighter.

Moving into 2013, Saunders wasn’t showing any signs of slowing down as he put away veteran Matthew Hall with a comfortable unanimous decision before adding the WBO International Middleweight crown to his collection as he stole away Gary O’Sullivan’s undefeated record with a masterful performance.

The popular southpaw beat fellow Brit John Ryder in a British and Commonwealth title defence in September 2013 to move him one more defence away from winning the Lonsdale middleweight belt outright.

The 24-year-old is undefeated in 19 fights and is excited to be facing his third unbeaten opponent in a row, having already claimed the scalps of rivals John Ryder and Gary O’Sullivan.

Although he’s focused on Blandamura, the prospect of a potential showdown against unbeaten American Quillin for the world title is motivating Saunders to put on a career best performance.

“Every fight is crucial in my career and now that I’m within touching distance of a world title fight the pressure is on,” Said traveller Saunders.

“Of course, Blandamura is the only thing on my mind at the moment, but I know that I will have to put on a class performance to show that I’m ready to fight Quillin for the world title next. That’s the golden carrot for me, I’ve got to shine on the night and show I’m the best out there. Quillin is there for me to beat and I reckon he’s the most beatable of the champions. The way he fights will suit my style and I’d beat him 100 percent and I’d fight him anywhere, in his backyard or even a stable!.”

“Blandamura is a good fighter, he’s undefeated, and I give him respect for coming over here to fight, but he’s on for a hiding against me. I’ve seen what he’s said about me not being anything special, but he’ll find out on the night what I’m all about. Nothing gears me up for a fight more than when an opponent slates me and this guy has really riled me. He’s 34, ten years older than me, and he’ll feel it when I start piling the pressure on him. Will his old legs be able to handle a young fighter approaching his prime like me? He’ll buckle when I really lay it on him, but I look forward to seeing how long he lasts,”

“Claiming his 0 is another big factor for me. After beating Ryder and O’Sullivan, claiming the third unbeaten record is exciting for me. It shows that I’m not afraid to meet another undefeated fighter and I’ll put everything on the line to prove that I’m the best. Hopefully Quillin will be the fourth.”

Promoter Frank Warren added, “There’s a lot riding on this for Billy. It’s not just about the fight, it’s about the future. If he beats Blandamura then he’ll be in prime position for WBO Champion Quillin. I don’t want to get ahead of ourselves as Blandamura is a big fight for Billy. The Italian is tough, experienced, undefeated and he’s not afraid to travel, as his last fight in Germany proved. It’s now up to Billy to step up and show what he’s got and do the business against Blandamura on the night.”