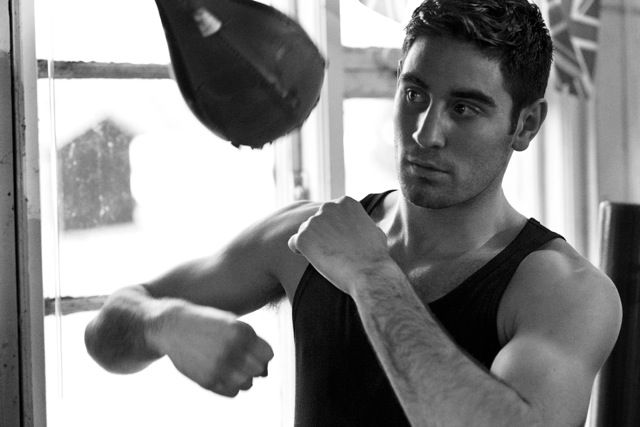 In the Ring Q&A Interview with Frank Buglioni

Exciting Enfield super-middleweight prospect Frank Buglioni is unbeaten in 6 fights, with 4 of his wins coming by knockout, 3 of those were first round blowouts. He is trained by Mark Tibbs at the TKO Gym in Canning Town and is certainly one to keep an eye on.

Frank is set to return to the ring at the ExCeL Arena in London on December 15th as he takes part in a six-round contest against Belfast’s experienced Ceiran Healy in what looks like being his last six rounder, before his team plan to move him upto eight round level in the new year.

He is said to be looking sharp in the gym, developing well and delivering what’s asked of him. when I spoke to his coach Mark Tibbs recently. Tibbs added that Frank has been gaining great experience in camp, sparring with the likes of Billy Joe Saunders and George Groves as well as some good Russian boxers, friends of Tibbs who have been putting the 23 year old through the paces.

Frank started boxing at the age of 14 at the Waltham Forest Amateur boxing club, he had a few fights before moving to the famous Repton Boys club at the age of 16. Under the guidance of Tony Burns he went on to achieve 2 national titles including the Golden Belt and the Class C Nabc’s. Buglioni had a come-forward ferocious style in the amateur ranks often trading punches in the centre of the ring, much to the crowd and his roaring supporters enjoyment.

After becoming a two time national champion Buglioni was then selected to fight for England at the age of 19. After gaining international experience with England and some more notable wins, Buglioni was put forward for trials to join the Great Britain Boxing squad who were based in Sheffield. After two successful trials Buglioni was selected for the Podium squad – the team in which the Olympians would be selected from.

Buglioni spent 18 months training with the team and travelled around the world in multiple competitions and training camps. After an illustrious amateur career which included over 60 fights with over 50 wins and half of which coming by way of knockout, He was given the opportunity to start his pro career with one of the worlds most renowned promoters; Frank Warren. He was also fortunate enough to have been selected to train in the Tibbs stable. Mark & Jimmy Tibbs the father son team, are famous East-London trainers with a track record of multiple world champions and currently a stable full of talent. Frank Buglioni trains along side; Kevin Mitchell, Billy-Joe Saunders, Colin Lynes and many other young prospects such as; Billy Morgan, Freddie Turner, Gary Corcoran, Charlie Hoy and Tom Baker.

We caught up with Frank this week to do our ‘In the Ring with’ Q&A Interview and find out more about him.
@britishboxers

Frank how did you get into boxing?

Originally I started boxing for extra fitness and strength as I was a keen footballer. I started at 14 at the Waltham Forest Amateur boxing club. However after a year or so, I decided to take up boxing full time.

Who/what inspired you in the beginning?
A mixture of things.
Best advice you were ever given?
Mark Tibbs – ‘Don’t cheat, but listen to your body.’ – Mark finds a way to balance hard training camps and busy schedules without making you over tired or over trained, he also highlights there is a fine line between being lazy and being sensible and resting. So far I have peaked perfectly for every fight.
Where do you train?
TKO at Canning Town, East London.
Who is your coach?
Mark Tibbs.
What was your amateur back ground and record?
I boxed for Repton for 5 or 6 years winning 2 x National Titles, I boxed for England numerous times and spent 18 months on the GB podium squad, Winning a Silver at the Commonwealth Federation Tournament in India, I had around 60+ fights losing 8 or 9. I stopped half of my opponents.

Who was your first coach?
A guy called Tony Taylor who at the time was working for Gary Johnson’s Target Fitness in Cheshunt.

Whilst on an international trip with Repton On the flight home from Cyprus Freddy Turner made the whole plane paper hats and made them wear them, including Tony Burns and all the air hostesses!

Craziest thing you’ve read about yourself?
On twitter, apparently sources in the gym I train at, have seen me get dropped regularly in sparring!
What is your day job?
I also work as a building surveyor.
Other than boxing what are your hobbies and pastimes?
I like to relax be watching films or listening to music. I also love spending time with my family, especially my 18 month old nephew. Looking after him for an hour is harder than training.
If you wasn’t a boxer, what would you have liked to be?
I would have loved to of been an Architect.
What was your best asset as a boxer?
My dedication is probably my best asset to me doing all the little things properly can make you a dangerous opponent. Anyone I face will know that I have done everything in m power to be the fittest and strongest I can possibly be for that fight.
What/Who inspired you?
De La Hoya & Arturo Gatti were my two favourite fighters growing up and they certainly inspired me, but I’m inspired more by my close friends and family that have worked hard for their success.
What was your Honey punch?
Probably my straight right.
Best opponent you sparred with?
Carl Froch & Billy Joe Saunders, both fantastic fighters.
Best prospect you have seen?
Kal Yafai, he has really impressed me so far.
Your favourite Ring walk music?
Seven Nation Army by The White Stripes.
Best fight you have seen live or on TV?
I thought the Kevin Mitchell John Murray fight was superb, especially as I was training in the gym with Kevin whilst he was preparing for that. But my all time favourite would be Castillo Vs Corralles 1. or Gatti Vs Ward 1.
If you could be ringside for one fight next year which one would it be?
Id like to beringside if Froch fights Cleverly. Or if the Mayweather Pacquiao fight comes off!
If the phone rang this afternoon with a Big fight offer who would the opponent be and where?
I havent thought about anything beyond my next fight which is the 15th of December at the Excel, but il be looking at the southern area Super Middleweight title sometime next year. Then move on as I improve and gain experience.
Best and worse thing about the boxing game?
Fight night is definitely the best thing having all your support sing and cheer for you, nothing beats that. The worst part is having to take time off, I get mild depression when I am not in the gym training and around all the fighters in my stable.
How did you deal with your pre-fight nerves?
I sit down in the changing rooms before the fight with Mark Tibbs and we discuss game plans and tactics and stay focused but also remain relaxed. If you have confidence in your preparation and your trainer then nerves are greatly reduced.
Best friend in Boxing?
Mark Tibbs, my trainer.
What rule would you introduce/change in Boxing if you could?
More random drug tests, drugs in sport could ruin the game and put a lot of peoples health at risk.
Toughest Part of training?
Staying illness and injury free during hard camps and sparring.
Toughest Opponent you faced?
A guy called Stephen Cevas in the amateurs, French national champion, I hit him with everything and he still kept coming. I won the fight on points that time round!
Other Sports?
I like to watch Chelsea when they’re playing. And I can hold my own on a table tennis table!
Favorite all time fighter?
Oscar De La Hoya
Favourite British fighter Past?
Joe Calzaghe
Favourite British fighterPresent?
Carl Froch
Your Website
www.FrankBuglioni.com
Facebook
www.facebook.com/TeamBuglioni
Twitter
@FrankBuglioni
Frank Buglioni Fight Highlight Video