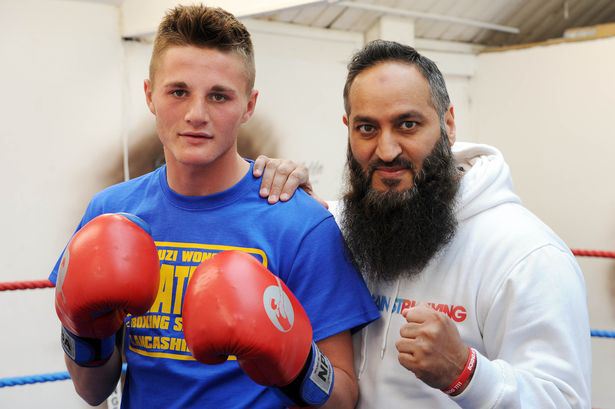 Made of Leather! Josh’s Dream of being world champion (Interview)

Teeside light-welter Josh Leather ruled England in the amateurs and intends extending that dominance in the paid code.

The 5ft 10in former ABA champion has already raced to four wins as a pro and steps up to six-threes level on Saturday at the Metro Radio Arena in Newcastle. He meets Liverpool’s Tommy Carus on the undercard to the IBF bantam showdown between Darlington’s Stuey Hall and unbeaten Ellesmere Port hotshot Paul Butler.

Last Friday, boxing writer Glynn Evans caught up with the 22 year old to discuss how his career is advancing.

Your twin brother Callum was also a national junior champion. What was it like growing up together?

We’ve been sparring together inside the house since we were nine years old. Drove me mam nuts!

We’ve always trained and sparred together since, driving each other on, motivating each other. Callum is the same ability as me. He won national Golden Gloves and schoolboy titles too but stopped boxing for a bit last year because he had a kid. He’s also a light-welter. Since coming back, he’s had five amateur bouts and won them all.

Middlesbrough has a reputation as a rough hard town; a good breeding ground for boxers.

That’s right. It can get lively on a night but, though I boxed for amateur clubs in Middlesbrough, we were actually raised in Guisborough which is just outside.  There’s a lot of hills which is fantastic for running and getting yourself really fit. There’s a lot of talented boxers up this way and really we should get more coverage.

What were the highlights of your amateur career?

Beating Robbie Matthews from Portsmouth to win the senior ABAs in 2012. He put up a good fight. Dean Powell was there and he spotted me and offered me to go pro. Initially I turned it down cos I was only young.

The previous year I’d lost in the ABA semis to Liverpool’s Sam Maxwell. He was very sharp with a good back hand but I thought I was unlucky not to get the decision.

I stopped a very good kid from up our way called Henry Thomas in the third round. I think I’m the only Englishman to beat him. I also knocked out Scott Jenkins in about 20 seconds in the CYPs. He’s unbeaten as a pro with the Hattons and is doing very well now.

Do you regret not staying on in the amateurs and trying to get a berth on England’s Commonwealth Games squad this summer?

Not really. It got very frustrating beating these top lads yet not really getting anywhere with the Team GB set up. I was on the Development Squad up at Sheffield but wanted to get among the Podium boys, go on the top trips.

I kept waiting, kept waiting but it just didn’t happen for me. After Dean made his approach, it was always in my head to turn pro. It was getting harder and harder for me to make 60 kilos.

Still, I wish all the boys luck. I think Maxwell and Anthony Fowler, another Scouser, will do well at the Games. They’re both really top notch.

Dean Powell, your initial manager, tragically passed away prior to your debut. What influence did Dean have on you in your short time together?

He was a top man who really looked after his boxers. He rang me up every week to see how I was, how training was going. It’s very sad he never got to see my debut.

You’re coached by Imran Naeem, a new face himself. As a national champion, you could’ve had your pick of the top coaches. Why did you opt for Imran?

You need to work with a coach that you trust 100% and that’s the relationship we have.

Imran had a few amateur bouts himself and he’s been in the game for 15 years now. He knows where I’m going wrong and puts me right. He’s new to the pros so we’re learning together. He’s always willing to learn more. I’d not go anywhere else.

Jason McClory manages me, Andy Bell’s my agent and I’ve a strength and conditioning coach. That’s it. We’re a small, tight team.

You’ve had four pro starts, four wins. How have you found the transition?

It’s been good. I’m enjoying the journey. I’ve fought a couple of really good journeymen – Jason Nesbitt and Dan Carr – in my last two and I’ve learned a lot about the pro game from them. I know now that I need to slow down, take my time and pace myself, particularly as I move up to six round level. Dan was talking to me constantly through the fight, trying to wind me up but he was sound afterwards.

I’m really looking forward to weighing in the day before fights from now on. That’ll allow me to be much stronger in the ring and to put more power onto my shots. It’ll make a big difference.

The Metro Arena could become a fortress for rising north-eastern prospects such as yourself and Bradley Saunders. You fought there last time on the undercard to Stuey Hall’s IBF title defence with Martin Ward. Good venue?

It is a good venue but unfortunately I was the last fight on at 12.30am and everybody had gone home except for my 180 fans. Hopefully, I’ll get on TV this time. It’s another massive show for the area and we’ve some good lads coming through from up here.

I did a bit of sparring with Bradley for my debut. He’s very strong and powerful; hits very hard even with the big gloves on.  I’d love to top the bill at the Metro myself down the line.

On Saturday you meet decent Scouse southpaw Tommy Carus, who’s won six out of seven. What would represent a successful night for you?

Just a win to move me forward. I dream of being a world champion one day so I want to give a performance that’ll show the fans what I’m made of.

This is the first southpaw I’ve fought as a pro but I met loads in the amateurs and I’ve always handled them quite easily. I’ve had a full week’s sparring with Freddie Turner, a light-middle, down at the TKO Gym in east London. We did 32 rounds in four days which was ideal preparation.

I’ve caught a few clips of Tommy Carus on You Tube and he likes to counter punch. I’ll just get stuck into him and hopefully do the business.

Finally, why should boxing fans keep an eye out for Josh Leather?

Because I’ve got fast hands and I train very hard. Boxing’s my job and I take it very seriously, put everything into it. After 10 fights, I want to be contesting titles.