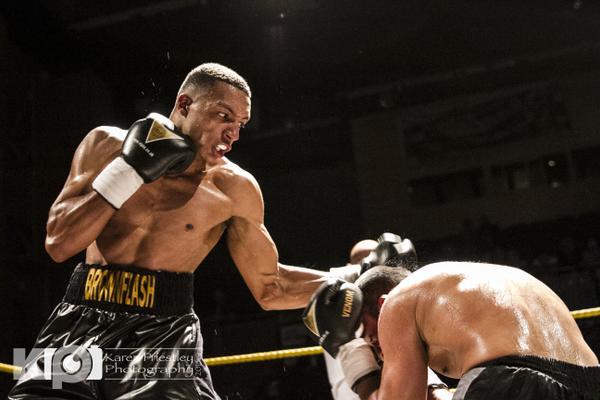 Mancunian Mexicans, Cast Iron Welterweights and blazing flashes of brilliance are just some of the macho delights that were on offer at the Middleton Arena in Manchester on Saturday night. Black Flash promotions returned in the third televised outing on our channel BBTV LIVE – which was broadcast free on britishboxers.co.uk

In the grand scheme of things it was a fantastic night of boxing entertainment and the turnout was great, despite coming up against the FA cup final and the pay-per-view show on Sky, where top of the bill Kell Brook stopped Frankie Gavin. But for all those who came to Manchester, worked, boxed and supported the show, we appreciate the commitment to our grass roots boxing show.

The event was dedicated and payed homage to a man credited as “The Godfather” of Manchester boxing, Brian Hughes, whose sizeable contribution to the pugilistic arena started over 60 years ago when he established the famous Collyhurst and Moston boxing club and his input to the game shouldn’t go unnoticed. The gym, now commanded by former charges Pat Barrett and Thomas McDonagh, produced a galaxy of renowned professional champions and now is well on it’s way to breeding a new selection – embodied by last night’s combatants showing.

At the top of the bill, Middleton favourite Matthew Ryan took on Bolton’s Chris “Twinny” Jenkinson in a scheduled six round affair. Ryan gained the points win over 6-rounds against his former amateur rival in an entertaining encounter. Ryan has not failed to disappoint on these “Black Flash” promotions outings and last night was no different as he pleased his home-town fans again who cheered him on to victory.

Zelfa Barrett fought the experienced Ibrar Riaz, a man synonymous with toughness who has only been halted three times in an eighty-five fight career. The slick Barrett again used his smooth skills and fast, hard shots with good effect, to dominate the contest. Riaz is a great servant to the game and did his best to give Barrett a test in his 5th pro outing, but The Flash was rarely troubled and shown a display of how to hit and not get hit, the basis of what boxing is about. There are many good things being said about Barrett and up to now he is backing them up. You get the feeling though the better the opponent the better Zelfa will get. At the moment he is learning the pro game with regular fights and when he is ready to make the step up, he will take the super-featherweight division by storm.

Cameroonian Commonwealth games Bronze medallist The African Warrior Blaze “The Lion” Mendouo made his professional debut in front of the Middleton fight faithful, facing off against Hungarian Isvan Orsos who he outpointed over 4-rounds. Mendouo has worked hard to slim down to the Cruiserweight class, having previously boxed at Super heavyweight as an amateur. Mendouo’s Bronze Medal speaks volumes for his talent and his fantastic support who came out to watch and support him all went home happy. Watch out for this lad, he could be a real force to be reckoned with in a cruiserweight division just waiting for someone to grab it by the scruff off the neck.

Another fighter not unfamiliar with the weight loss process a is Salford’s Chris “Fatboy” Monaghan, who faced off against former Matthew Ryan foe Kevin McCauley in a light middleweight fight which presented Fatboy his second paid challenge win. This happened to be the fight of the night and McCauley who looked like he was ready to upset the apple-cart and came to win. The away fighter, who advised he needed to leave the venue early to attend his sick father in law in Nuneaton, sprung out from the first bell and really put it on Monaghan, catching him cold with a big right hand, that woke ‘FatBoy’ up and made him realise immediately that McCauley wasn’t here to go through the motions and wanted to take his head off and get back on the M6 home. Credit to the Black Flash fighter though who after a shaky first round got into his rhythm and used his strength and nice boxing skills to take control and the win on points over 4-rounds. You get the impression there is plenty more to come from the FatBoy.

Moston’s Michael Gomez Jr after being out of the ring for over 8-months, admitted it was the first time he had felt such nerves going into a fight. He was taking on tough Hungarian youngster Aron Szilagyi in his third professional contest, but he boxed a good fight and dominated the action with his cute boxing skills, without really getting out of first gear. It is great to see Gomez Jr back and the sombreros in the crowd, he has now shook off the ring rust and under Black Flash Promotions had re-ignited his fledgling career, there is plenty more to come from the Manchester Mexican!

Blackburn’s Qasim “Qast Iron” Niaz was a late addition to the show, after Sean Ben Mulligan pulled out a week prior with an ear injury. Niaz was taking on “Mr reliable” Kristian Laight over 4-rounds in the opening contest of the evening and won with relevant ease on points to take his unbeaten record to 8-0. Niaz a a real slick boxer, he has a nice selection of text book shots and the odd unorthodox ones and has the talent to go far

Calling the action on the night was the BBTV familiar duo of Barkery Jammeh and Jamie Albrecht and they were joined by special guest commentator, former British Champion and world title challenger Michael Jennings who did the show proud with their combined knowledge and no nonsense comments. Post fight interviews were conducted by a poorly Terry Dooley, who braved it and left his sick bed to be there.

The show all in all was a great night for all in attendance, with pre fight entertainment from Chorley female vocalist Emelina James and her beautiful dancer Geraldine. We also had local Manchester Hip Hop star J, Chambers performing tracks from his new album. All in all it was a great night and the cherry on the cake was when a merry Wally Dixon, the former promoter, said he thought he was in Las Vegas! He had a few though!

Join us for the next show on Friday July 31st, contact us here to pre book tickets, we will also be streaming the show live here on BBTVLIVE.

Watch last nights full uncut show on the video above. Boxing fights start at 1:19 mins in