Around and about with Tommy Dix: York Hall to Newcastle

Last weekend, December 3rd – 4th, I visited ex boxer and my friend Jessie Keogh, it was a cracking weekend. On Saturday evening we attended the great small hall show and the matchmaker deserves credit for the great job he did.

I was very interested in how Michael Devine performed in his bout with defending Southern Area lightweight champ Ben Day. Well Michael put on a virtuoso performance to win the title in two rounds. I was impressed with his work off the jab. Though Day tried to frustrate Michael, Michael was in command and was all business in awesome fashion.

I had met Michael Devine at the ‘Black Flash Promotion’ at the Fusion the week prior in Liverpool and it was a bonus for me to see him crowned Southern Area Lightweight Champion at York Hall.

On the Sunday Jessie and I attended the London Ex Boxers meeting at the John Black Inn, Islington. What a turn out. I sat at a table with Jessie, his pal Mick Williamson (the cut man) and ex Liverpool heavyweight Billy Aird. I also met Sylvester Mittee, Colin Lake – who I knew from my association with Munro / Hyland Bros, Ivor ‘The Engine’ Jones, Dixie Dean (he could fight!) and Harold Alderman.

Jessie had got me a signed copy of Sammy McCarthy’s book and what a pleasure it was when I met Sammy, what a lovely man. I told him how when I was a paper boy at Sylvia’s in Brook Street, Chester, I used to get the ‘Ring’ mag. It was 1 /6 or 1 /9 then every month and the Boxing News, I think it was 6 pence and it was then out of my paper round money and in 1954 Sammy McCarthy’s photo was on the cover of that month’s ‘Ring’ magazine.

Then I had the pleasure of meeting up with that wonderful Liverpool with welterweight boxer Tony Smith whom I had not met since I used to watch him at the Stadium. We talked about his bouts with Wally Smith, Johnny Cooke, Larry Baker and Albert Carrol – that wonderful glove artist from Bethnal Green. My mind went back to the night Tony and Albert fought and what a wonderful exhibition of the noble art it was, so many memories came flooding back.

Well I had two gloves signed, one of which will be a raffle prize at the next Venture ABC show. I thank all for the wonderful time I had last weekend, especially Jessie Keogh. Yes it was a wonderful weekend.

I am also looking forward to a pre Christmas treat, yes it’s the Black Flash Promotion in Newcastle on 17th December. 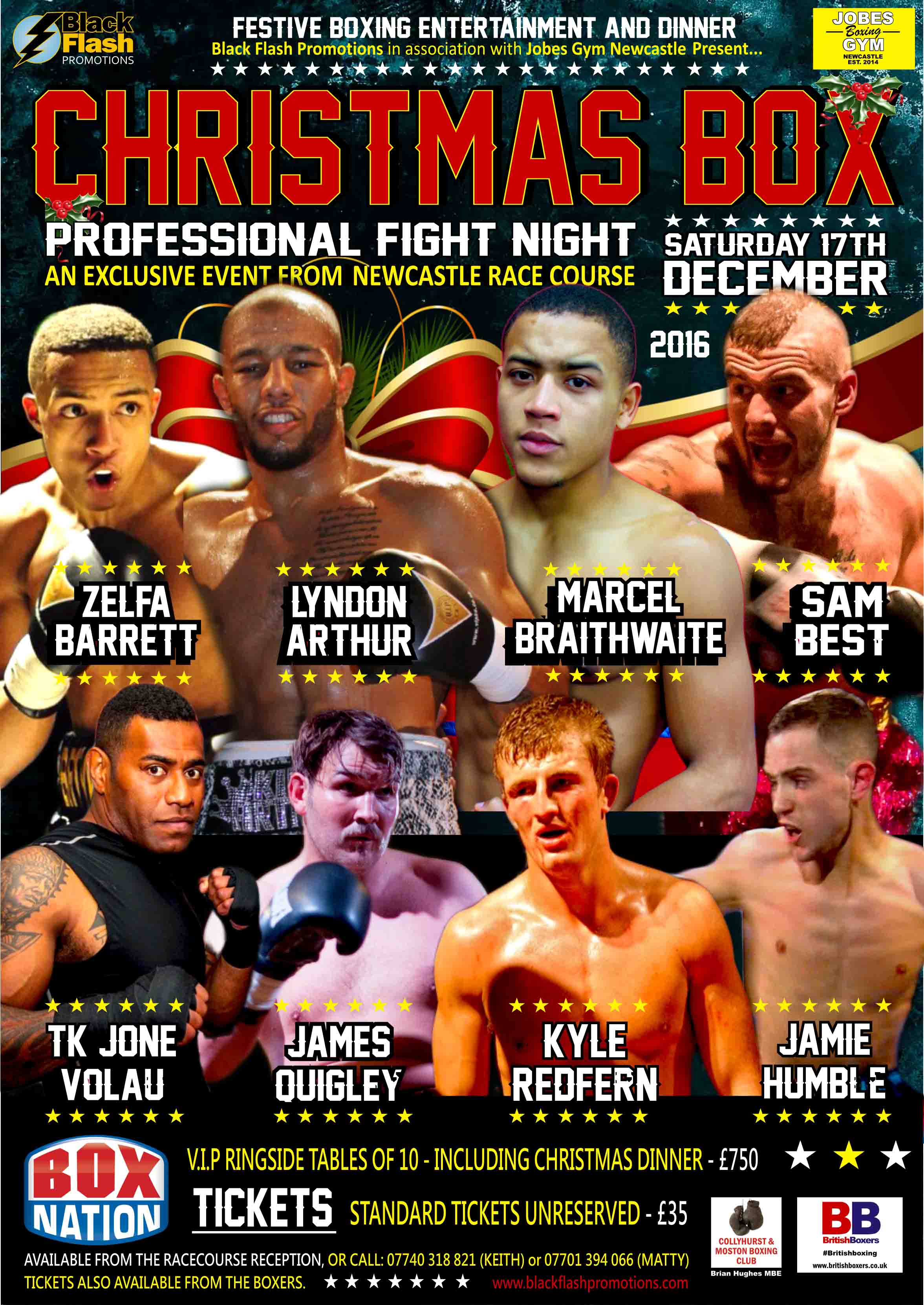 Three of the North West’s top prospects – Manchester’s Zelfa Barrett, his cousin Lyndon Arthur and Liverpool’s Marcel Braithwaite will be strutting their stuff and what prospects they are I can tell you. I have been invited up to Newcastle and I hope to make the trip.

Zelfa is one hell of a boxer/fighter, knowing him as I do and seeing his attitude of listening and a willingness to learn I feel he is a champion in the waiting as is Lyndon, it’s all there for them to succeed, they have what it takes, it’s up to them.

Marcel is also a boy of immense natural talent and is also a very intensive listener. I have been impressed with his undoubted talent and ring craft. It is years since I have seen boxers block punches with their shoulders and deflect punches with their elbows like Marcel does. I have heard on the grapevine that Marcel excelled in sparring with an ex world champ, to be quite honest I was not surprised.

The North East fans who attend the Black Flash Promotion on 16th December have a feast in store. I also look forward to seeing the North East prospects on the bill too. In particular I like the look of the young unbeaten Sam Best, the Newcastle lad trained by Matty Jobes. And I am sure there will be a few others on the bill worth having a look at in the North East, like Manchester and Liverpool, they breed them tough up there.

I wonder if my old friend from Middlesborough Graham O’Malley will be present? Now that boy went in with some real top class boxers. See you there, until next time.