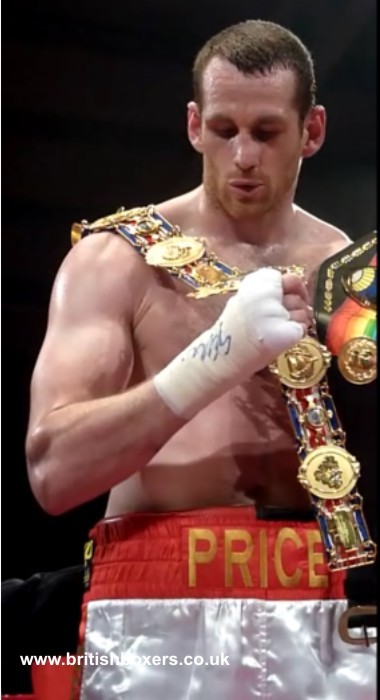 Price returns to Liverpool with Bellew, Smith and Fielding

Heavyweight favourite back on Merseyside on June 26

David Price will fight in Liverpool for the first time in two years at the Echo Arena on Friday June 26 as part of a huge bill live on Sky Sports.

The popular Heavyweight joins an all-star cast with World-rated Super Middleweight’s Callum Smith and Rocky Fielding in crunch clashes against Christopher Rebrasse and Brian Vera respectively, while Tony Bellew closes in on a first World title shot at Cruiserweight following his victory over bitter rival Nathan Cleverly in November.

Price’s last outing in his hometown was his rematch with Tony Thompson in July 2013, and the 31 year old has since notched four wins in Denmark and Germany with three KOs, a run of form that has landed him a European title fight with Erkan Teper with purse bids set for next week, and the former British and Commonwealth champion believes he’ll bring his best to the ring on June 26.

“This homecoming means a lot to me,’’ said Price. “I’m buzzing to be back in Liverpool and back fighting at the Echo Arena. It’s been longer than I had anticipated but it will be well worth the wait to be part of such a big night of boxing for the city.

“My last fight in Liverpool didn’t go as planned but that’s ancient history now. It’s behind me and I’ve moved on. I’m in a better place now than I was two years ago, and on June 26 people will see a much-improved fighter. The one-punch knockout artist is still there but now I’m a more polished boxer. I’m more relaxed and I’m enjoying my time in the ring. I’ve been working tirelessly in the gym, and I’m relishing the chance to get back under the bright lights and back fighting in front of my home fans at the Echo Arena.”

“I’m delighted to be back in Liverpool with this huge card,” said Eddie Hearn. “The domestic Heavyweight division is really gathering pace now it’s great to see David Price returning to Liverpool for the first time in two years and I’m pleased as always to be working with Team Sauerland to help make this happen on Sky Sports. That relationship has enabled us to work closely on a number of fights, with Tony Bellew set to face IBF Cruiserweight champion Yoan Hernandez later this year.

“It’s a massive fight for Callum Smith against Christopher Rebrasse for the WBC Silver Super Middleweight strap. Victory will put him in a final eliminator to become the mandatory challenger for the winner of Badou Jack vs. George Groves for the WBC title. Rocky Fielding faces a massive step up against Bryan Vera who has mixed with many of the top boys at 160lbs and 168lbs. Rocky is ranked across all the governing bodies and victory on June 26th would put him with in touching distance of a World title shot.”

“We’re delighted to be working with Eddie Hearn and Matchroom Boxing to bring fans a massive night of boxing on June 26,’’ said Price’s promoter Nisse Sauerland. ‘’David’s homecoming has been a long-time coming. Over the past two years, he has been gained valuable experience fighting overseas and now Liverpool’s heavyweight hope is ready to return home.”

Callum Smith’s clash with Rebrasse for the WBC Silver Super Middleweight title represents an acid test for the hotly-tipped 25 year old. Promoter Eddie Hearn said Smith was ready to be “let off the leash” after he returned to the ring with a first round KO in Birmingham last weekend, and in Rebrasse he meets a fighter that will ask him tough questions. The Frenchman has travelled to England before when he took George Groves the distance for the European title, and Smith expects the toughest night of his career.

“He’s going to be the best that I have boxed in the pros,” said Smith. “He’s only lost three times and they have all been on points, he gave George Groves a really tough fight and I don’t think that the scorecards reflected how close the fight was. He’s big for the weight and it’s a really competitive fight for me and it will be interesting to see what level I am at after the fight – I think it’s the perfect fight at the perfect time.”

Fielding’s meeting with Vera promises to be an all-action affair as the Texan comes to Liverpool boasting a CV with wins over current World Middleweight king Andy Lee and former World champions Serhiy Dzinziruk and Sergio Mora. Fielding returned to the ring in March from an eight month absence through injury, and the 27 year old is itching to test himself against the visitor.

“Vera is a big step-up for me,” said Fielding. “He has some great wins on his record and he’s tested some really big names, so for me to get a win over him on my record would be a great statement.”

Following his win over Cleverly, Bellew swapped Liverpool for Hollywood as he took part in the filming of Creed, part of the Rocky film series, but now the 32 year old is focussed on his day job with a World title clash with IBF king Yoan Hernandez mooted for the autumn as he takes on the experienced Czech Lubos Suda.

“I’ve settled into the Cruiserweight division nicely and I am ready to take a World title shot,” said Bellew. “There are some tough, tough fighters with belts in the division, but I believe that I can beat them and get my hands on their titles.”