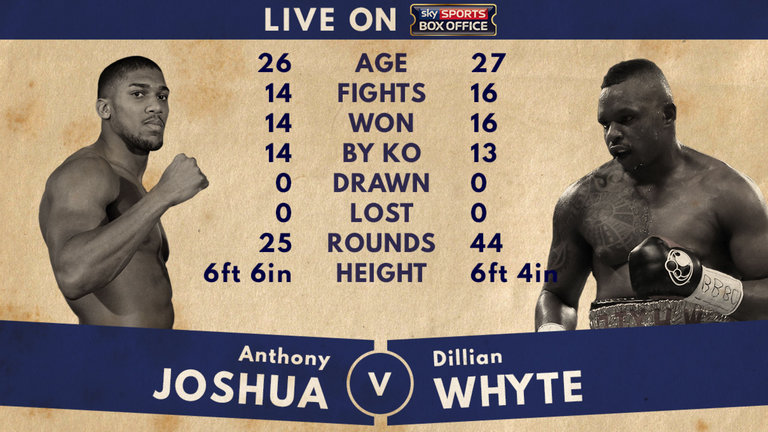 “Don’t count Dillian Whyte out in this fight, don’t be surprised if he beat him. I think Dillian Whyte is gona bring it and I think he gona get the upset!” Deontay Wilder.

WBC heavyweight champion Deontay Wilder is tipping Dillian Whyte to upset the odds and defeat Anthony Joshua when the pair of unbeaten Brits clash for the British and Commonwealth Heavyweight titles at The O2 next weekend (December 12.)

Looking at his options at heavyweight Wilder spoke about unbeaten British boxer Anthony Joshua and commented on his world ranking and if he sees the Brit as a legitimate opponent; “Joshua is ranked number two for some reason, I don’t think he has really proved himself to get to that high.” Wilder told US boxing journalist Radio Rahim. (video link here)

“It’s like, who has he really fought to get to that point. You know but there are many ways to get ranked its just the politics of boxing, the business of boxing as I say.” continued Wilder.

“Everybody want their guy if they got the goods to get to the top real fast. I don’t need to go more into that, it is what it is and soon he will be a mandatory of mine and I’m looking forward to that.

DO YOU AGREE WITH WILDER – PREDICTION?

“Out of the two (Fury and Klitschko) I want Fury, he got the remainder of the belts and my main goal is to unify the division.” added Wilder.

“There hasn’t been a fighter who unified the division since 1999 and that was Lennox Lewis it’s been well over a decade now so I want to put my name on there.

“When they have a rematch I want the winner of that who ever them belts fall in the hands of thats who I want.”

“I think Fury wins again, I just feel father time is knocking at the door for Klitschko, you can only fight for so long and abuse your body in camp and in fights for so long, it’s time to give it up!”

Anthony Joshua will be looking to avenge the defeat Dillian Whyte inflicted on him in the amateurs in 2009. It was Joshua’s 3rd vested fight and former kickboxer Whytes debut contest as a boxer. Both are unbeaten as professionals and their roads cross again now, 6 years down the line.

WATCH: THE FULL AMATEUR FIGHT BETWEEN JOSHUA AND WHYTE HERE.

Whyte might’ve beaten Joshua at amateur level, but it’s pretty clear who the bookies fancy this time around. Joshua is a valueless 1/18 with Paddy Power, while Whyte is 15/2 to claim another victory. The draw is 33/1.

Both Joshua and Whyte scored KO wins in their last fights in September, with Joshua picking up the Commonwealth title against previously unbeaten Gary Cornish, while Whyte stopped American Brian Minto to land the WBC International Silver strap to ensure their simmering rivalry will come to a head in Greenwich next weekend.

This fight is being shown on Sky Sports Box Office.