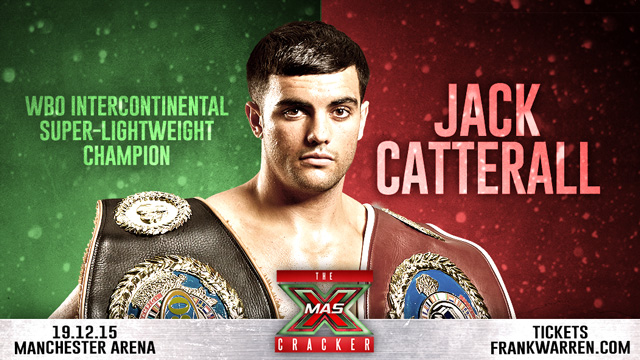 “ONLY A VERY SMALL PERCENTAGE REACH THE VERY TOP. I INTEND TO BE ONE OF THEM!”

The bull strong 22 year old southpaw is unbeaten in 13 and already rated seventh by the WBO after relieving several notables of their undefeated status.

‘Ideally, I’d love a chance to fight for a world title eliminator in 2016 before challenging for the Big One in 2017,’ says the reigning WBO Inter-Continental king who joined the pros under rising Stockport coach Lee Beard whilst still a teenager.

‘Ok, some fights wouldn’t make sense at the minute cos there’s still a few gaps I need to breach.

‘I’ve not seen a lot of (Argentina’s IBF boss )Cesar Cuenca if I’m honest but he’s certainly not a fight I’d shy from and I’d be particularly suited to (current WBA titlist) Adrien Broner. I rated him at 130 (lbs) but he’s not the biggest at 140. Even I’d have an inch or two on him and his style would suit me perfectly. I’ve sparred a lot with (ex IBF Super-Featherweight champ) Argenis Mendis who also has that shoulder roll.’

Plenty would feel it is premature for the humble and hardworking Catterall to be mentioning his name alongside a quadruple world champion at this stage, especially in light of his laboured 10 round shut out over Finland’s 12-0 Jarkko Putkonen, in his last fight in October.

‘I’m my biggest critic, never pleased, and I know my last performance wasn’t my best,’ concedes the compact 5ft 7in Catterall.

‘But I went 10 rounds for the first time against another unbeaten fighter and felt in total control throughout. It was all a bit too easy. I dropped down to his level and was a bit flat.

‘Putkonen arrived fit, strong and undefeated. Had he come to win, shown some ambition, I’d have been better able to showcase what I can do. It was the same with the two Argies (Cesar Inalef and Gabriel Calfin) I fought before him. Ideally, I’d love to fight a tough, big hearted Mexican who came for war.

‘To be honest, I expected a lot more from the Finn. I know I’d fight to the death to defend my unbeaten record.’

The Lancastrian’s volatile left cross and brutal body attack have left eight victims obliterated ahead of schedule – most notably world class amateurs Nathan Brough (rsc2) and Thomas Stalker (rsc8) – but Catterall claims to be a Jack of all trades once he steps between the ropes.

‘I’ve already shown my strength and power but my skills and defence are hugely undervalued,’ says the one-time CYP champion and England amateur rep who served a brutal apprenticeship as a spar hand in several major US fight gyms.

‘I’m not in boxing to take punches. My technical qualities will only really be savoured when I face an ambitious opponent who comes to win and throws plenty of shots at me. I know from sparring top, top guys like Floyd Mayweather and ‘Canelo’ Alvarez that I’ll always perform best against better opposition.’

Despite his lofty world ranking, thus far the man they call ‘El Gato (The Cat)’ has mysteriously been overlooked for domestic honours.

‘Right now, I believe I’m the number one in Britain and I’m very happy to prove it,’ he says.

‘I know the calls have been made to Tyrone Nurse (Huddesfield’s reigning British champ) and John Wayne Hibbert (recently crowned Commonwealth boss) but, so far, we’ve not been able to lock anything down. I’d have happily challenged either on the 19th.

‘Tyrone and me would be a brilliant Roses battle. I rate him. He’s got good skills but I’m confident I’d be too strong and would break him down. And I’m more than ready for Lenny Daws (the veteran ex British champion who challenges for the European title this weekend). Hopefully, I can force my way into the mandatory slots and force those fights.’

A serious contender for the 2015 Young Boxer of the Year award, joltin’ Jack intends to conclude what has been another hugely educational semester with a sizzling second defence of his Inter-Continental title against a challenger to be named on the salivating ‘X-Mas Cracker’ bill at Manchester Arena on Saturday 19th December.

‘My focus was on learning every day in the gym with Lee. Every opponent is different so every camp we focus on new techniques, fresh strategies. Only a very small percentage reach the top in boxing. I intend to be one of them.

‘I’ve also had good learning fights, beaten two southpaws, gone 10 rounds for the first time, taken another unbeaten record and emerged injury free. Hopefully, I can sign off with another win in impressive style.’