Boxers of the Past: Howard Eastman 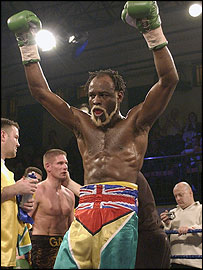 Howard Eastman arrived in London as a young boy after being thrown out of his home by his father and was forced to sleep rough and catch tube trains to keep warm, he eventually found boxing and a way out.

With his bright blonde facial hair and a London flat filled with parrots, he was an eccentric character alright! Eastman was such a talented boxer and a real entertainer and became a fans favourite. When he was switched on and performing at his best he was a joy to watch and very hard to beat.

He won British, Commonwealth and European titles before moving onto the world stage.

In April 2001, Eastman had accumulated a 31-0-28 KO record and was matched up against Birmingham’s Robert McCracken to defend his British and Commonwealth titles. Eastman prevailed, eventually stopping McCracken in Rd 10. (McCracken went on to become Eastman’s coach and they formed a strong lasting bond after their dust-up in the ring.)

His talent and achievements eventually drew interest from Don King and he was signed up by the legendary American promoter. In November of that year, he challenged William Joppy for the vacant WBA world title in Las Vegas on the undercard of a Lennox Lewis bout but eventually lost a majority decision. Eastman dropped out of the game for a while to let his contract with king expire.

In 2002, Eastman was back in action, this time under the guidance of Hennessey Sports promotions, recording some impressive victories along the way, notably picking up the European title.

Eastman became the nearly-man, having never won a world title but he was a very strong and accomplished fighter who was very exciting to watch. Along with the likes of Herol Graham, Michael Watson, Pat Barrett, Eastman becomes one of the best British boxers never to win a world title.