Bradley Skeete talks about his next fight against Shayne Singleton 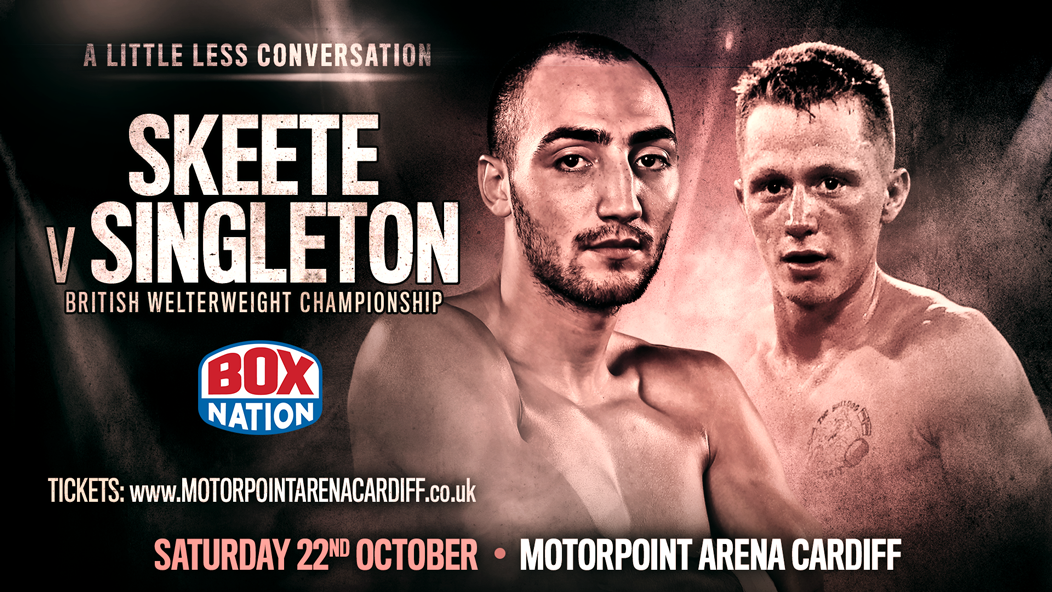 The Penge punch picker is flying up the world ratings – Bradley Skeete ranked sixth by the WBO and seventh by the IBF – and with seven of his last nine victims failing to finish, the stylish south Londoner has finally added potency to his purity.

Self belief was coursing through the 28 year old champ’s veins when he spoke to Glynn Evans about his forthcoming first title defence against Colne’s Shayne ‘The Pain’ Singleton on Frank Warren’s monster Cardiff promotion next month.

Last time out, you destroyed France’s former European light-welter challenger Alex Lepelley in the seventh of a WBO European title defence. How did you assess your performance?

Overall, I was happy.  I got rounds in the bag against a tough opponent with a good record who had only been stopped once before.

The WBO European is a belt I’m proud of but, personally, I’d have preferred to have defended my British. I want to win the Lonsdale outright as quickly as possible.

Going from the high profile title fight against (Sam) Eggington in his back yard, to a routine fight was difficult. I trained just as hard but, mid rounds, Al (Smith, his coach) told me to stop treating it as a spar.

So it was good to prove I could jump on an opponent and go through the gears. I was pleased with the punch variety I used to get Lepelley out of there. Not bad from someone who supposedly can’t punch!

Motivation certainly shouldn’t be an issue on October 22nd when you make the maiden defence of your British title.

Nah, psychologically I’m right ‘on it’ with my British title at stake. I desperately want the (Lonsdale) Belt outright so the title defences mean everything. I know every challenger will desperately try to take what’s mine so I’ll be training really hard.

Now I’m British champion, my confidence is sky high.  I’ve already had some great sparring – I’ve just done a 12 rounder – and we’ve still three more weeks to get our tactics ‘spot on’.

How do you feel about returning to the Welsh capital?

The Welsh fans clearly love their boxing and I got a great reception – in the town centre as well as in the arena – which put me in high spirits before the fight.  I’m really looking forward to going back there. My London fans are also keen to see my first British title defence. The tickets are flying out.

What do you know of challenger Shayne Singleton?

To be honest, I’ve not seen a great deal of him. I’m aware he got stopped in five by Sam Eggington but that was a while ago. No doubt there’ll be pressures to do a quicker number on him than Sam managed but styles make fights.

Shayne’s got a good record (23-1) and some good wins like Curtis Woodhouse and Adil Anwar. He’s got fast hands, good movement and, given the notice he’s had, we expect he’ll bring his A game.

But I’ve seen it all before; those that come to rough me up, those that come to run away. I’m ready for anything. If Shayne gives me the charge, I’ll box his ears off. If he picks and pokes, happy days. No domestic welter can outbox me. I should definitely be stopping him.

Everyone seems to view me as a long strip of p*** they can just rough up. Wrong! To get to my ‘puny’ body you have to get past my jab and it feels like eating a right hand. Once they’ve munched on a few of them they all quickly change their tune.

You talk about your desire to assume permanent custody of the Lonsdale Belt and, if you come through against Singleton, you would require two more wins. Who might the challengers be?

One thing I have to stress is that all these numpties who slag me off on social media, are slung right to the back of the queue. Shayne hasn’t slagged me off at all and I respect him hugely for that. That’s why he got his chance.

I’d like to tidy up my record against Frankie Gavin because I still believe that I won our first fight. But I’ll not go chasing him. He got knocked out by Kell Brook and now he’s got nothing. He needs me more than I need him. I learned from that fight and moved on.

Dale Evans is fighting Mike Towell in an eliminator this weekend so whoever wins that will be in the frame and I’d honour Eggington with a rematch. He took his defeat like a man, no moaning, no excuses. Big respect for that.

So what treats do you intend delivering for the Welsh fans next month?

I’ll be hoping to deliver another strong, solid showing. The quality of performance in Cardiff is almost as important as the result if I’m to force myself into the frame against the big names.

In camp, I’ve been working hard on winning all the rounds convincingly rather than just edging them which is probably where I fell short against Frankie Gavin. I need to prove these domestic level types don’t deserve to be in a ring with me. I have to show I can get them out of there.

Go to HERE to see how you can watch this fight and more live!