Golovkin beats a game, out-gunned Brook in five in London 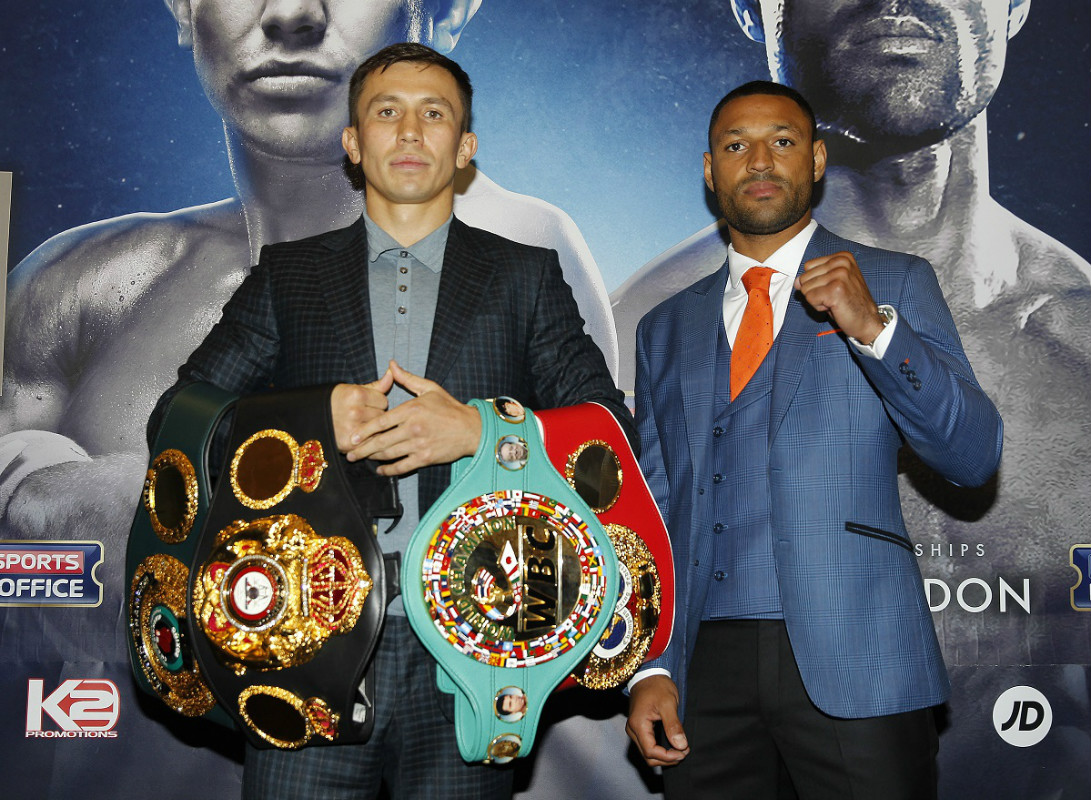 David Bowie, playing Nikola Tesla in Christopher Nolan’s The Prestige, said: “You’re familiar with the phrase: ‘Man’s reach exceeds his grasp’? It’s a lie: man’s grasp exceeds his nerve”. By stepping up two divisions, Brook certainly showed a lot of nerve in a bid to grab most of the middleweight marbles.

The 30-year-old challenger bounced out to All Of The Lights, his regular ringwalk tune, looking solid and focused, his eyes fixated on the O2’s ring—the place where either his dreams would come true or he would fall into the nightmare world that Golovkin, 34, conjures up with his two-fisted, threshing machine assaults.

Golovkin looks like a choirboy, only he would be Edward Norton’s priest-killing choirboy from the movie Primal Fear—a smiling yet cold-eyed assassin who cheerfully beats up opponent after opponent with something bordering on a glib, dominant glee. He came out to Seven Nation Army by The White Stripes, an opponent will either have to call on Old Father Time, boxing’s perennial undefeated foe, or fight like a 10-man army to knock him off his perch.

Brook, though, fell short despite landing solid shots in round two and fighting through a swollen, angry looking right eye, trainer Dominic Ingle threw the towel in round five to save him from further punishment. He had failed to furnish a feel good movie finish to his first fight at the new weight, a real-life Rocky story never materialised. Just like his bitter domestic rival Amir Khan—who was knocked out at Canelo-weight (155lbs) in Las Vegas in May—Brook‘s gamble did not pay off in the way he wanted it to.

To Brook’s credit, he rolled the dice rather than sitting on his IBF welterweight crown and stepped in with the man who many feel will sit in middleweight Valhalla once the dust settles on a career that has been devastating, but has yet to become as storied as the ones enjoyed by Marvin Hagler, Sugar Ray Leonard, Thomas Hearns and Roberto Duran—all lucky enough to have each other to bounce off, and bounce punches off.

“Ezekiel” (now 26-1, 25 early) needed a freewheeling style, something to make “GGG” think—and to his credit he found one early—yet no one has been able to give Golovkin (36-0, 33 KOs) pause for thought or derail his freight train. Losses invariably come, often when least expected, so we will probably see the formidable fighter fall at some point.

Indeed, when talking to Tom Hagan, the cool Consigliere played by Robert Duvall, in Godfather II, Michael Corleone, a note perfect Al Pacino, said: “If anything in this life is certain, if history has taught us anything, it is that you can kill anyone.” Boxinghas taught us that empires fall, records collapse almost everyone loses, so let’s hold fire on how Golovkin deals with true adversity, should he find it, before placing him among the Gods, but, as a Choirboy, he is at least in the right neighbourhood for deification.

Tyson Fury aside, British boxers are currently in the same position that British teams were in during the early days of the Champions League, struggling to adapt to the higher, some may say elite, level. Khan, Carl Froch, versus Andre Ward, and now Brook have tried and failed to get those punctuation mark wins, Liam Smith and Anthony Crolla are waiting in the wings, they meet Alvarez and Jorge Linares in the coming weeks.

We have a lot of world titlists, one divisional ruler and a strong contender in IBF World Super middleweight titlist James DeGale, so we are still a win or two from hashtagging #Britishboxingtakingover, but it is good to see so many British fighters mixing it at the higher level. The results are bound to come.

Back to domestic matters. Sadly, and this is boxing for you, Golovkin and Canelo will probably meet once it is too late, just like Floyd Mayweather and Manny Pacquiao did. Brook and Khan looks more likely down the line but no longer has the same luster.

However, both Brook and Khan dared to dream only to be handed a pair of nightmare results for the British fans who are still waiting for a fight between two former welterweights turned probably light-middles. A 154lb showdown throwdown, anyone?

One disappointing aspect of the night was the frequent use of adverts. British boxing fans paid £16.95 to Sky Sports Box Office for the fight yet that the powers-that-be argue cannot be generated by the revenues brought in by normal Sky TV. If you pay your money you take your chances, and the chances are that the ebb and flow of every SSBO show will be jarred by advertisements.

Sure, use them between fights, but some of us like to listen to what is going on in the corners between stanzas so why not cuts us a break and leave them intact rather than throw commercial tat at us at crucial times.

We tolerate it on non-PPV nights, but boxing fans get rinsed week in and week out, at least let us watch the fighters get rinsed down and give us the opportunity listen to the corner instructions.