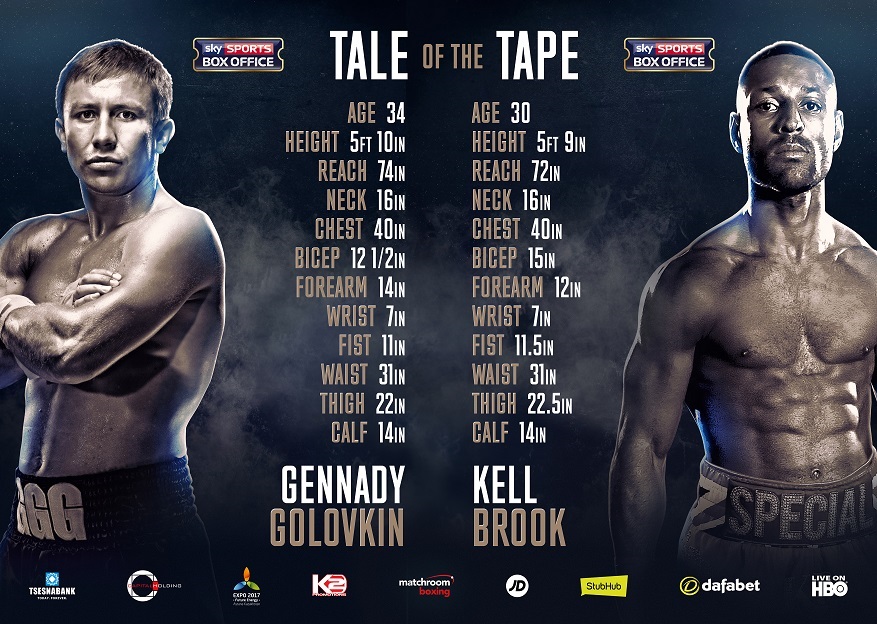 As previously reported, Gennady Golovkin stopped Kell Brook in five to retain his IBF, WBC and IBO world middleweight titles. Brook had some bright moments, particularly in round two, but Golovkin (36-0, 33 KOs) was too much for him on the night and Dominic Ingle, Brook’s trainer, sensibly threw in the towel when his man was under duress. The particulars talked to Sky Sports Box Office about the fight.

“I wanted to bring the brig drama show because I know Kell is a huge, big fighter, but he is not a middleweight—it is not his weight,” admitted Golovkin.

He added: “I am a boxer, I am open for anybody—I want unification fights. I would like [WBO holder] Billy Joe Saunders, because he has the WBO belt. I would 100% (come back to London).”

“I am devastated,” said Brook. “He can punch, but I expected him to be a much better puncher. I was seeing four of him at a time when I was settling into it because of the eye (injury).”

“Believe me, I hurt him. In a fight, you can see every movement of a fighter—and I saw his legs buckle. No one will fight him, I will fight him again,” he added, to huge cheers from the pro-Brook British crowd.

Golovkin will power on. Brook said he plans to drop to 154 and would like the winner of WBO holder Liam Smith versus Saul Alvarez, which takes place in Texas next Saturday night.

“When you’re in with Golovkin taking too many shots…,” said a raspy Dominic Ingle before trailing off when asked why he had asked referee Marlon Wright to stop the fight.

“His eye socket was gone, he was seeing three of him,” explained Brook’s promoter Eddie Hearn, taking over from Ingle, who was clearly struggling to get his words out due to barking out instructions throughout.

“[The WBC’s] Mauricio Sulaiman told me he was ahead on the cards,” he added. “You’ve got a man, his health is at stake, but he will be back in big fights in the future.”

“That was a brave decision—although not a popular one with the fans—because you’ve got to think about the fighter,” chimed Johnny Nelson, summing the ending up for Sky Sports Box Office.