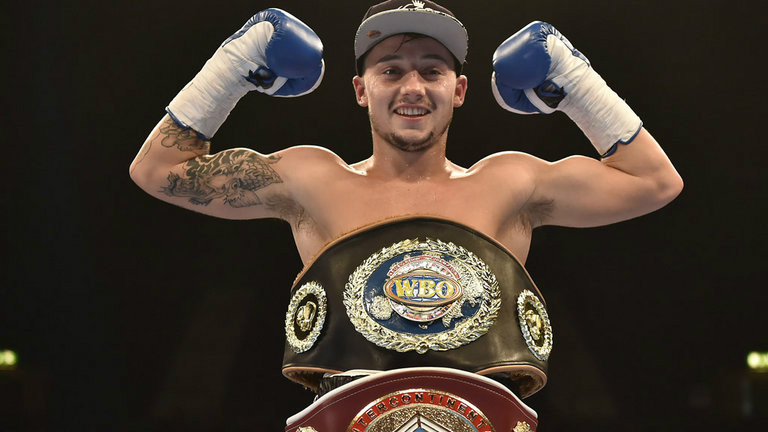 On 19th December 2015, Mitchell Smith (13-1, 7 KOs) was left devastated after losing to George Jupp, a decision defeat over 10. Smith left the Manchester Arena that night feeling as though he was at rock bottom, but in his own words from that point onwards: “The only way was up”. Now, nine-months later he prepares for a comeback fight in his hometown of Harrow and is ready to get back on course to set the record straight.

Mitchell Smith made his professional debut at York Hall on 6th January 2012 and won via TKO against James Ancliff. It wasn’t long before he had amassed a strong following with his fan friendly style and a charisma that shone through outside the ring, as well as in it. He won the Southern Area super featherweight title in his seventh fight and continued impressing fans and pundits alike.

Next up for “The Baby Faced Assassin” was a fight against undefeated Mark Evans, in what was perceived to be his first real test. Mark Evans was the Welsh Champion at the time, undefeated, and claimed to have no fear at all in reference to the supposed power that Smith held in his gloves. Two rounds later, a real statement was made as Smith looked phenomenal in winning via knockout at York Hall.

Following this fight, Smith again underlined his position as one of boxing’s rising stars as he won the English title on a points decision against previously undefeated Peter Cope. Now proving that he was able to go the distance and be dangerous over more than just a few rounds, it was onwards and upwards for Mitchell.

He won the WBO European Super Featherweight title next against Zoltan Kovacs. Shortly after, he won via a spectacular KO against Antonio Horvatic (this would later be awarded as Knockout of the Year). Mitchells confidence continued to grow and peaked when he took out Dennis Tubieron inside a round, a fighter who had previously gone the distance with domestic featherweight rival Josh Warrington.

Now at 13-0 and looking ahead to the big fights that now seemed within his grasp, “King Mitch” was matched against Jupp. He had previously sparred against Jupp, so was confident that this was going to be an easy night’s work. The fight was delayed due to an injury Smith received and they eventually fought on December 19th, as part of the undercard of Andy Lee’s WBO middleweight title defence against Billy Joe Saunders. It all came crashing down for Smith, as everything caught up with him at once and he lost for the first time in his pro career.

Last week I was able to sit down and speak to Smith to discuss the loss, how it affected him, and how he plans to move forwards from this point.

In the aftermath to McGregor beating Nate Diaz in the rematch at UFC 202, ‘Win or Learn’ was a mantra that was being repeated on social media. I asked Smith if he felt that this had applied to him, he replied: “I would like to think so. In terms of looking at last year’s statuses and things on Twitter, compared with interviews this year, I think people can see that I have calmed down a bit. I have chilled out, I have learnt, and I have humbled.”

The change can be credited in part to Adam Booth. Smith decided to move to Booth and asked him to be his new full time trainer following the fight, in a bid to rejuvenate his career and push on to the heights that he himself expects to reach. He told me: “I think in boxing not only do you have to be a good trainer, but you’ve got to know what makes each fighter switch on and what doesn’t. I’ve been trained mentally by Adam, as well as physically and I think that’s brought a better person out of me, and made me a better fighter.”

Booth is one of the most respected trainers in England and is most recognised as previously being teamed up with former unified Cruiserweight Champion and WBA heavyweight titlist David Haye. Smith is well aware that Booth won’t put up with anything but full commitment, and has previously said that: “He has not tried to change me as a person because he likes the fact that I am confident and have banter. It is nice that he has not tried to change that, but he has laid down the ground rules, which are:  ‘When I’m talking, you listen and don’t talk over me, and when I tell you to do something you do it’. As long as you can do that he is happy for you to do what you do.”

I asked Mitch if his relationship with Frank Warren had changed since the loss. Warren spoke very strongly about the loss in is interviews post fight, but Smith insists that the relationship is all fine. “We had a chat, I told him I fucked up, I didn’t train hard enough,” he admitted. “I got young fighter of the year, KO of the year, beat Tubieron and it all escalated. I didn’t think I would but I let it all get to my head. It’s a learning curve at the end of the day.”

This time last year Mitchell was in Thailand as part of a reality TV fishing show which featured other high profile stars such as Ricky Rayment from ‘The Only Is Essex’, he told me: “I’m getting in decent shape now, I’m sparring well, eating well, and I’m at a stage in my life now where I know what I want. This time last year I was in Thailand, then I came back still wanting to party.” This obviously had an impact on his shape going into the Jupp fight, he had messed around with the weight and then he paid for it.

Before the fight, Smith was dealing with a lot of issues that were unpublicised at the time, which now looking back explains a lot of his behaviour going into the fight. He says he was carrying the extra weight, taking anti-depressants, sleeping tablets and dealing with bad anxiety. He has never been a stranger to trash talking, and it is one of the things that has drawn in a lot of interested spectators, whether it be fans or not.

For the Jupp fight, he seemed even more aggressive in the way he was speaking to the quiet and passive Jupp, and this it seems was ultimately down to the pressure that built before this fight, that hadn’t been experienced prior. I asked Mitchell if we could expect to see more trash talking in the future, to which he replied: “I spoke too much last year, but a bit of talking here and there makes the fights interesting. I don’t see there being much change in the ring, I still think you’ll see me being comfortable, cocky and confident in front of the camera. But I won’t be disrespectful to my opponents. That’s definitely something I’ve learnt.”

I asked Mitchell if he had achieved the wins against the likes of Tubieron whilst not being fully focused, if that now gave him confidence moving forward with Adam Booth. “Tubieron was always gonna be a test, Jupp boxed out of his skin the night be beat me, but I still don’t think he’s over British level,” answered Smith. “I don’t mean to be disrespectful, it’s just if you look back at the night I lost, and you look at me normally you can see the difference. Mentally you can beat yourself. With the Tubieron fight, I was in the changing rooms ready to bring the Hulk out of me. Then with the Jupp fight, I was just flat, negative, wondering about what could go wrong. I was never going to win that fight.”

The first time I saw Mitchell fight was at York Hall, he walked down to the ring with sunglasses on, a leopard print jacket and singing along to ‘Champagne Supernova’. It’s very rare to see such confidence exuded from such a young fighter, but it was clear that Smith had star potential from the beginning. I reminded him of this when we spoke, and he told me that this is the kind of confidence that he is looking to get back—we should see it again in the ring soon.

Now that focus has been regained and Smith is ready to kick on, there are plenty of big fights to be made domestically. Liam Walsh campaigns at Super featherweight and Ryan Walsh campaigns at featherweight. Both brothers have been very vocal about fighting Mitchell in the past, and due to all being promoted by Warren, the fights should be considerably easier to make.

Smith, though, does admit that he needs to get some wins under his belt first before he can begin calling for the big names again. Josh Warrington is another fighter that has been extremely vocal about Smith in the past, although it is yet to be seen how comfortable he would be fighting down at featherweight. He assured me that he has the right structure to do it, and that a nutritionist has advised him that it is feasible; though it’s likely the fight would need to be worth it in the long run for him to consider the drop.

Boxing fans have plenty to look forward to if Mitchell Smith can fulfil his potential and get his career back on track. A few wins under his belt and the Jupp fight will be a distant memory, that’s just the sport of boxing. The journey begins again on October the 8th at Harrow Leisure Centre when he looks to prove the doubters wrong and make it all the way to the top.