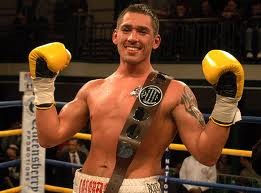 Conquest, the Commonwealth Cruiserweight Champion and Smith, the Southern Area Super-Featherweight Champion, will be announced to the crowd pre-match and get involved in half-time activities.

The pair both feature in big title action at the Copper Box Arena on Saturday 12th April when Conquest defends his title for the first time and Smith steps up for the Vacant English title when he challenges Peter Cope, live and exclusive on BoxNation (Sky Ch. 437/HD 490 and Virgin Ch. 546).

Romford star Conquest is honoured to be asked to go on the pitch.  He said, “It’s unbelievable that West Ham have asked me to come along to the match to be introduced to the crowd.  When I was a kid into football it was my dream to play for them and come out onto the pitch, but I was never ever going to be good enough to be a pro footballer.  Luckily I’m better with my fists so through boxing I have made it onto the pitch, so in a way I’ve achieved my dream!”

Mitchell, who also holds the Southern Area title, said, “I’m at the ground week-in-week-out watching the team so it’s a real honour to be announced to the crowd and show off my Southern Area belt.  I hope to come back with the English title next time, I’m confident of beating Cope to win it, but my dream would be to bring the British title here.”