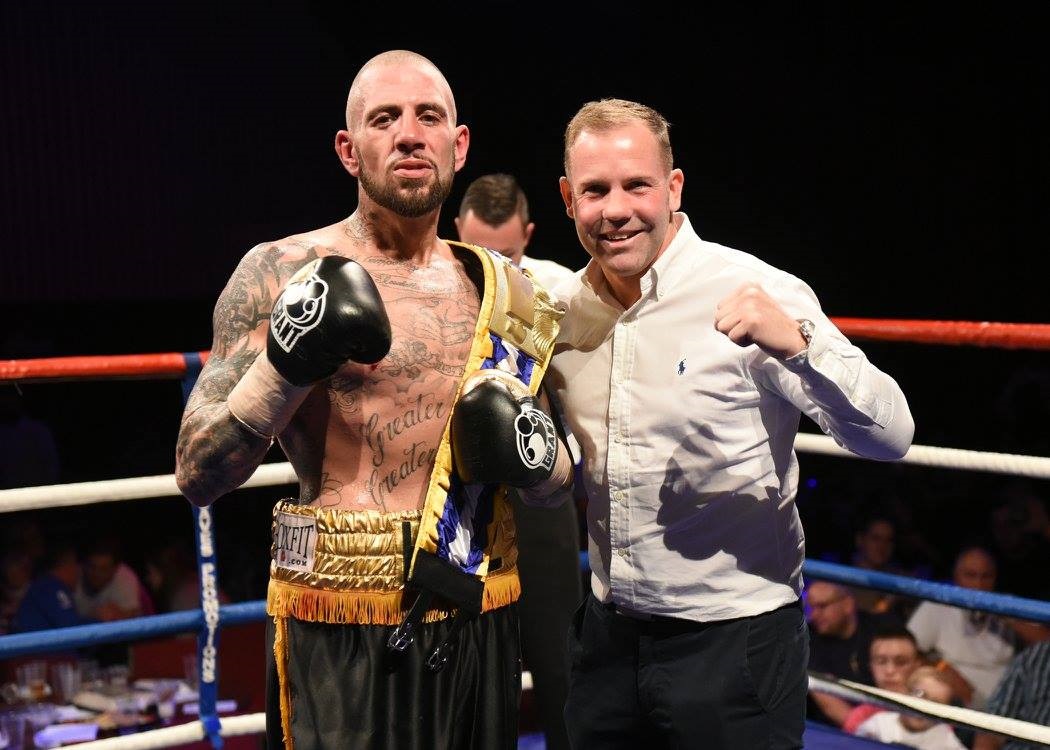 It was a successful night for Basildon’s Paul Hilz (3-2) on September 23rd as he got back to a winning record and claimed the International Challenge super-middleweight belt with a points win over Lewis van Poetsch (4-46).

The home fighter kept the Grays Civic Hall fans on the edge of their seats throughout the eight-round contest and had their hearts thumping nervously as he hit the deck in the final round.

Despite the late knockdown, Hilz took the decision 77-75 on points to claim his first belt in the paid ranks.

“He hit me on the back of head in the eighth and had me down on all fours,” said Hilz. “I got a count for it which is just one of those things, and I don’t think the ref could see where the punch had landed from where he was.

“The scores were 77-75 but without that knockdown, it would have been just right, even the ref said the scores didn’t do the fight justice.”

Travelling fighter van Poetsch, 25-years-old from Gloucestershire, was the far more experienced of the two going into the contest with twice as many wins on his ledger.

Although the journeyman ‘Poochi’ marked his 50th professional fight with yet another defeat, the veteran had previously triumphed over unbeaten prospects and shared the ring with English, British and Commonwealth champions in his four-year long career.

“That boy didn’t let me do much because he knows just what to do in there,” said Hilz. “I caught him early on and he didn’t want to get tagged again.

“I couldn’t get nothing solid on him and he was moving away so much, I just couldn’t pin him down.

“My trainer Kevin Lilley said to me that you’re not going to pinpoint him so use your clean jabs, he knew what he had to say to me and it worked, so it was all good and we was victorious.”

Hilz joined boxing late and enjoyed a successful stint in the thriving unlicensed boxing scene in Essex, winning 12 of his 14 fights and collecting the IBA British and European cruiserweight titles.

Aged 32, he turned professional under Carl Greaves’ management back in 2014. It was his second crack at a Challenge belt, previously falling short in his last challenge for the British version to Scott Douglas (2-3-2) in December 2015.

The newly-formed Challenge belts were developed in place of the now defunct Masters titles.

“It’s one of the only titles that I could win as a professional and I done it,” beamed the father of four. “The only thing that’s left for me to do would be to fight on a big stage, so the phone is there and if I get the call, I’ll pick it up.”

The four-fight card in Grays hosted by Carl Greaves Promotions also showcased exciting young middleweight prospect Tey Lynn Jones, who moved up to 5-0 on his record.

Backed by the famous TV nightclub Sugar Hut and roared on by an army of fans, ‘Teystey’ rewarded them all with a stunning second-round stoppage victory over 21-year-old Derbyshire boxer Tommy Carter (1-3).

The upset of the night was the maiden loss for home fighter Idris Hill (5-1), his trainer rightfully throwing in the towel in the eighth-round after sustaining a bad jaw injury.

The victor, Danny Parsons (5-3), is a product of the successful Queensberry Boxing League in Surrey, securing his second professional belt—the British Challenge super-lightweight belt—in consecutive fights, both by stoppages in the final round.