A View From The Valleys: Nathan Cleverly, broken bones and buckets of spilled blood 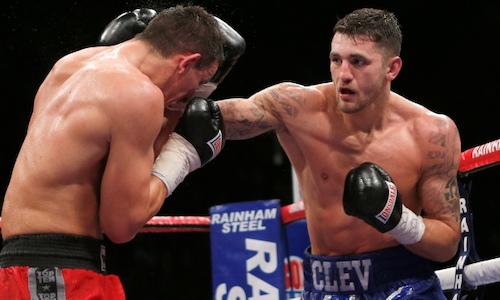 “He’s okay, mate… but doesn’t want any pictures,” was the warning from Anthony Leaver, Matchroom Boxing’s Head of Media. He was taking me backstage at the UIC Pavilion in Chicago to see Nathan Cleverly after his blood-flooded brawl with America’s adopted Pole, Andrzej Fonfara.

I’d been reporting from the first row of the second tier. The only other inhabitant of the secondary press section was a Japanese journalist, there for the WBA super-fly scrap between Kohei Kono and Koki Kameda. Obviously, I could tell from my positioning that I wasn’t very valued by Al Haymon’s then multi-million dollar Premier Boxing Champions [PBC] operation.

It was quite a good view from our vantage point, though. I was elevated, so could see in to both corners and had a perfect angle to see the uppercut that broke Cleverly’s nose. That punch changed the course of a fight the Welshman was leading at the halfway pit stop, it also meant the colour of his face would reflect his claret shorts.

Still, I was unprepared to witness the state Nathan was in afterwards. I quickly realised why Anthony informed me of the no picture policy. Though he was in okay spirits, it’s a sight nobody wants to see a boxer in. “Alright, Dew?” he sighed, welcoming me to the changing room and putting his arm on my shoulder to rest for a second. I tried to conceal my feelings, unsure whether I was being effective or not.

Eddie Hearn rightfully reassured him that the public’s reaction, through the medium of Twitter, was very positive. Nathan’s nose wasn’t the only thing broken as a new light-heavyweight punch statistic record had also been set. It had been a right ding-dong, a gutsy and genuine Fight of the Year candidate.

Aside from Warsaw, there are more Pole’s in Chicago than any other city in the world, including the rest of Poland’s cities, according to a taxi driver I met. Most departed the sparsely populated arena very soon after Fonfara’s decision win was announced. It was another hour until Cleverly would follow, despite doctor orders for the ambulance to take him straight away.

In that time, the swelling took its course and got worse. Nathan’s forehead, lips and left ear made the nose the last of his worries. Nathan’s agent, Ian Bird [or Birdman as he’s known], argued with an employee of Warrior’s Boxing, urging them to speed things up. It wasn’t until their main man, Leon Margules, arrived that things got going.

Yes, it was a defeat but there was something in seeing what Nathan went through that reassured me he still wants this, badly. After losing the unbeaten record and WBO belt to Sergey Kovalev in 2013, Nathan genuinely considered retirement. After a forgetful pay-per-view rematch with Tony Bellew, the failed cruiserweight experiment led many to again question his desire.

If October’s effort doesn’t answer doubters, not much will. Surely they’re satisfied of Nathan’s desire to fight now but at what cost? It took broken bones and buckets of spilled blood, sacrifices many couldn’t make, to restore his reputation to the point it had been in 2011.

That reputation had taken several knocks since Cleverly inherited the world title that Juergen Braehmer abandoned five years ago. The German first delayed the mandatory defence by agreeing to unify with then-WBA champion, Beibut Shumenov… only to withdraw the night before the fight, which was actually on my 19th birthday. Then, he failed to board a flight to London to face Cleverly, for reasons that are still unclear and have changed at different points.

Was the belt a poison chalice? There was a correlation between the belt and bad luck, plus it was difficult to secure defences against any recognisable names. The most memorable episodes of the reign were a fierce rivalry with Tony Bellew, who enjoyed publicly undermining his adversary’s achievements for a long time, and Sergey Kovalev. The less said about that episode, the better.

In the meantime, there are more miles on the clock but lessons have been learnt, or at least should have been, that a previously green Cleverly didn’t know of. Now he gets a second chance against the very man his first run at world level should’ve started against.

Saturday’s fight is for Braehmer’s WBA Regular title, the organisation’s secondary accolade, with the aforementioned Kovalev owning their ‘Super’ status. However, taking away the belt conundrum, if Cleverly wins in Neubrandenburg then he would still have beaten an opponent in the top five of almost all independent rankings.

Crucially, nowadays there are plenty of world champions in Britain. Any outside pressures as a flag bearer for Welsh and British boxing wouldn’t be half as intense as during his first reign, when the only other belt holders were Ricky Burns and Carl Froch.

On the other side of the equation, Braehmer now seems a lot more stable. He’s not had any more legal problems that often plagued him in the past, switched promoters from the defunct Universum to Sauerland Promotions and even began training others, too.

Style wise, they remain polar opposites. 29-year-old Cleverly operates in the orthodox stance, has a good gas tank, though lacks the power for a one-punch finish. Braehmer is a southpaw, often starts well and fades down the stretch, plus carries a deeper dig.

It’s an intriguing matchup and body language may be the deciding factor when the judges are scoring the bout, a key factor for Cleverly given that he’s a challenger on foreign soil.

I’ll be in Germany for the fight and I think Nathan will do enough to be given the nod on points. He’s the most live opponent Braehmer has faced for some time, arguably since his last loss in 2008 at the hands of Hugo Garay. The champion turns 38-year-old four days after the fight and the five-year delay could hamper his chances more.

Following Cleverly’s career has provided more ups and downs than I expected. Here’s hoping there were reasons for all of the experiences and plenty of post-fight photos to be taken after the next installment.