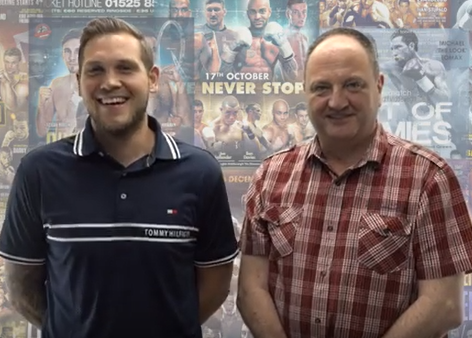 The festive event will provide Church, 27-years-old from Essex, with just his second fight this year due to setbacks with injuries and illnesses.

“My next fight is on December 3rd at York Hall, called ‘Christmas Cracker’, confirmed Church. “I’ll have the best training camp I can ever have and it will be the best performance I can ever give.”

The 175-pounder has had a stuttering start to his professional career plagued with setbacks including injuries, sickness and cancellations since debuting back in July 2014 at the Grays Civic Hall in Essex.

He was due to make his debut appearance under the Goodwin Boxing banner on July 16th at the York Hall but suffered from an illness in the weeks preceding the show.

The Witham resident, trained by Mark Massow, thought he had hit rock bottom following yet another withdrawal but received a boost from sponsors MB Surfacing that will now allow him to train around the clock.

Business owner Church previously struggled to balance the two professions together, he said, “Trying to run a business at the same time as training is too hard, but luckily my sponsors have helped and it’s worked out alright.”

Church, first turned pro with a win over Curtis Gargano (0-1-1) in July 2014, followed up four months later with a second victory over debutant Haidar Sadik–both bouts took place at Grays Civic Hall in Essex under the Carl Greaves Promotions banner.

Then, Church suffered a defeat at the hands of Angelo Crowe (2-6) after an extended absence from the ring in June last year due to injury, which led to an even longer hiatus after that and resulted in a stalemate with Mitch Mitchell (6-46-2) in his comeback fight almost 12 months later.

Then, just days ahead of his next scheduled fight in July this year, Church was struck down with a bug again, he explained, “I was due to fight last July but in the week before the fight, I got ill again.

“I know now that it’s down to cutting weight and running myself into the ground with working and training at the same time.

I got just couldn’t do anything at all. I couldn’t train, couldn’t eat, and couldn’t get out of bed.

“Afterwards, I felt like it was a bit of a joke as it keeps happening all the time and I couldn’t see a way around it. I actually said to a few people afterwards that I was thinking of quitting boxing.

“I went away on holiday to clear my head and just last weekend I met with MB Surfacing who have agreed to sponsor me enough to allow me to train full time.”

The father of one went on to say, “I’ve got freedom to train all day now, I can move around gyms to get the best sparring, I’ve got a nutritionist on board, great team around me and top sponsors supporting me fulltime.

I want to fight four or five times next year, it’s got to happen now as I’ve been a professional for a long time but only fought four times.

However, I’m still only 27 so I’ve still got plenty of time. I’ll have this next one as a four-rounder, then maybe a six-rounder next March.”