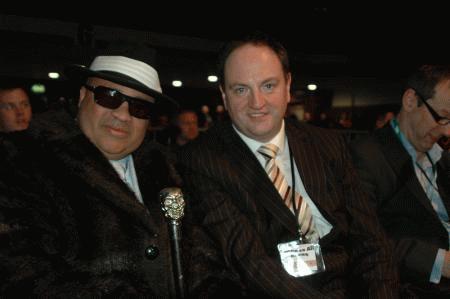 The recent promotional renaissance in British boxing that was spearheaded by Eddie Hearn and the Matchroom Sport outfit founded by his father Barry, has not only led to something of a changing of the guard in the sport at the highest echelons, it has also paved the way for a new breed of fight figures to begin establishing themselves in what is a crowded, yet soon to be healthy marketplace.

One of the fastest growing and successful promotional outfits in operation at small-hall level is Goodwin Promotions, fronted by the affable Steve Goodwin. The company have just had their 5th anniversary show at York Hall, Bethnal Green. The family-run outfit is approaching the business of boxing with a model based on working for their boxers, and is expanding all the time, establishing a loyal and trusted stable.

I had a chat with Steve, who gave me some time to discuss the business generally, the formation and future of the firm and that social media interview by former charge, Luqmaan Prince Patel.

Hi Steve, thanks for giving us some time. You’re a busy man. Your “We Never Stop” slogan certainly seems true.

(Laughs) Yes. Between license meetings today for a couple of our new boxers and negotiating a spot on an undercard later this month at Madison Square Garden for someone else. I’ve just been on the phone to America regarding that, been extremely busy, so yeah……a crazy day!

Perhaps we could start by telling the British Boxers readers a little about the formation of Goodwin Promotions and what it was that prompted your foray in the world of boxing?

Well, we began five years ago and it all really emerged as a result of my daughter (Olivia) becoming ill. She was diagnosed with cancer as a teen and she said that should she get well, there were a few goals she wished to accomplish. The first was to fly a helicopter over New York. I thought “well, that’s easy”, so we did that. The second was to jump off the tallest building in Hong Kong, so we did that! And the third thing was to become a boxing promoter.

So you set out to help her achieve that too?

That we did. And once she had the OK we set off down that route. It started off with a 4-fight card in Milton Keynes, and to be honest I didn’t really know what I was doing. After a little while I began to think that the business wasn’t really for me. After a couple of bad deals I was prepared to wind it all up. But then I had a change of heart, because by then, despite all that, I’d got the bug. I thought if I can just survive long enough here, as I’m a financial adviser by trade, I can bring some of the things into the sport that I’ve felt were missing, such as ethics, decency, honesty, transparency….all of the good stuff.

It can’t have been an easy ride, especially with no TV deal? However your hook up with Matchroom on the “Fight Pass” platform is surely of benefit?

It probably wouldn’t be worth it if it was easy! Though, yes, we’ve waged against and fought and battled and we are now at a stage where numerically I’m the second largest boxing manager in the UK. The entire Goodwin team are putting on more than 20 shows this year and we’re expanding beyond belief. Our link up with Matchroom on the Fight Pass platform is indeed beneficial to us but obviously our own individual TV deal is the long term aim.  Still, every day more and more fighters are coming through our doors. We want to give good management to these boxers and for them to have their careers guided properly, TV or no. There’s a saying that its not the best fighters who get to the top, it’s the best managed fighters who get to the top.  We don’t charge these guys management fees either until it gets to a certain amount because we are looking at a playing a long term game . Its all about investing for the future at this point and taking our ethics up to a higher level.

You have a small and loyal team around you, including Olivia and your son Josh. Does that present any challenges, working so closely with your children!?

I actually find it very rewarding and not in the least bit challenging. With regards to Josh, he may only be 19 but he has the knowledge of somebody who has been in the business for thirty years. His analysis and knowledge far exceeds his years and he is a paramount part of this organisation. I value his opinion more than my own. He has actually just received his seconds license and is also looking to make his own in-ring professional debut later this year! That will be an event in itself, as he’s already the youngest promoter in the country, but when he makes his boxing debut, he will be the youngest person in history to do both: promoter AND fighter. It’s going to be some year for him.

Kevin Campion? What’s his role within the firm?

Kevin is a very good friend of ours and he is now our head of boxing. He actually works very closely with Josh. Between them they do international and UK match-making, both deal with boxer liason. Kevin is also a pro boxing coach, he helps our boxers in the corner, in a similar role to (the late) Dean Powell did with Frank Warren. He provides an additional supporting role to fighters, training, assistance and nutrition. We do it all in-house.

Your stable is growing everyday and between all those fighters there is a real depth of age and experience. Who are some of the guys to look out for in the future?

I wouldn’t want to forget anyone, but yes there are many guys at many levels. Of the novices, the ones who have fought, I’m excited by (super bantam) Josh Kennedy (2-0). Jose Lopes also at cruiserweight. Those two can definitely enjoy a bright future. At British level of course, we have guys like Larry Ekundayo (9-0), who just won a British eliminator at 147lbs but he’s out there now. Perhaps one name is Ashley Sexton (15-2). He has the potential, if he gets his head down, to be the star of the lot.

Everybody will remember Ashley for his famous KO of Usman Ahmed that was viewed hundreds of thousands of times on YouTube. He has been inactive for a long time. What has been the problem?

Ashley has had a difficult couple of years. He had problems outside the ring, family issues and the like. He was unhappy with his management and became so disillusioned with the sport that he didn’t really want to box again. He didn’t feel that he had good people around him. Since he’s come to us, he’s got the bit back between his teeth and we are going to help him rebuild his career. And this is something not exclusive to Ashley. We believe we should do whatever is best for a particular boxer at that particular time. We don’t look at our fighters as money making machines, too many people do that already.  When this is all over, I want all the guys I looked after to be able to say that I did my best for them and couldn’t have done any more. That’s important to me.

I can’t leave out Luqmaan Prince Patel and that interview he did with iFL’s Kugan Cassius following his professional debut. It created a storm online and you subsequently released him from his contract with Goodwin Promotions. Was it the external pressures you received that led you to release him, or was there another reason?

You are the first person to actually ask me WHY we got rid of him, Olly. Firstly, lets just say we don’t buckle to external pressure. That wasn’t the reason he was let go. The media blamed it solely on the interview and it wasn’t that either. Obviously that wasn’t good and didn’t help him, but we had a meeting with him and his trainer a week after the fight and there was a difference of opinion between us. The conversation wasn’t to our liking, lets just say that, so the team; Kevin, Josh, Olivia and I sat down and made the decision together. He was let go because his attitude didn’t fit in with our company. What people must remember however is a boxer employs us, we don’t employ the boxer. We are the employee, so let’s say we sacked ourselves! If you didn’t like your job, you’d quit. That’s what happened with Patel, yet wish him no malice and every bit of luck for the future.

Finally Steve, you’re five years in. Where do you see Goodwin Promotions in the next five years, in 2020?

I see us continuing to grow and develop the stable. By that stage I’d hope to be looking after 100-150 fighters on the books and have our own television deal. First though we’ve got the next show coming up on May 16th at York Hall. We’ve got four Southern Area titles on that one and another three or four titles too I believe so it’s going to be another massive show. Exciting times ahead!

Interview by Olly Campbell. I’m now on Twitter @undilutedpoison  All my features and articles/interviews can be found there.