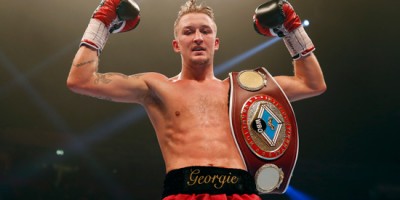 London’s George Jupp (9st 8lbs) was on the up last December after registering an upset win over then-undefeated Mitchell Smith (W10 for the WBO Inter-Continental Super featherweight title) and he bounced into an interim WBO World super featherweight title fight against Miguel Berchelt in March only to suffer a sixth-round reverse over in Mexico.

The 25-year-old was widely expected to ease his way back into contention by beating Jordan Ellison tonight yet his 5-7 (1) Durham-based opponent had the poise and guile of a Brookside-era Jennifer Ellison and the dogged aggression of Chris “DCI Burnside” Ellision throughout their eight-round contest.

The 20-year-old looked a step ahead throughout a close, bitty fight that had moments of interest yet failed to ignite. His cleaner boxing was not rewarded, though, a 78-76 card handing Jupp (now 14-3, 4 KOs) a win that was met with scattered jeers mixed with small applause. It was close enough to go either way, but a few will want to phone The Bill to complain about what they perceived to be a robbery. Ellison moves to 5-8 (1 early).