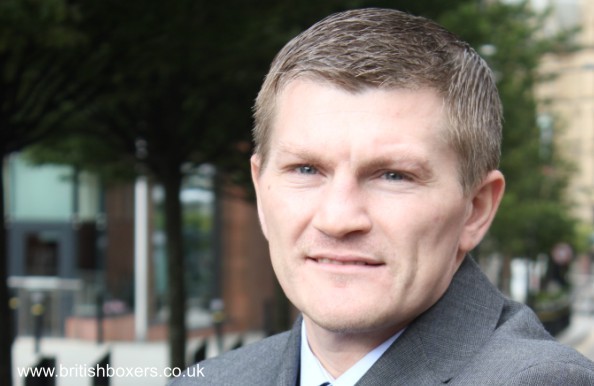 Hatton to join Fury and Chisora at ‘Face Off’

British boxing great Ricky Hatton will make a special guest appearance this Saturday (10th May) at the ‘Face Off’ between heavyweight rivals Dereck Chisora and Tyson Fury at The Printworks in Manchester.

The Hitman will be on the stage at 1pm with BoxNation presenter Steve Bunce as he looks ahead to the big Chisora-Fury showdown that takes place on Saturday 26th July at the Phones 4 U Arena.

Then at 2pm, Buncey will host the face-off between Chisora and Fury as he puts the crucial question to both fighters in what is expected to be the best heavyweight tear up in recent years.

Four-time and two-weight World Champion Hatton, one of Britain’s best ever loved sportsmen, is looking forward to the rumble at the Phones 4 U Arena that he made his fortress in his heyday, but first he’s excited with their head-to-head this Saturday.

Hatton said, “Like the rest of Britain I can’t wait for Fury and Chisora to get it on on July 26th.  Nothing gets the public going like a good all-British heavyweight fight and these two are certainly going to give the fans a real fight,”

“Nobody knows the Phones 4 U Arena like I do and I had countless great fight nights there and I think that these two are going to produce something special on the night.  So much is on the line for both of them, Chisora’s European title, the Vacant British title and a potential world title fight against Wladimir Klitschko for the winner.  Both men have bags of pride and passion and neither will want to come out second best which is why it’s going to be a cracker,”

“I’m looking forward to seeing Chisora and Fury this Saturday at The Printworks and of course Big Daddy Bunce who’s the only TV presenter in Britain who’s the size of these two and can keep them in order!”

The event is open to the public and is free-of-charge to attend.

Chisora and Fury will meet with the fans and sign autographs and pose for pictures after the event.