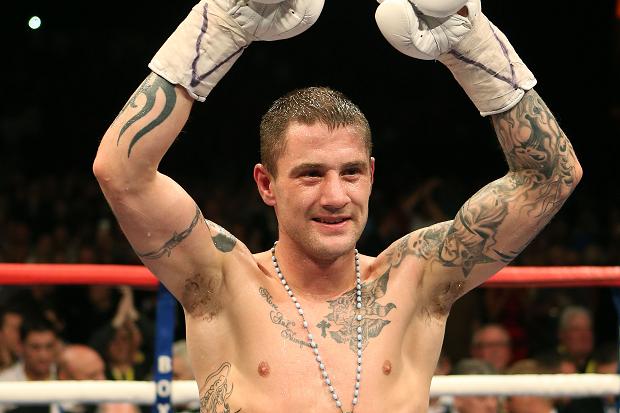 “Burns looks a bit ragged, he’s hurt too. Ricky Burns is in trouble here, he’s on the ropes! Is Burns there for the taking?!” asked an animated Adam Smith towards the end of a lively 11th round of Burns’s WBO light-welterweight defence against Kiryl Relikh on Friday night.

“The bell can’t come quick enough again for Ricky Burns, Kiryl Relikh has been astonishing in this round,” he added. Smith was right; he had been astonishing. The Manchester-based Belarusian had given Burns a torrid time in the first three rounds of their Friday night headliner in Glasgow and, having succumbed somewhat to the titlist’s experience in the middle rounds, was applying considerable pressure once again in the closing stages. “Wonderful again from Relikh; combinations are getting through Burns’ guard,” observed Smith at the start of the 12th, as jabs and right hands tested the Scotsman’s defence.

“I have it a draw,” concluded fellow commentator Paul Smith at the final bell, who couldn’t disguise the concern in his voice. Indeed, the dialogue was hesitant to commend Burns too quickly, who had been given a stern examination by a man who had never been beyond the eighth round and who was competing in only his third 12 rounder. The judges scores allayed everyone’s collective fears: scores of 116-112 twice and a too-wide 118-110 in favour of the hometown favourite were enough to re-ignite the celebratory mood, Burns’ difficulties instantly forgotten.

The dialogue changed too. Talks of Las Vegas, unification fights and a long awaited matchup with Adrien Broner were the main focus of the post-fight interviews, with promoter Eddie Hearn revealing that negotiations look positive for a December clash with the American. Burns, grinning despite a perforated eardrum, insists that he has what it takes to beat him, thanks to his ring experience which, he believes, was the deciding factor between him and his opponent that evening.

A notoriously slow starter, Burns conceded the opening two rounds, with much of the initiative coming at the hands of Relikh, who landed good body shots, and often. The Scot worked his way back into the contest in the third, and by the fifth he was dictating the pace, controlling the distance well with a stiff jab.

Overhand rights appeared to hurt the Belarusian but, just when it looked like Burns might have been on his way to his fourth consecutive stoppage, a left hook shook him badly in the 10th, and Relikh pounced. He had Burns constantly on the back foot from that point on, taking the last three sessions but not the fight itself, which I gave to Burns by a margin of 115-113.

At 33, Burns still remains one of my favourite British fighters. He’s a lovely guy and a great ambassador for the sport, but he should go away from Friday’s victory knowing that he has one or two things to work on if he wants to take on the division’s big names again. His work is wonderfully enthusiastic but it can be a little mechanical at times, his snap that was noticeably absent in his performances against Terence Crawford, Dejan Zlaticanin, and now Relikh. An iron chin and gritty determination will be enough to get him past certain fighters yet he will likely need more than that against any of the division’s top 10.

As a consequence, Broner will likely be encouraged to take on the Brit. He is brash, arrogant and a big believer in his own hype, but possesses considerable ability which makes him a dangerous operator when he actually uses it. Not only will he see a match against Burns as winnable, but as an opportunity to win back the title he lost on the scales against Ashley Theophane, who he went on to stop in the 9th round of their contest back in April.

Without doubt, Ricky deserves big fights. He has clocked up some good wins on domestic soil: Kevin Mitchell, Michael Katsidis and Roman Martinez have all been duly beaten. But the Broners, the Postols, and the Molinas of the division present different, much harder problems to solve, and I do wonder if Burns has the tools to do that. Hopefully, Ricky won’t leave Friday night trusting the scorecards, because the Vegas nights are apparently there if he wants them and, should he get them, he’ll need the skills that weren’t on display against Kiryl Relikh last week.