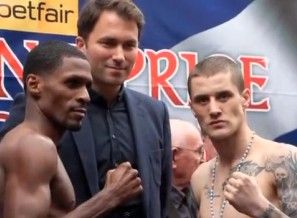 WBO lightweight champion Ricky Burns and his title challenger Jose Gonzalez weighed-in this afternoon for tomorow nights fight. Both boxers tipped the scales at exactly 9st 8lbs 1/2oz (134.5lbs) ahead of their big fight at the Emirates Arena in Glasgow on Saturday night.

Unbeaten Puerto Rican Gonzalez is the mandatory challenger for Burns’ belt, which will be the Coatsbridge mans third defence of the title.

On the undercard; John Simpson meets Choi Tseveenpurev for the WBC International title in a the chief support fight, Simpson came in at 9st 3lbs and ‘The Mongolian Warrior’ Choi scaled 9st 1lbs 8oz.