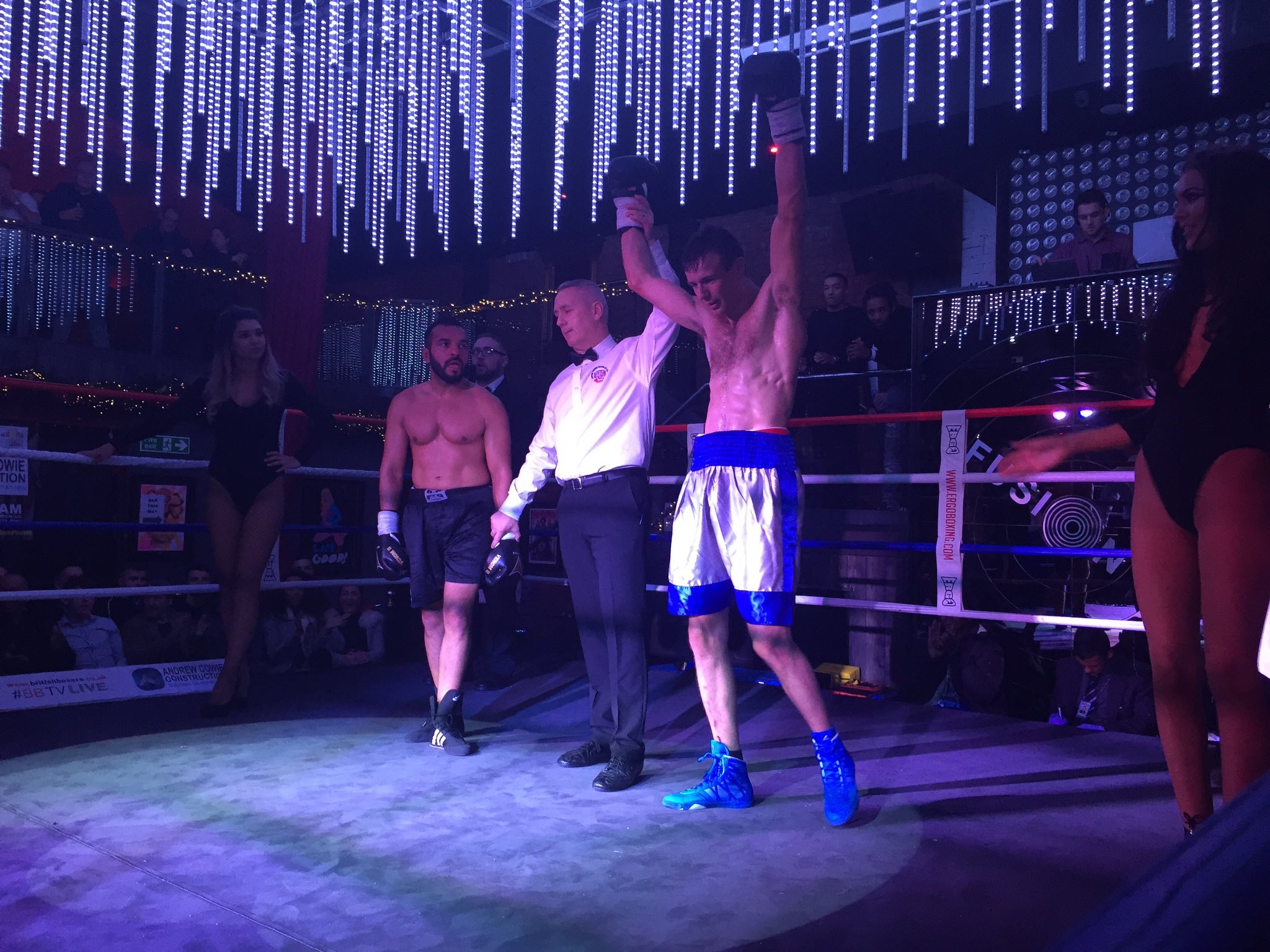 On Saturday night in Liverpool at the Fusion Nightclub, Black Flash Promotions presented an evening of pro boxing. The first time at this location for professional boxing and it turned out to be a very competitive night of pugilism and a great atmosphere in a venue a bit different to your normal boxing hall or centre.

First up on the bill was Liverpool’s Steve Floyd who was making his debut against experienced Ibrar Ryaz. Floyd boxed well to take a comfortable points win 40-37 and get his promising career under way.

In a real shocker well thought of prospect Sean Ben Mulligan was stopped in the opening round of his welterweight contest against Surrey’s Jumanne Camero. Both unbeaten prospects, someones ‘0’ had to go and it was Camero who came out of the blocks fast and caught Mulligan early as they both traded from the first bell.

Camera caught Mulligan Flush with a big right hand and a left hook that buckled the Manchurian’s legs. Seeing that his man was hurt, Camero jumped on Mulligan and landed another two flush right hands and Mulligan fell to the canvas. He managed to bravely get to his feet but was on wobbly legs. Referee Mark Lyson took a long look into Mulligan’s eyes and gave him the benefit of the doubt, but he looked venerable and Camero wasted no time and jumped on his opponent. Another flush shot and Mulligan’s legs again gave way and he fell to the canvas again, this time the official didn’t count and waved the fight off.

It was a good win for Camero, for Mulligan it was a setback to his promising career but he can come back stronger. Mulligan didn’t look himself going into the fight and he seemed to get caught cold and didn’t recover.

In Liverpool’s Marcel Braithwaite, British boxing have a very special talent in the super-flyweight division and on his debut, he shown glimpses of just why he is rated so highly. Taking on the tricky Sheffield spoiler Anwar Alfadli over four rounds, Braithwaite moved and boxed like a fighter who has had twenty fights as appose to a youngster making his pro bow.

This slick, switch hitting prospect has skills in abundance and as he progresses and gains experience he can go all the way. If Marcel Braithwaite wants it, there is no doubt this boy could become a star of British boxing and a certified future champion. Watch out for this one folks!

In the main event of the evening Manchester’s Mark Heffron continued his charge up the rankings with another early finish when he blasted out tough Nicaraguan import Michel Mora in the third round to take his impressive unbeaten record to 13 wins, 11 of those wins coming by KO, 8 of them have been in the first round alone.

Heffron, 25, is an immense prospect who the rest of the division are starting to look over their shoulder at. This man means business overtime he gets in the ring and his nickname ‘Kid Dynamite’ suites him to a tee, such is the intensity and power he punches with.

In this fight with Mora, he did start reletavly slower than his usual all out attack and actually made goos use of his jab and looked to be trying to box and get some rounds under his belt, but it wasn’t long before Heffron began to land with his heavy fists and Mora was starting to feel the power. Credit to the away boxer who stayed up for three rounds when many would have curled over. But as the fight wore on it looked only a matter of time before heffron was declared the victor.