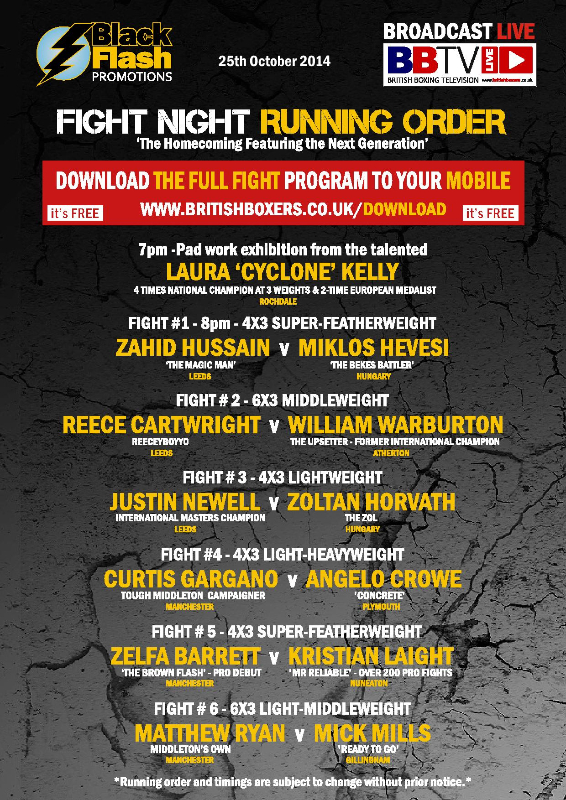 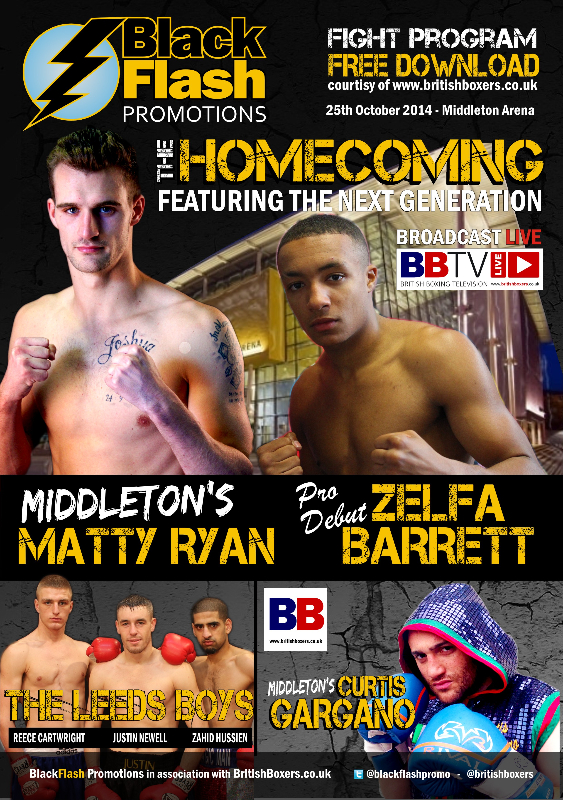 Manchester’s Pat Barrett doesn’t like being called a ‘promoter’, preferring instead to cast himself in the role of a trainer who dabbles in the dark art of boxing promoting in order to get dates for his charges.  However, he now knows a thing or two about the headaches and heartaches suffered by promoters when the shows they set out on paper start to fray at the edges and fall apart before you get to lay out the ring canvas.  Barrett’s bill at the Middleton Arena on Saturday night was hit by injuries to headline acts Matty Hall and Ben Mulligan, which left the former fighter with a few fires to fight.

Barrett, though, pledged that the show would go on for the sake of his fighters.  Leeds-based boxing manager Rick Manners has helped out by heading across Snake Pass with some of his fighters in tow.  Manners’s involvement allowed Barrett to shore up the bill, adding his Yorkshire connection to the hometown boys.  The Lanchester-Yorkshire union could also prove to be a fruitful partnership going forward as both men pledged their support for each other at the final press conference for Saturday’s show.

“These kids are the lifesavers of the show, frankly, because these lads have come on to help the show,” said Barrett, referring to the addition of Justin Newell (7-0 and the Masters Bronze light-welterweight titlist), Zahid Hussein (1-0) and Reece Cartwright, four wins out of four with no KOs.

“To me, this is the start of something great,” he added.  “This is a futuristic thing.  Rick’s got my respect and his lads will have a place on my shows.  I’m glad that Zelfa [Barrett, his nephew] can make his debut on a stage like this, Matty Ryan [5-1] gets to fight at home as well—that’s what I wanted for them.”

Barrett also pledged to get former Commonwealth light-middleweight title-holder Hall and Mulligan back in action early in 2015.  He said: “We’ve got [Sean] Ben Mulligan over there, he got hurt in sparring, so he can’t fight his debut fight—it was very upsetting.  Ben sold over five thousand pounds of tickets, but he’ll fight in February on our next show.  Matty is another big ticket seller in his hometown of Middleton.  To bring him back this weekend would have been a great thing, but I didn’t want to risk it.”

Young “King” Fury was also pencilled in for a slot, however the death of Hughie Fury, Tyson’s uncle, forced him to pull out of the show.  Barrett knows the Furys well; he helped Brian Hughes MBE train Tyson during the heavyweight’s brief stint at the Moston and Collyhurst Boys’ Club.  The “Black Flash” was quick to send out a message of support.

“I’d also like to send my condolences to Hughie Fury, who sadly passed away, and the entire Fury family,” said Barrett, bringing his part of the press conference to a close before handing the microphone over to Manners, who used to work with former British Super featherweight champion Carl Johanneson.

“We’re very happy to be part of this event with Pat Barrett,” he said.  “It is good to see Pat Barrett promoting.  He’s done it all—a British and European [light-welterweight] champion who fought for a world title [L UD 12 in a WBO title fight at welterweight against Manning Galloway].  He’s trying to bring his kids on, teaching his ethos to his guys.  I don’t train fighters myself, but work with Joe Pennington [of Northside ABA].  It’s strange; we’ve got lads from Yorkshire training in gyms in Manchester, where you get some proper gym wars.

“It’s all about the boxers, all about the sport.  I’m glad Pat’s bringing this to the Manchester and Yorkshire people.  It is hard to run shows—everything’s so expensive—so I heard Pat was having a few hiccups, got the lads together and we’ve all chipped in to help him.  It was a straightforward, no-brainer decision and I’m glad we’re here to help.  This is a lovely collaboration between Lancashire and Yorkshire.  Pat fights against the odds to break into the industry as a promoter/manager/trainer solely for the benefit of his fighters.”

Although Barrett does not have a TV deal in place, the show will be streamed live by British Boxers TV (www.Britishboxers.co.uk).  The service is free of charge, starts at 7.30pm and the show doubles up as BBTV’s launch night.

“I’d like to thank BBTV for putting this together, it’s very exciting,” added Manners.  Barrett then handed the baton over to Peter Caines of BBTV.

“We’ve been lucky to have this opportunity to work with Pat,” said Caines.  “It’s our first time and Pat’s, so we want to try our best and give it a go.  We want to do it right from the start.  BBTV will be live from 7.30 on the 25th of October.  It is free as well, so Tweet it, Facebook it and get the name out there.”

Zelfa “Brown Flash” Barrett the super-featherweight nephew of Pat Barrett, and trained by Pat at The Collyhurst and Moston and Collyhurst Boxing Club on the outskirts of Manchester, says he “can’t wait” for his pro debut.

“I’m excited, I can’t wait. It’s always been my dream to be a pro boxer,” Zelfa told www.britishboxers.co.uk. “The training methods [as a pro compared to being an amateur] are pretty much the same. That’s the way Pat trains us. I’m ready for anything and for anyone in my pro debut. I seriously feel I can go all the way. I live the life, I’ve got a great trainer, I’m talented and have the skills. [Reaching] British level is standard, really – I want to be world champion. Pat’s experience has rubbed off on me, I will follow in his footsteps. I can do everything in the ring, not wanting to sound big-headed! I just have belief in myself.”

Topping the card will be local Middleton light-middleweight Matthew “Matty” Ryan. Currently 5-1 as a pro, Ryan will be looking to impress in front of his hometown fans.

“We’ve come down from Leeds to showcase our skills on the night and to help Pat out,” added Justin Newell, who revealed that he had recently come close to securing a showdown with Hull’s Olympic hero Luke Campbell MBE, who is 8-0 (6) and fights Daniel Eduardo Brizuela in Hull on Saturday night.

“His name pops up all the time, we got offered the fight before at short-notice and ridiculous weight and weren’t ready,” added Hewell.  “I’m ready now, we want that fight and spoke to [Matchroom’s matchmaker Neil Bowers], who said he’ll put it to [promoter] Eddie Hearn, so let’s see what they come back with.  I’ll train over Christmas for a New Year date, if they’re ready, and come to his hometown of Hull.  Let’s get it on.”

*Running order and fight times are subject to change* 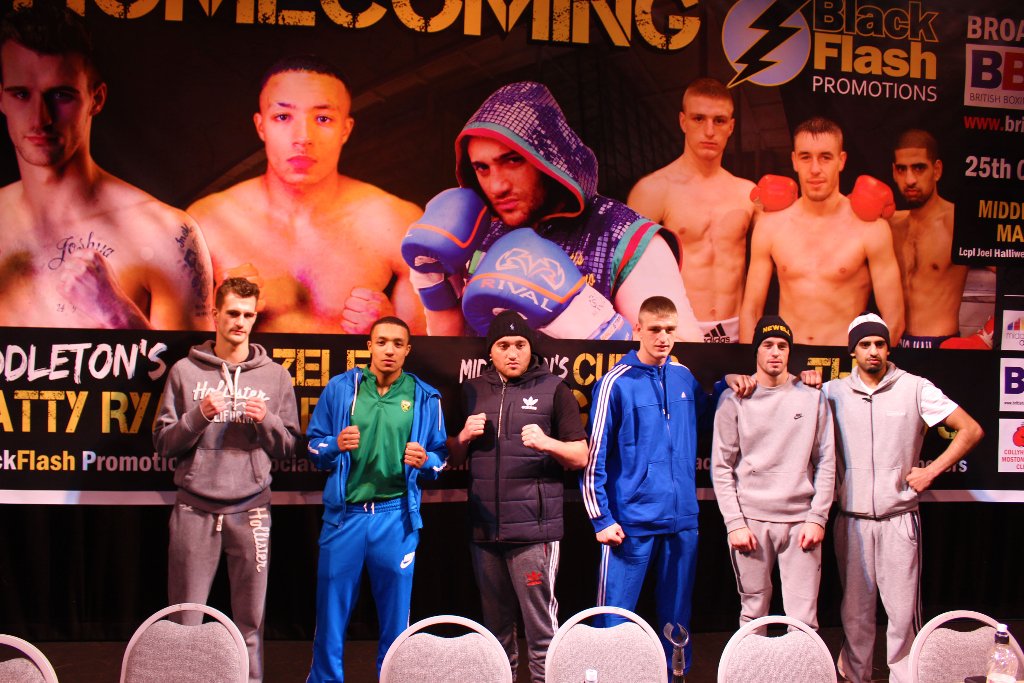