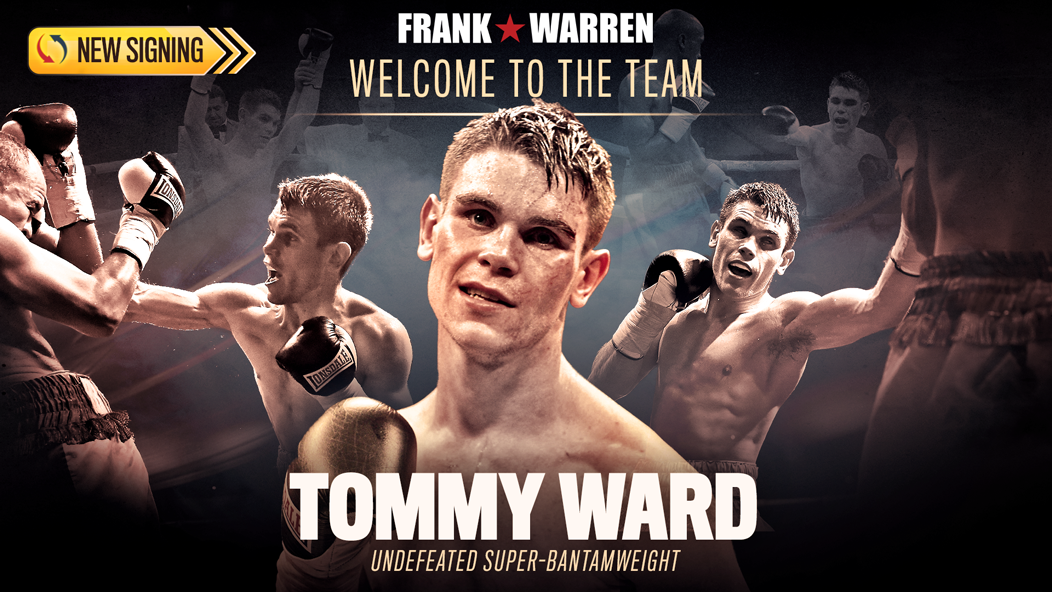 Ward, trained by Neil Fannon in Hartlepool and managed by David Garside, is aiming to bring big time boxing back to the North East. The County Durham slickster joins Warren’s growing stable of fighters that features identical Guisborough twins Josh and Kalam Leather.

The exciting duo have attracted a lot of attention since teaming up with Warren and now Ward is confident he can take his career onto the next level under the guidance of the boxing supremo. 22-year-old Ward is described by many fight fans in the North East as British boxing’s best kept secret but is now looking to propel his name into the limelight.

“I’m over the moon to be signing with Frank Warren,” said Ward. “In my eyes he is one of the best promoters in the world. He always gets his lads the fights they want and the fights they need. I’m really excited to be working with him and featuring on some big fight nights. Hopefully I can push on under his guidance and bring massive boxing to the North East for everybody.

“I’m a skilful and unique boxer. I like to keep to my boxing but I can mix it up and fight when I have to. I’m a smart fighter and I like to outbox people and show my skills. Anyone out there who wants to watch me will be in for a nice little treat.

“My early career has been managed by David Garside and Neil Fannon and they’ve been getting me out often which is great. They’ve put me in with some decent opponents, everyone I’ve fought hasn’t been a walkover and I’ve had some tough fights and learnt my job properly.”

The British Boxing Board of Control recently instructed Ward’s British title showdown with Liverpudlian Jazza Dickens to be staged by the end of February 2017. Ward knows he will have his work cut out against warrior Dickens who has lost just twice, to Sheffield ace Kid Galahad and Cuban pound-for-pound star Guillermo Rigondeaux, in 24 fights.

Martin Ward, Tommy’s older brother, went to war with Dickens in a challenge for the Lonsdale Belt last November but narrowly missed out in a split decision loss. Tommy is determined to avenge his brother’s loss and is predicting another barn burner of a fight.

“I got myself into the mandatory position for the British title by beating Robbie Turley in my eliminator. I’ve beat everyone who they’ve put in front of me to get to that spot. I know Jazza and his trainers and they’re all nice lads and I get along with them but this is business. He owns the British belt and I want it.

Trainer Neil Fannon said: “Tommy is top class. Anybody who enjoys the art of self-defence and likes to see a real nice boxer will love watching Tommy. If you look at his record he’s only stopped two opponents but he could have stopped a lot more.

“He’s just serving his time and doing everything right. We’ve gone under the radar a bit because of his age but he’s had the right fights at the right times. He does everything we ask of him and he’s never had a drink of alcohol in his life. He’s a pleasure to train and he can really push onto the next level under the guidance of Frank.

“Tommy deserves to get some television exposure. Me and David Garside know how good Tommy is, as do the fans up here. But it will be brilliant for the rest of the country to see him box. It’s great Frank has recognised his talent and wants to promote him.”

Frank Warren said: “Tommy is gifted with bags of natural boxing ability and I’m thrilled to be adding him to our growing stable of talent. He lives and breathes boxing and has the right attitude to take him far in the sport. He has a tough test next against Jazza and I’m sure it will be an exciting contest for the fans.”