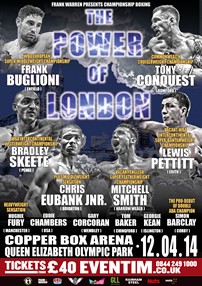 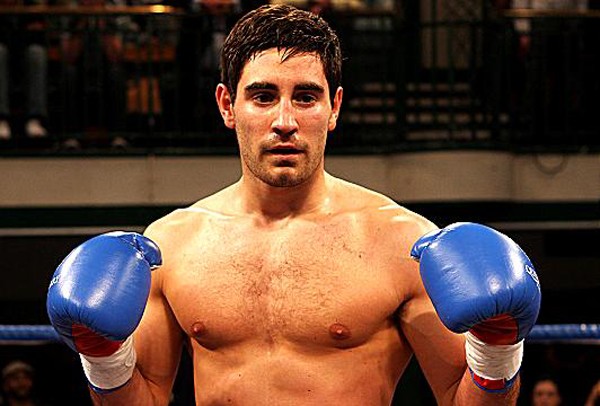 Frank Buglioni is on the Big Copper Box Bill

Featuring alongside Buglioni in title action will be Tony Conquest, Bradley Skeete, Lewis Pettitt and Mitchell Smith on the show titled “The Power Of London”, live and exclusive on BoxNation (Sky Ch. 437/HD 490 and Virgin Ch. 546).

Khomitsky has extended top Brits Martin Murray (twice) and the now retired Ryan Rhodes the distance and also ended the career of Jamie Moore when the popular Manchester fighter didn’t come out for the seventh round.

Buglioni is looking to put on another top performance for his fans on the night.

He said, “He’s the best I’ve faced so far, he’s mixed with the bigger names and has bags of experience so it will be a good gage to see where I am in my career.  He took big punchers in Murray and Rhodes the distance and stopped Moore so he’s no mug. I’ll be looking to make a real statement with a controlled, calculated and destructive performance.  I’m not relying on punch power even though I’ve stopped my last three in a row, my fans love to see me involved in a good tear up, but I’m moving up in leagues now so I’ve got to use my brain, if the opportunity does come to take him out I won’t need a second chance.”

Romford warrior Tony Conquest returns to action after his twelve-round war against Daniel Ammann in his last fight to capture the Commonwealth Cruiserweight title.  Conquest will make the first defence of the belt against Liverpool’s Carl Dilks.

Undefeated Bradley Skeete, from Penge, puts his WBA Intercontinental Welterweight title on the line against Italian Guiseppe Loriga.  Skeete won the title last time out against Christopher Sebire, outpointing him in the first twelve rounder of his career.

Mitchell Smith, one of the exciting young stars of British boxing, returns to the ring in quick time after his second round knockout of Mark Evans last month as he looks to capture another title on his rise to stardom.  Undefeated Smith, from Harrow Weald, holds the Southern Area Super-Featherweight title, but now steps up for the Vacant English title and meets another undefeated fighter in Hartlepool’s Peter Cope.

Erith’s exciting Lewis Pettitt will challenge for the Vacant WBA Intercontinental Super-Bantamweight title on the show with his challenger to be announced shortly.

Undefeated Chris Eubank Jnr., son of the British great, faces the biggest test of his career when he takes on former European Middleweight Champion Kerry Hope in only his 14th fight.

Heavyweight sensation Hughie Fury will look to take his outstanding record to 14-0 inside a year of turning professional when he takes on Sunderland’s Danny Hughes over six-rounds.