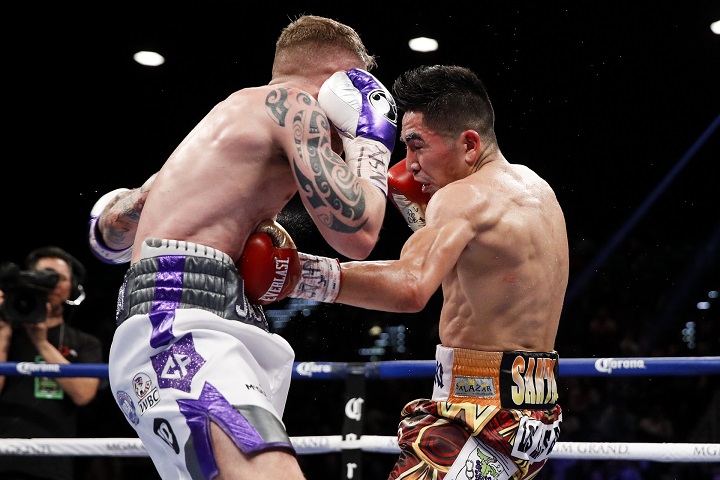 Boxing has had many trilogy match-ups down the years when two combatants just cannot be separated in a fistic brace. Some of the world’s best boxers have forever been immortalised in the sport with a rival, forever revered through association. Ring warriors Carl Frampton and Leo Santa Cruz have both entered that realm after another fantastic clash on Saturday night between the two modern day warriors.

The first encounter in New York last July was a classic featherweight brawl, which Frampton was declared the winner. That set up this weekends return at the MGM Grand in Las Vegas, equally an intriguing a battle as the first, which this time it was Santa Cruz who prevailed in another tight affair. A third meeting seems inevitable.

Frampton has already declared he would like a trilogy showdown to be in his home city of Belfast. And Santa Cruz, who regained the title he lost in their first fight, admitted he would be happy to take on Frampton on his home soil next time.

It was an agonising night for ‘The Jackal’ in the fact the fight was again so close, but the change in tactics from Santa Cruz was clever and instead of standing and trading with the tough Northern Irish man, he boxed clever at a range which proved more effective than the game plan in the first fight.

Even so it was a very close fight. One judge Burt Clements had it a draw, 114-114 but the other two judges Dave Moretti and Glen Feldman scored it for the Mexican, 115-113 to leave Frampton dethroned of his WBA featherweight crown and heartbroken, but in typical fashion still full of respect and admiration for his opponent.

“The best man won on the night. I’m gutted, but we’ll have to do it again.” said Frampton afterwards.

“He was very clever, he used his reach and he deserved it. I hope now he’ll come to Belfast for the third fight.

“I feel I let the fans down. Leo told me what he was going to do and he did it, he used his range more.”

Asked about a rubber match and if he thinks Santa Cruz will want to face him  again, Frampton said: “I hope so, I hope he is a man of his word and we can do it in Belfast this time.” when speaking to broadcasters he told Sky Sports.

“I have come to the States twice. We could do it four, five, six times. I hope we do it again.

“I am deeply disappointed but let’s have a trilogy and have our names linked together forever and hopefully I can win 2-1.”