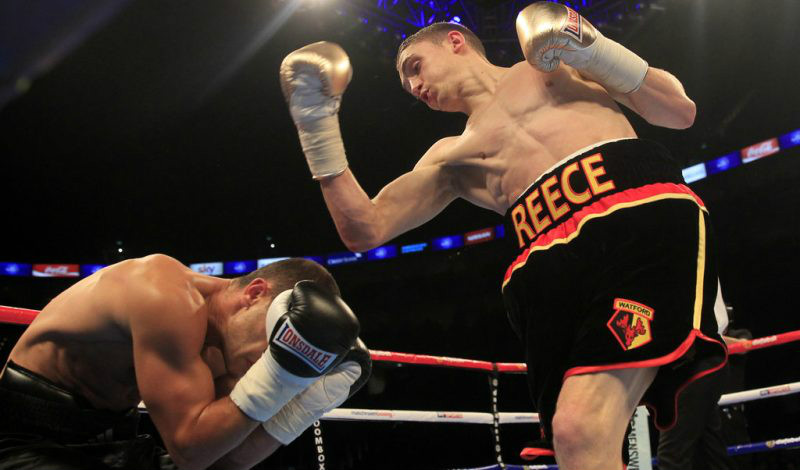 On Friday, the 17th March, Matchroom will be hosting the first in a series of “NXT GEN” events at the famous York Hall in Bethnal Green, to showcase up and coming boxers in Britain. First opened in 1929 by the Duke of York, the venue is part of British Boxing history and many fighters aspire to have a bout on their record at this prestigious theatre.

We asked Eddie Hearn, English Boxing promoter and Group Manager of Matchroom Sport, about his motivation in setting up the “NXT GEN” series at York Hall. He told us that it’s “Giving our young fighters a further chance to develop in championship fights under the bright lights with worldwide exposure”.

Reece Bellotti (8-0,7KOs) is set to headline Friday night with his fight against Dai Davies (14-24, 2KOs) for the British Featherweight title. Davies, Merthyr Tydfil, is the more experienced of the two, having accumulated 98 amateur fights and 40 professional, however being nine years his opponent’s senior, will he be able to keep up with the “Bomber” from Watford?

Bellotti made his debut into professional boxing a mere two years ago, at York Hall, where he fought Joe Beeden and knocked him out with a right to the body in the first round. He has since been back to the historic venue a further three times to uphold his spotless record and with another win next Friday, this could be the chance he needs to further his career.

Davies, on the other hand, is confident that he has been successful in his recent fights, having won five out of his last six. He says he has been waiting for this chance for years now and with a shot at the eliminator, he is well aware that time is not on his side to make his mark in the world of boxing. He says, “I ain’t any young spring chicken, so I’ve got to take this chance with everything I’ve got…..I’m gonna do the biz”.

Alan Higgins (12-0, 6KOs) will be defending his BBBofC Southern Area Super Middleweight title against Craig Richards (7-0, 3KO’s). Craig “Spider” Richards spoke with Sky Sports towards the end of February about the fight this Friday, saying that “York Hall’s always a big atmosphere, no matter where you are on the card”. He says he has been training hard and although he acknowledges that Higgins has more experience, he said “I feel I’ll come out on top”.

Cruiserweight Isaac Chamberlain (6-0, 1KO) will be returning to the Hall for the fourth time to fight in his second ten round bout. His opponent is yet to be announced, but with an unbeaten record and youth on his side, it is sure to be an interesting fight.

Paul Hyland Jnr (14-0, 5KOs) is facing Peter Cope (14-3, 1KO) for eight rounds of a Lightweight contest. The pair are closely matched, in the amount of fights they’ve had, however Hyland Jnr has fought against more experienced boxers and has a better knockout percentage.

Felix Cash (4-0, 3KOs) is also returning to York Hall after winning his third bout there against Christian Hoskin Gomez. 23-year-old Cash will face Jay Byrne (4-0, 1KO) for a Middleweight contest.

Jake Ball (7-1, 6KOs) is set to get in the ring this Friday and is looking forward to returning to the venue after winning his second and seventh bouts there. He told us today “I love boxing at York Hall, the atmosphere when you walk out is unreal”. Jake “The Blade” was selected for Team GB back in 2012 and has dedicated himself to the sport ever since. He took a devastating and unpredicted knockout in his last fight at Wembley, from JJ McDonagh and lost his chance to get the WBA International Light Heavyweight title. Ball looked favourite to win that fight and it must have been a setback to lose to 31-year-old McDonagh. Ball told us “I have learnt a lot from that fight and improved a lot, main thing is to always be switched on and never take no opponent for granted”.

Danny Dignum (1-0, 1KO) goes up against Iain Jackson (5-34, 2KOs) for four rounds of a Super Middleweight contest. With Dignum being 14 years his opponent’s junior he is in with a real chance of winning this bout.

Miles Gordon-Derby (1-0, 0KOs) is due to face Jake Bonallie (1-0,0 KOs) in a Cruiserweight contest which will see both fighters in the earliest stage of their professional careers.

With a thrilling card in an iconic British institution, this Friday looks to be a night that cannot be missed. No matter what the outcome of each individual bout, the series of “NXT GEN” fight nights is going to promote and showcase our future stars of boxing and what a fantastic and memorable venue in which to do it.