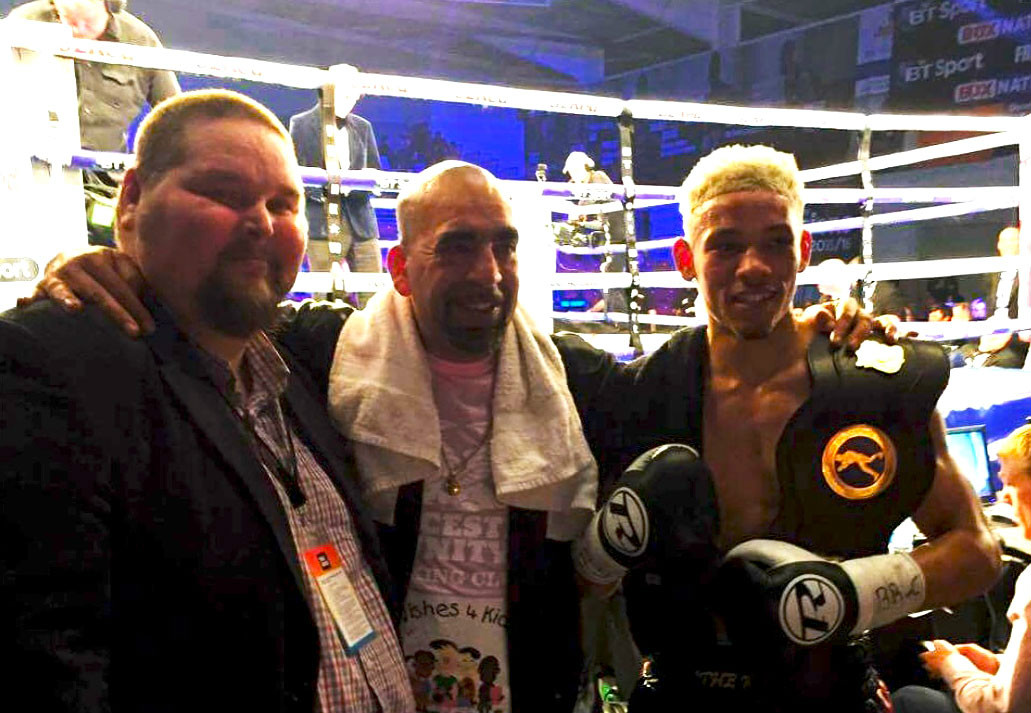 Lyon Woodstock put on an explosive performance when he stopped Paul Holt in the 3rd round of a ten rounder, becoming the new Midlands Area Champion in front of his local crowd at the Leicester Arena on Saturday night.

Shown live on Boxnation and BT Sports, Woodstock brought to the Leicester Arena an army of followers and made sure their money was well spent from the first minute to the last.

It was Holt that started the fight the fastest. He took control of the centre of the ring and forced Woodstock to take shelter on the ropes and in the corners. The onslaught from Holt, the former Midlands Area Champion before being stripped of the title, looked to discourage Woodstock at first but then a right hand landed cleanly for Lyon which gave him a much needed confidence boost.

Holt continued his pressure tactic and did enough to take the 1st round. He continued the pressure going into the second stanza but Woodstock looked a lot more sharper coming out for the round and started to make Holt miss with a solid defence and head movement.

Then half way through the second Woodstock turned the bout on it’s head. Woodstock sweetly counters another Holt flurry with a left straight, then followed it up with a quick, sharp left hook which rocked Holt back to the ropes. With Holt retreating to the ropes, Woodstock turned up the aggression and started to work Holt to the head and body.

With his confidence sky high after a very positive final minute of the second round, Woodstock got straight onto the front foot at the beginning of the third stanza.

Light on his feet and boxing at a nice rhythm, Woodstock started to land at will onto

Holt, especially with the left hand as a few of his sharp, accurate power punches began to rock the head back of Holt. To his credit, Holt showed his heart and granite chin as he soaked up everything that was thrown at him.

But it didn’t last for long; A right hook from Woodstock caught Holt on the ear which sent him stumbling into the corner, Woodstock smelt blood and went for the finish. The sheer aggression on display gave Holt no option but to cover up. As soon as Holt tried to throw back, a heavy left hand made Holt slouch back onto the ropes. Woodstock followed up with a heavy right hand giving the referee a perfect reason to halt the fight before Holt took more punishment.

The arena erupted as Woodstock raises an arm to his army of fans as he claims his maiden professional title and became the Midlands Area Champion in the super featherweight division.

Raza Hamza had to dig in deep against his Nicaraguan opponent Rafael Castillo but managed to put on an entertaining performance and win 59-55 on the referee’s scorecard.

By the first round Raza put in, it looked like it was going to be an early night for the Birmingham lad when a fast, aggressive start was too hot to handle for Castillo as he fell to the canvas due to the pressure from Hamza.

Hamza continued to pressurize Castillo but surprisingly heard the bell for the end of the first.

The second stanza began as Castillo opted to attempt to turn the fight into a scrap as he began to rough up Raza. A head clash halfway through the round was the factor to a vastly swelling right eye for Hamza which put a dent onto his momentum as Castillo began to get back into the fight.

Hamza was visibly in a tough fight but was also showing the cleaner work whilst Castillo continued to roughen up Hamza; going in with his head continuously which amazingly wasn’t flagged by the ref at any moment during the fight.

Knowing it was going to be a tough task stopping the Nicaraguan, Hamza opted to box his way to victory on the back foot, continuing to show the cleaner work.

Both fighters visibly tiring, the sixth and final round was fought at a slow pace which favoured the home fighter in Raza Hamza as he jabbed his way down the home straight and to victory.

The referee’s scorecard read 59-55 to Raza Hamza as he moves onto 8-0-1 and continues his solid, undefeated start to the professional ranks. A tough, entertaining fight for Hamza but another test passed as he continues to progress nicely.

Fellow Leicester man CJ Challenger had to wait until past midnight before he could enter the ring for the third time as a professional, but he proved that it was worth the wait as he stopped his opponent in Danny Little with a fantastic knockout in the first round of their four rounder.

CJ looked sharp from the off as he mixed his punches with some nice one-two combinations. Then halfway through the round, another one-two by CJ managed to rip through the tight guard of Little, a right hook to the side of the face and temple doing the damage.

Little was in no state to continue the fight as the ref wisely waved the fight off, giving CJ the early victory. It was CJ’s third professional win and maiden stoppage as he continues to look like a future contender.