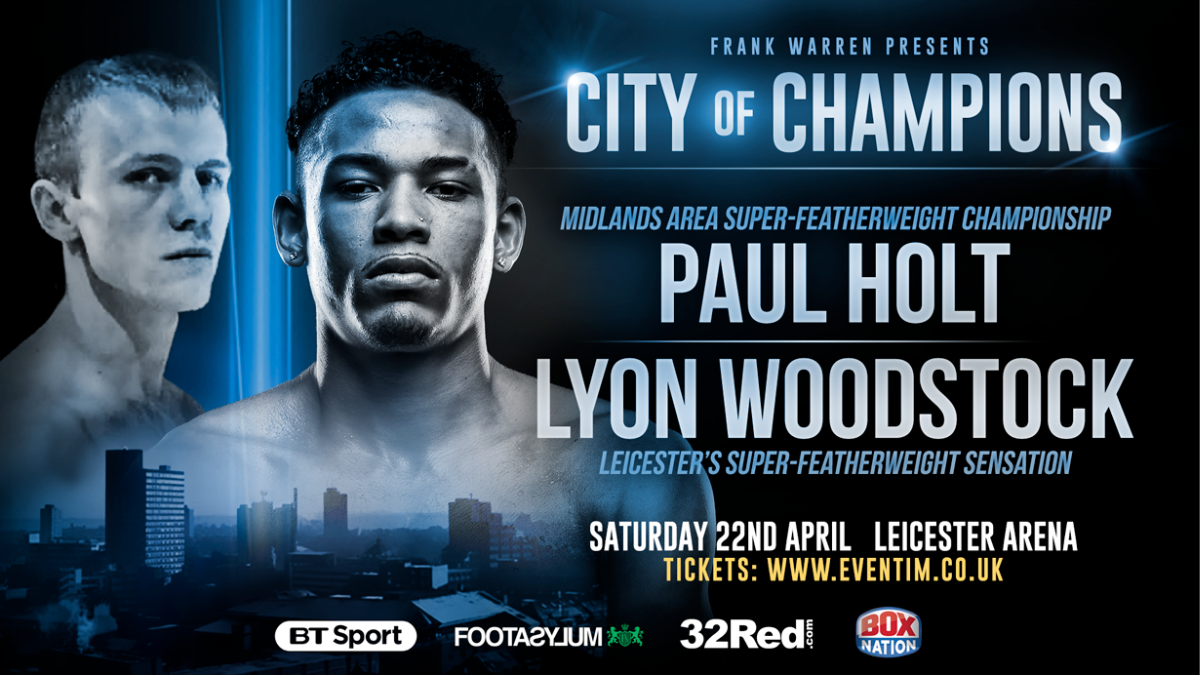 LYON WOODSTOCK: “I’VE ALWAYS BEEN A SHOWMAN. I’LL THRIVE OFF BEING CENTRE STAGE!”

The nucleur punching super-lightweight begins his quest when he trades ammo with useful Brummie southpaw Paul Holt in a scheduled 10 rounder for the Midland Area crown at Leicester Arena on Saturday week.

‘When (Leicester) City won the Prem, it was proper mad, a little Rocky story of its own,’ says the personable Ajmal ‘Hudge’ Butt coached starlet who has won eight straight.

‘This is also quite a big rugby city. Tigers are still one of the best teams and The Riders, our basketball team, are also doing exceptionally well.

‘There’s always been a big fighting culture in this city. Scrapping was certainly the norm around Beaumont Leys, the district where I grew up. Back in the day, if you couldn’t fight there, you were a prime target (to be bullied).

‘But the last time we had big time boxing in the city was when Chris Pyatt won and defended his (WBO) world middleweight title here about 24 years ago. It’s quicker to list the titles Chris didn’t win than those he did! Before that, you had Tony Sibson, a proper people’s champion who’s come to a few of my fights. They’re an inspiration to me today but, growing up, I had no local heroes to look up to.

‘‘Hudge’ and me always had this pact that we’d bring Big Time boxing back to the city. About 18 months back we met with the guy who runs the Arena where The Riders play and told them that we intended to use this as our ‘home ground’ for when I’m involved in title fights. We encouraged him to sort out links with Frank Warren. Now it’s here.

‘The venue is less than a 15 minute run from my house and I can’t wait. My job isn’t to sell tickets, it’s to beat people up but I’ve already shifted over 300 and lots don’t buy until the last week so I should have at least 400 plus you’ve the support of all the other Leicester fighters to count on. It’s going to be proper lively!’

But the Hackney born 23 year old insists that he’ll maintain a cool head in what is easily the toughest test and biggest occasion of his promising 22 month pro career.

‘People deal with emotions and situations differently,’ says ‘The King’, who is managed by Jason McClory and promoted by Frank Warren.

‘But because of my life experiences on Leicester’s roughest streets, I rarely get nervous. Fighting in the street there were no scales, no rules, no gloves, no referee, no doctor….In my head, the boxing ring is safe!

‘Besides, I’ve always been a showman, a performer. From the age of about 11, I used to perform in  King Arthur and Moby Dick at the Haymarket Theatre so I’m used to a crowd. I’ll really thrive off being centre stage.

‘I’ve been given a great space to show what I can do. This will really put me on the map with the boxing public.’

A crippling body puncher, the 5ft 9in Leicester lacer is touted for major titles. Nevertheless, he stresses that his main motivation lies closer to home.

‘Primarily, I deliver to the Beaumont Leys Massive!’ insists Woodstock.

‘The only reason I’m succeeding myself is due to the help of others; my coach, my manager, my promoter, my sponsors. Otherwise I’d just be another kid from this estate, getting into trouble.

‘So it’s only fit that I try to give back. I’m not self-centred. If I can help change a few lives, that would be amazing. That’s my inspiration. That’s all I want.’

Remaining tickets priced £30 are available from www.ticketmaster.co.uk from 4.00pm today.