Hobson confident Sheedy will lift the Commonwealth title on April 8 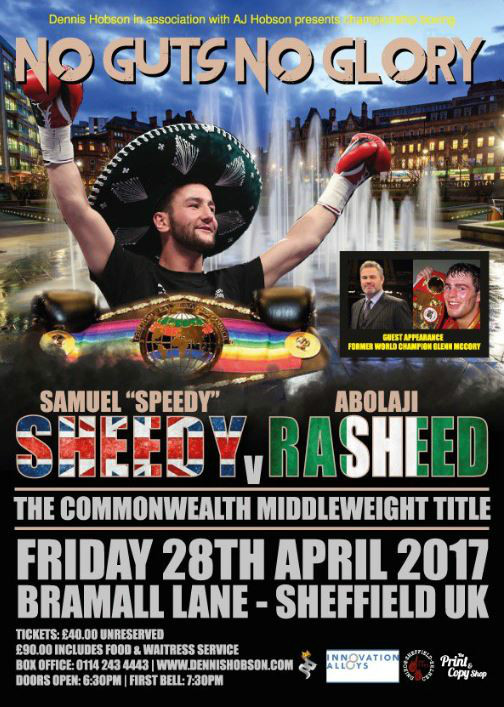 HOBSON: ‘SHEEDY CAN STOP ABOLAJI AND MOVE ONTO WORLD LEVEL’

Dennis Hobson is predicting a stoppage win for Sam Sheedy when he faces Abolaji Rasheed, 8-2-1 (4), for the vacant Commonwealth middleweight title on April 28.

In November last year, ‘Speedy’ Sheedy lost a British title attempt to Tommy Langford on a controversial split-decision verdict.  With Langford now about to challenge for the interim WBO world title later this month, Hobson says Sheedy has proved he belongs in world class company.

“I think Sam’s experience will be key.  He’s been beaten by a supposed world champion in the making in Tommy Langford via a split decision, and that experience is going to stand him in good stead.  Manouvering fighters is a skill and if you get the win that’s great, but it’s not always crucial.  Sam’s now got that championship experience and knows how to strategise over a 12-round contest now.

“Sam’s ready to go now and take on world class fighters, he needs to get the win on the 28th against Rasheed, and then we’ll move onto the world scene.  I think Sam can stop Rasheed because he’s got the bit between his teeth and wants to make a statement.  Hopefully he does, but the Nigerian is not going to fall over and he’ll be thinking about his future and career too.  It’s not a given but if I was a betting man, I’d think Sam could get the stoppage.”