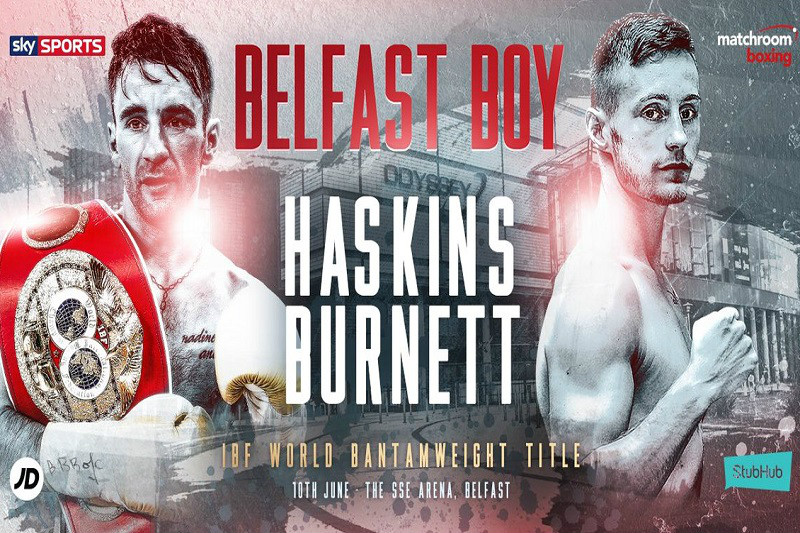 Ryan Burnett and Lee Haskins will provide the highlight of a packed few weeks for the Irish boxing scene. Burnett has the Matchroom promotional powerhouse behind him and Eddie Hearn has sent out a statement that he’s looking to build in Belfast by securing home advantage for the challenger to Haskins’ IBF bantamweight title on June 10.

With Adam Smith providing eloquent top table backup, Hearn assembled an eclectic mix of local names to provide undercard heft when presenting his vision at the iconic Europa Hotel recently. Hearn received a more convivial reception than the last time he held court at a Belfast press conference. Roundly booed and painted as the ultimate pantomime villain during the hostile Quigg-Frampton build up, Eddie is now viewed more as the man to bring big time boxing back to the city than as Quigg’s well-polished mouthpiece.

Setting up in Belfast’s SSE Arena (formerly the Odyssey) is a fairly bold move, especially if they have ideas about filling it. Ryan Burnett is a talented boxer, with time on his side, an interesting back story and some stellar amateur achievements but hardcore boxing circles aside, he’s a relative unknown. Eddie says that he realises this, but now is the time to start building his starlet into a genuine attraction. Therefore, he couldn’t conceivably take the world title fight anywhere else.

“Whether it does three, four, five six, seven or eight [thousand heads] doesn’t bother me,” said Hearn. “People here support their own and whatever numbers come out, we’ll see. Why wouldn’t you support him? Frampton’s done brilliantly but he is in the back end of his career. He might only have one more, maybe two, fights back in Belfast.”

Realistically, reading between the lines of his comments, Eddie expects something within the realms of 3-5,000 punters showing up on fight night. The SSE is not that easy to fill, as Mick Hennessy found out when Tyson Fury based himself in the Northern Irish capital a few years ago.

“I’m a realist, I know the market and I know where Ryan Burnett is in terms of profile,” continued Hearn. “He lives in England, he hasn’t been here for long. But then again this is world championship boxing, one of your own winning a world title. I know I might not be everyone’s cup of tea in Belfast but the Matchroom brand is strong and it’s a Sky show.”

Adam Booth has been keeping Burnett on a leash so far but Eddie says that if he is unable to replicate his gym form under the bright lights of a main event then he won’t beat an experienced campaigner like Haskins.

“If you win and it’s poor then the next one’s difficult, so you need to entertain.”

Before Lee Haskins was nailed down, a fight with then-WBO bantamweight holder Marlon Tapales was close to being made, while Kazakhstan’s WBA Super champion Zhanat Zhakiyanov was also in the frame for Burnett. Hearn eventually persuaded Haskins to cross the water and the Bristolian’s manager Jamie Sanigar certainly fancies the fight, emphasising the “boy” part of Hearn’s Belfast Boy show tagline as being the difference.

“The pressure is definitely on Ryan to force the fight – massive pressure,” admitted Eddie. “One, he has to win, two, he has to look good and I look at things differently from the corner team. I look at this as a product so all I’m thinking about is if Ryan Burnett can look brilliant, win the world title, with a decent atmosphere in the Odyssey [sic] then we can stroll back in and actually build something here.

“There’s another show in Belfast, a week after ours, so it’s going to be tough for everybody but you’ve got to do it.”

Speaking of that other show, Frank Warren is the man making a welcome return, one week after Matchroom’s offering, on June 17. During his media discussions Hearn agreed that it will be a case of pick and choose for many fight fans who won’t be able to attend both.

While the Sky TV wagons pull up in the SSE, Warren’s Queensberry Promotions will run again in the cultured surroundings of the Waterfront Hall. I graduated in the Waterfront Hall and it was packed to the rafters on a balmy Saturday afternoon. Unfortunately the same cannot be said for the most recent boxing event that took place there in March of this year, when Jamie Conlan defeated Yader Cardoza after another stirring display of guts and warrior spirit. The crowd was sparse and muted for the majority of the show, which was a crying shame as the card was solid, with some good local names on, as has been the standard of BoxNation’s domestic events of late. Hopefully this will be rectified on June 17 and the vocal boxing element will resurface.

Conlan plans to ease through a keep-busy eight-rounder before leaving his promotional team to thrash out a deal for a crack at one of the super-flyweight titles. If, as expected, the WBO strap is left vacant after Naoya Inoue’s May 21 defence against Ricardo Rodriguez then Conlan was originally hoping to find himself thrown in against Hong Kong battler Rex Tso at some point later in the year. Tso, however, looks set to battle Kohei Kono, in a bout set for October. That timeline would leave Conlan in limbo and chasing an alternative but Tso has been linked with Kono before and the fight failed to materialise, so watch this space.

Regardless of the path he eventually takes, Jamie is looking to steer clear of a Waterfront war as he preserves himself for the big one.

“There’s enough talent on this bill to bring excitement this time,” he told David Kelly of the Belfast Telegraph. “I can hopefully have a good win without much drama. One thing I won’t be allowing to happen is me in any way getting complacent. I’ve worked too hard and too long to let it all slip away now.”

He’s right about that.

Before all of this excitement north of the border, on May 27 Leonard Gunning dips back in to the world of promoting with Celtic Clash: Part 2. Teaming up with Tony Davitt this time and running in Dublin’s National Stadium, Gunning’s Boxing Ireland outfit has previous promotional and managerial credibility on the Irish circuit. Leonard’s featherweight hope Eric Donovan has joined the pro ranks with a hugely impressive amateur career behind him and has the quality and experience to push on quicker than many of the fledgling professionals he’ll be sharing the ring with on the night.

The first Celtic Clash took place in late 2013 at the Emerald Roadhouse (now the Devenish Complex) in Belfast as Leonard hooked up with promotional stalwart Mark Dunlop for an evening of thrills and spills. Sligo slugger Stephen Reynolds went to war with Warrenpoint boxer Declan Trainor for six intense rounds before Trainor was stopped by referee David Irving. Both men tasted the canvas in round five and Reynolds walked away with the vacant Celtic Nations cruiserweight title for his efforts. Neither men fought again.

Gunning and co-promoter Davitt will be hoping for a sprinkling of that magic on May 27. There are currently 17 fighters listed on the bill but a few names usually disappear as the date draws close. Either way, with Cuban heavyweight Mike Perez now also added to the roster, it promises to be a good night of action.