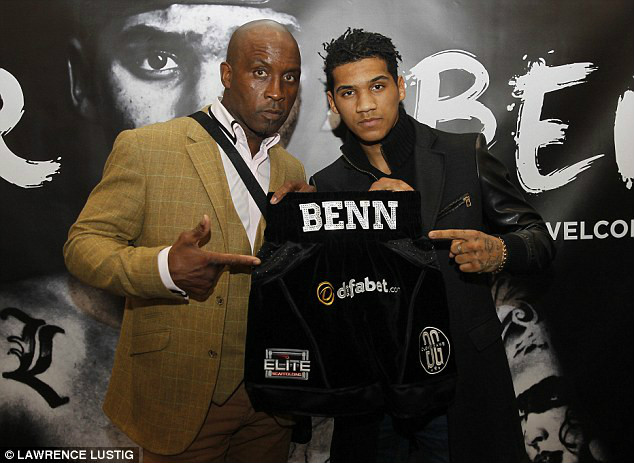 Conor Benn with his dad Nigel - pic by: Lawrence Lustig

Benn was just one stand out from a host of British talent on display at a sold out York Hall in the latest edition of Matchroom’s “NXTGEN” shows including the likes of Joshua Buatsi, Lawrence Okolie and Joe Cordina.

The “Destroyer” was at his destructive best but displayed a new level of maturity, as he continues his comeback following his six month absence from the ring, taking his time and picking his shots in the opening exchanges where Baker looked to unsettle the 20-year-old.

Birmingham’s Baker came into the bout also holding an untarnished professional record but was left frustrated in his attempts to turn the bout into a slug-fest. Benn showed off his arsenal of defensive skills, dipping under shots and outthinking his opponent in flashes that displayed more similarities between Conor and legendary father, Nigel.

As Baker began to tire, more gaps started to appear in the armour with Benn beginning to land more and more trademark combinations. In the final seconds of the first, a vicious right-hand sent Baker crashing backwards, with only the ropes keeping the brummy on his feet and the bell that followed from possibly being stopped inside just one round.

This was seemingly the beginning of the end, with the second round very much following suit. The courageous Baker continued to stand up to the onslaught from a dangerous Conor Benn who was growing in confidence landing more combinations and picking shots seemingly at will.

The situation began to look desperate for Baker, who was pulled up for a blatant head-butt in the clinch just half a minute into the second round, resulting in a one point deduction and a stern telling off from Referee Jeff Hinds.

This would have no impact on the final outcome, as Benn continued to display the ruthless aggression and punching power that has already made him a fan favourite amongst British boxing fans in such a short professional stint. A sharp left hand off the back of a clinch, rocked his opponent, before a quick right hook sent Baker on his way, with a few more landing for good measure.

The gutsy 27-year-old lifted himself off the canvas but the referee rightfully stopped him on his feet with just under a minute on the clock to prevent further punishment.

The victory now leaves Benn with a perfect 8-0 record since he burst onto the professional scene in April last year. The Essex-born fighter once again showed an ever developing skill set but more importantly showed signs of in ring maturity, picking his shots and sticking to a game plan from the first bell. It’s too early to be looking too far forward, but it certainly won’t be a surprise to see the name of Benn back on the Pay-Per-View undercards again very soon.