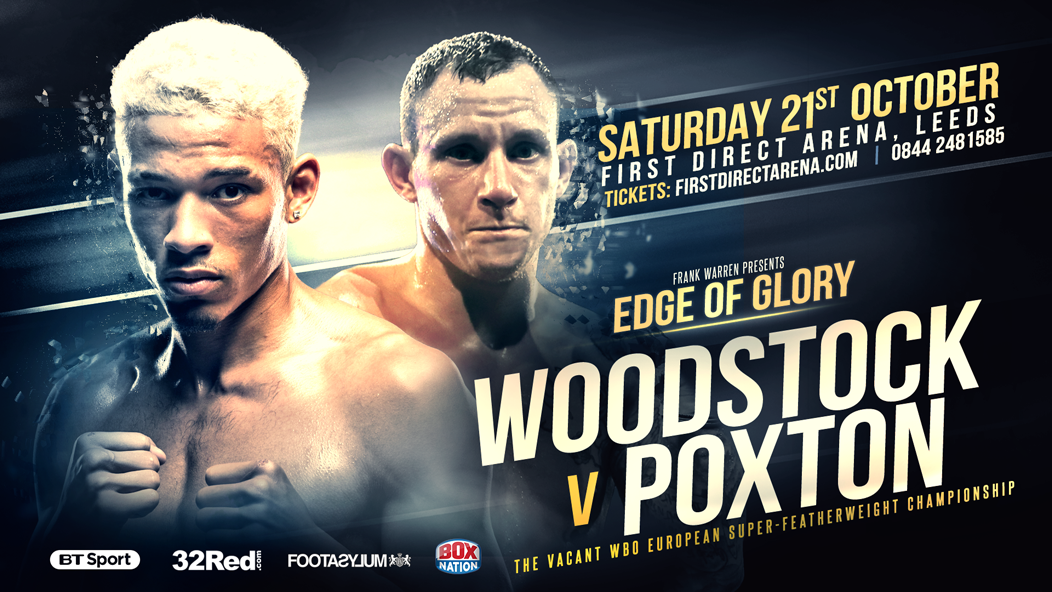 Lyon Woodstock and Craig Poxton will clash for the WBO European Super-Featherweight Championship at the First Direct Arena in Leeds on Saturday 21st October, live on BT Sport and BoxNation.

Last April, in an emotional homecoming at the Leicester Arena, Woodstock landed the Midland Area Super-Feather strap, after stopping defending champ Paul Holt in round three.

Poxton executed one of the upsets of the year last February when he chopped down Chingford’s previously unbeaten Boy Jones Jr in ten to snare the Southern Area Super-Feather strap at The York Hall.

A top 15 World ranking with the WBO awaits the winner of this highly-anticipated dust up.

“Poxton is my ‘coming of age’ fight, the fight I’ve been working towards since I first turned pro. Everything from here on in is extra,” said Woodstock. “If he comes to knock me out, he’ll come unstuck very quickly. I’m the type who’ll knock you cold when you’re attacking me. I can find that finishing shot in the eye of storm, end any fight at any moment.

“On the night, I’ll put my plan into play. Trust me, I could do what I want with Poxton. I’ve been through far too much in my life for my spirit to be broken by another man, if we go toe to toe. I’ll be leaving the ring with that belt around my waist.”

‘Lyon likes to get in your face and if he needs that to get stoked, good for him,” said Poxton. “But that won’t bother me.  I’m not one for mouthing off and won’t get side tracked by who said what. Boxing’s a man’s sport. You don’t need all the BS. Just enjoy the fight.

“I always train as if it’s the hardest fight I’ll ever have, against the best possible version of my opponent. I never take my foot off the gas. I’ve had eight weeks notice and a quality camp; lots of top sparring with the Walshes and Archie Sharp. I’m ready to go to work.”