Looking Back: The Prince’s American debut 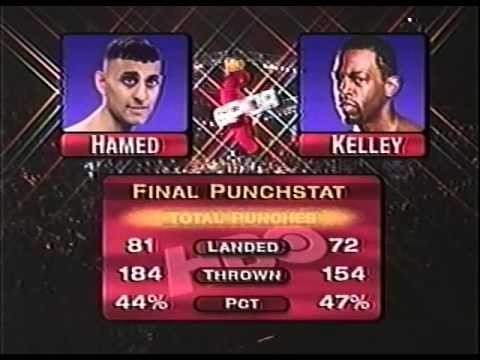 Hamed at the time was undefeated as a professional, sporting a 28–0 record and had become renowned for his knockout power, with all but two of his fights having been won by way of knockout.

Due to both his fighting style and flamboyant personality, Hamed had also quickly become one boxing’s most popular fighters and had become the highest-paid featherweight in the sport. Kelly had 47 wins on his record with just one defeat going into the contest. With lots of trash talk through the media ring road, the bout was going to have no love lost.

Hamed launched the fight strongly as Kelley struggled with Hamed’s unorthodox fighting style. Hamed had backed Kelley into one of the corners in the first round with a glowing display of ring generalship.

However, Kelley caught Hamed with a leaping right hook on Hameds amateurishly exposed chin as the Brit steps back. Naseem, unhurt physically (potentially with a damaged ego) gets up before the bell sounds.

Kelley began round 2 as the aggressor and scored a second knockdown over Hamed after landing a left hook that dazed an unbalanced Hamad. Hurt for the first time, Naseem got up and endured a swarming attack by Kelley who was rushing a further knockdown.

Kelley would continue to chase before Hamed countered with a CRUNCHING straight right hand, from switching intelligently to an orthodox stance from southpaw. This sent Kelly down hard. Naseem’s unusual side-on stance with the jab continued to befuddle the American. The torque generated from this stance combined with the unorthodox slipping and rolling made the remainder of the round very difficult for Kelly.

Kelly adapted in the third and Kelly was able to pivot to square against Hamed’s unusual stance rendering ineffective at times and permitting Kelly to strike with precision.

The fourth round saw Hamed land two left hooks that sent Kelley down harder than the first. These were administered when Kelly failed to clinch fully, and his head was completely unguarded. Kelley, when standing, countered an aggressive Hamed with a right hook, Hamed’s right glove again touched the canvas, officially giving Kelley his third knockdown of Hamed.

Kelley apoplectically drove Hamed back, but during this exchange, Hamed took a half step back with clever footwork to briefly get out of range before mechanically shooting a straight left with devastating consequences. PURE POWER

Naseem Hamed has to be one of THE all-time greatest punchers (86% KO ratio at bantam/featherweight) and one of the best movers.