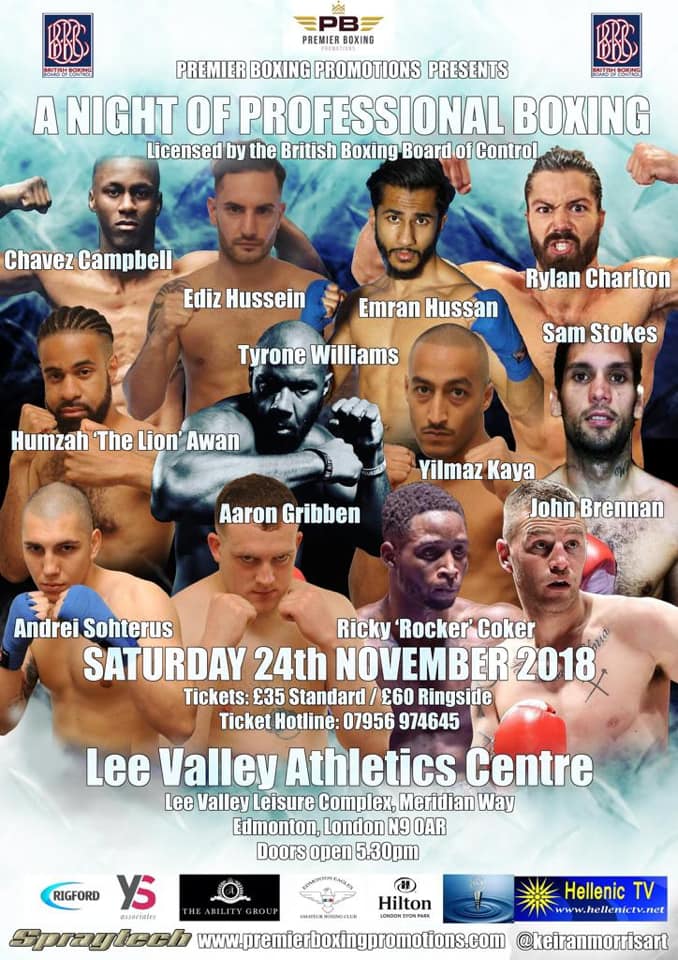 If passion is not your main motivation to be in boxing, then you’re in the wrong place. Whether you are trying to be a champion, a trainer, a writer or whatever, if the reward for you is not already in just doing what you do, then you might be disappointed. Of course everyone wants to make it to the top and see his efforts financially rewarded, and rightly so. But, if cash and fame are the only reasons why you’re in this and you don’t have the passion, it’s guaranteed you’ll lose.

“Never mind profits, not even winning is the ultimate goal: it’s about developing our fighters as good people and role models. If they win, then that’s fantastic but in the end of the day just taking part enables them to develop character, integrity, self esteem and show to young people that there are possibilities in life other than crime and violence, especially at this time when boxing is blooming in the UK.” Former Amateur coach/referee Costakis Evangelou explains the philosophy behind the new born Premier Boxing Promotions ahead of its first show Saturday November 24th at Lee Valley Athletics Centre.

BRITISHBOXERS: What is your boxing background and credentials prior to this new venture?

COSTAKIS EVANGELOU: I am originally from Cyprus but was brought up in England where I started boxing as a teenager. I did not have opportunities to pursue a career as a fighter and instead ended up coaching for Edmonton Eagles ABC. As a club, we work with the community to prevent anti-social behaviour in young people. I was a qualified Amateur coach and judge. Now I am also a licensed manager, trainer/ second, matchmaker and promoter.

BB: How did you decide to start your own promotional company? What was your main motivation?

CE: I had experience from managing my own sons from the Amateurs into the Pros. More and more people from the club asked me to assist them in doing the same transition and I wanted to be able to help. It is a natural progression from the work I have been doing with these kids since the beginning. I am a Church Minister, that’s how I make a living. This is not about money. As long as I can cover the costs and help my guys to progress in the process, even if they eventually get signed by someone else who can give them bigger opportunities, then my job is done.

BB: What are Premier Boxing’s short and long term objectives?

CE: In the immediate future to put on regular shows to develop the records of our boxers while also giving other small hall promoters a chance to showcase their fighters on them. At long term, we aim to have them winning British and European honours. If they show ability, commitment and sacrifice may be push them even further and have World level contenders if not champions.

BB: How many fighters do you have in your stable at the moment?

CE: We have 6 boxers signed exclusively to Premier Boxing, namely Cruiserweights Aaron Gribben and Tyron Williams, Middleweight Andrei Sotherus, Super Lightweight Ylmaz Kaya, Super Welterweight Humzah Awan and Light Heavyweight Ricky Coker (5-0). They will all be making their debut on our first show except for Coker, who campaigned at Super Middleweight and is going up in weight after 1 year of inactivity.

BB: What requirements must a fighter meet for you to sign him?

CE: The bottom line and my main requirement is that they must be committed about the sport. Hence, I have to know them first. I would not just sign the first person that comes through the door. Most of them train at the club anyway and wanted to turn pro. They are all top draw Amateurs and will not become opponents. Aaron is coming back specifically to join the paid ranks after taking a Master degree in Sport Science; Tyron was recommended to me by a friend and I had no hesitation in signing him after watching him spar and train; Romanian Sotherus is a former as kick boxer with 20 kos on his record; I’ve known both Kaya and Awan for a number of years and can vouch for their commitment; Ricky I managed before.

BB: Both your sons, Welterweight Chris (13-3, 2 kos) and Light Heavyweight Andreas (10-0-1, 2 kos), were highly touted prospects and featured on several Matchroom, Queensberry and Goodwin’s undercards. What is up with them and can we expect to see them returning on your shows?

CE: Sometime life takes you on different avenues. Christopher got into acting and other media but he is involved with Premier Boxing and will be at the event to help with organizational aspects. Andreas has only just applied to get his licence back and we expect him to be boxing at our next show, still as a Light Heavyweight.

BB: Lee Valley Athletic Centre is an unusual choice of location as opposed to more traditional small hall venues as York Hall or the Brentwood centre. Is there a specific reason behind it?

CE: We want to create a recognizable North London scene and crowd with its own venues, first of all. Also, it makes sense logistically as all fighters are local and it makes it easier for their families and friends to attend. We approached Lee Valley, that never had boxing before, and they proved very supportive.

BB: How many fights are on the bill and of what length?

CE: There will be 13 fights in total. 7 fights will feature boxers from other promoters, 2 of whom will be engaging in 6 rounders. All the other fights will be 4×3 and that includes Coker as he has been inactive and needs to be tested at a higher weight. As far as the opponents go, we tried to make winnable fights for our boxers but against people who come to win.

Boxing is the hardest and most challenging sport in the world, not just for what you have to do in the ring but also everything going on around it. We want fighters to know our Premier Boxing is there to help them fulfil their goals and vision.