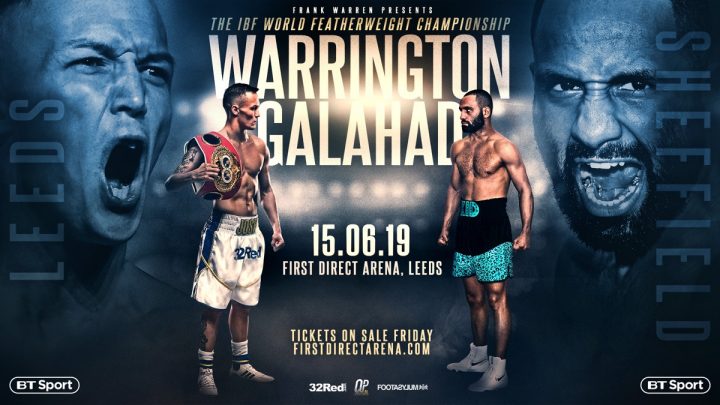 Amidst the bickering between the two sides at Wednesday’s final press conference at the Leeds City Museum, the messages from Josh Warrington and Kid Galahad were remarkably similar.

“This is my destiny,” the challenger to Warrington’s IBF featherweight world title, Galahad, boldly proclaimed at the start of his questioning at the top table.

Whether intentional or not, it’s a strikingly similar rhetoric to that of Warrington prior to his crowning fight against Lee Selby in May last year.

He spoke of it repeatedly in the build-up. The rival opponent in Selby was suited to him, the Elland Road venue offered the grandest stage and the timing couldn’t have been better.

While in regards to the venue, Galahad doesn’t have the same benefits as Warrington, but he still views this as the perfect time to become champion of the world.

Prince Naseem Hamed – an idol of Galahad who introduced him to future mentor, and father of current trainer Dominic, Brendan Ingle – held the title that Galahad challenges for back in 1997.

“The belt is coming back to Sheffield,” said Galahad.

To do so, he must overcome the arguable British pound-for-pound number one in Josh Warrington, in his home turf.

The Leeds fighter continues to improve with every fight, upsetting the odds with conclusive wins over Lee Selby and Carl Frampton to win then defend his world title.

On paper at least, Galahad poses a lesser threat, having not previously boxed at the level of Warrington’s last two victims.

But, as Anthony Joshua’s shock defeat by Andy Ruiz Jr proved, pre-fight predications can so often count for very little.

“We’ve put 20 years of work into this,” said Sean O’Hagan, father and trainer of Warrington. “We’ve had to fight for everything in our career and we’ll do it again on Saturday night. There’s been no complacency in this camp.”

“I’m still hungry, the hunger has not died one little bit,” agreed Warrington. “Just because my life has changed since winning the world title, it doesn’t mean I’m going to roll over and give my title away.”

Such talk of a potentially complacent Warrington has been fuelled by the champion’s publicly-stated desire to unify against the other belt holders over in America, in the immediate aftermath of December’s win over Frampton and ever since.

To overlook Galahad, and it’s highly doubtful that Warrington has, is a dangerous game. The Sheffield-based fighter has earned his place on merit for the shot.

A wide points win in an eliminator against Toka Kahn Clary has put him in this position on merit, following the captures of British, Commonwealth and European titles earlier in his career to boot.

Though, as Warrington rightly pointed out in the press conference, this is the first time that Galahad has stepped up to such a high level.

“I’ve been here many times before, where as this is Barry’s first time. We’ll see how he performs under the bright lights,” said Warrington.

Indeed, these lights are the brightest they’ve been for Galahad. No longer is on the undercard and no longer is he boxing at home in Sheffield. He’ll be walking out in front of Warrington’s lion’s den on Saturday, with an electric atmosphere and the toughest fight of his career waiting ahead of him.

So usually a cool, calm and collected boxer. How well he can deal with the occasion is a big unanswered question.

He’s got to deal with Warrington too, of course. Probably the in-form Briton right now, he’s coming off the back of two stellar performances and looks like he’s hit the peak years of his career at the right time.

The champion will close to the distance, make it tough and uncomfortable and look to break down Galahad on the inside, just as he did to Selby and Frampton.

From the esteemed Wincobank gym, Galahad is the archetypal pure boxer, who will look to keep Warrington at range and box him.

Both believe it’s their destiny to prevail in this much anticipated derby, a showdown between two staunch Yorkshire rivals. Only one will be right come Saturday night.