Joshua vs Ruiz II? “We are waiting for ‘Answers and Guarantees’ says Ruiz coach. 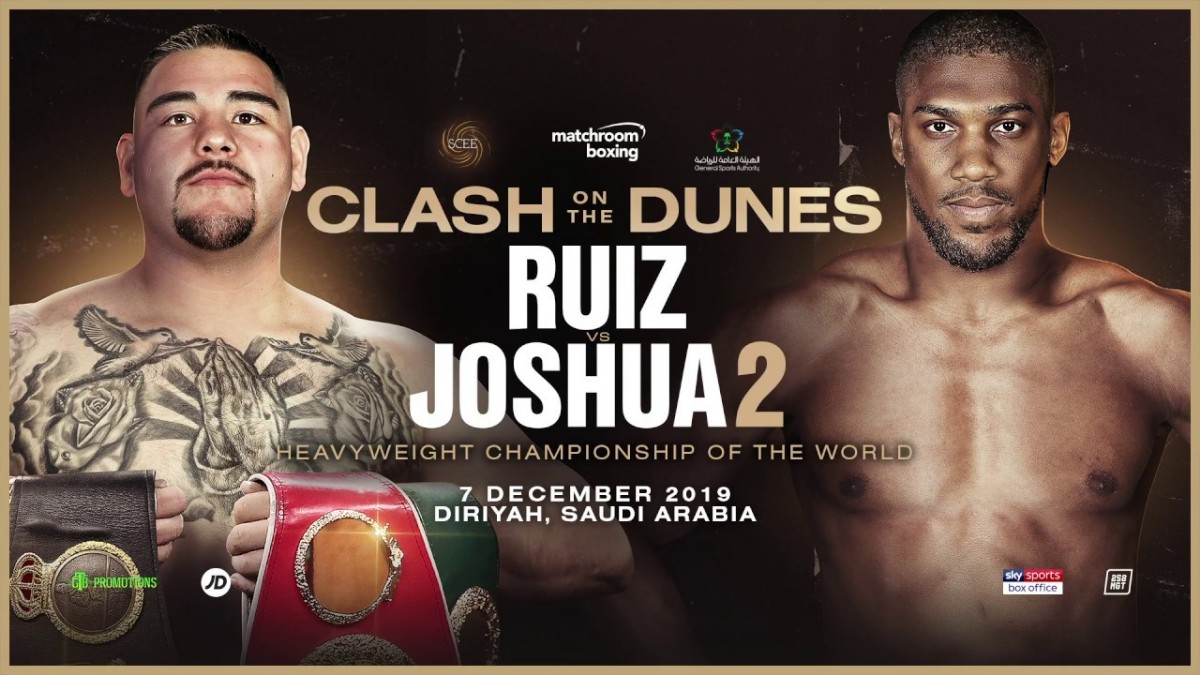 On April 19, 1775, a shot was fired in Concord, Massachusetts (United States). The shot, which marked the start of the Revolutionary War, was later referred to as the “Shot heard around the world.” It was certainly a shot heart by the British who were shocked the US colonists would turn on the British government.

On June 1, 2019, there was another shot heard around the world, the UK boxing world. The shot was delivered by Andy Ruiz Jr when he registered a shocking TKO over reigning IBF, WBA and WBO world heavyweight title holder Anthony Joshua. According to many boxing experts, this may have well been one of the biggest upsets in boxing history, certainly in UK boxing history. Bettors in UK sports books and casinos with live dealer games will long remember this upset as Ruiz Jr was listed at odds ranging from 15-1 all the way up to 25-1 in some betting locations.

Joshua vs Ruiz I – Highlights

With the possibility of some mega money fights in the future against the likes of fighters like Tyson Fury and Deontay Wilder, Joshua was very quick to invoke the rematch clause in the contract after the fight with Ruiz. While Ruiz might choose to try to avoid the rematch, he would likely face legal action, something that would end up with him having to face Joshua anyway or risk being stripped of his belts without a fight.

With that in mind, the Ruiz camp has agreed to go forth with the rematch. Preliminary dates were set for the two fighters to meet at either Cardiff’s Principality Stadium on December 14 or a return fight at Madison Square Garden on November 29. Ruiz, a US citizen who chooses to fight under the flag of Mexico, had expressed a preference to fight at a venue on the West Coast. Rumours circulated that a west coast city in the US, likely Los Angeles, had also made a late bid to stage the fight.

Then things got a whole lot more complicated when Joshua’s promoter Eddie Hearn announced that the fight was officially ON, named it ‘Clash on the Dunes’ and put everyone on standby at a press conference in London. “The rematch will be in Saudi Arabia on December 7th!” Hearn gleed with delight. “Oh no it won’t!” responded Ruiz, who incidentally wasn’t in attendance at the presser and neither was Joshua.

Heavyweight champion Ruiz is insisting that he’s not going to travel over to Saudi Arabia to defend his titles and is doing everything he can to get the venue changed. Without going into politics and whys and what for. The US State Department advises its citizens not to travel to Saudi Arabia for various reasons. This right here, is Ruiz’s get out clause, if he has to dig his feet in and refuse to fight there. This could get interesting!

It appears team Ruiz’s concerns about fighting in Saudi are not just because of his country’s political stance, but also from a boxing stand point, bringing into question, how a professional event is covered and overseen, considering the fact they don’t have a commision, adding also that he believes boxers are not drug tested in Saudi. It is believed a former British Boxing Board official was in charge of proceedings at a couple of recent boxing shows staged in the region but Robles wants answers!

In an interview yesterday with Behind The Gloves Andy Ruiz’s trainer Manny Robles, said their team are waiting for answers to their questions.” and guarantees!

“Simple questions like; there is no commision in Saudi Arabia, who will be in charge to oversee the fight? There is no VADA, no drug testing. What are the guarantees we have?” Questioned Robles.

Watch the full interview with Manny Robles below here…