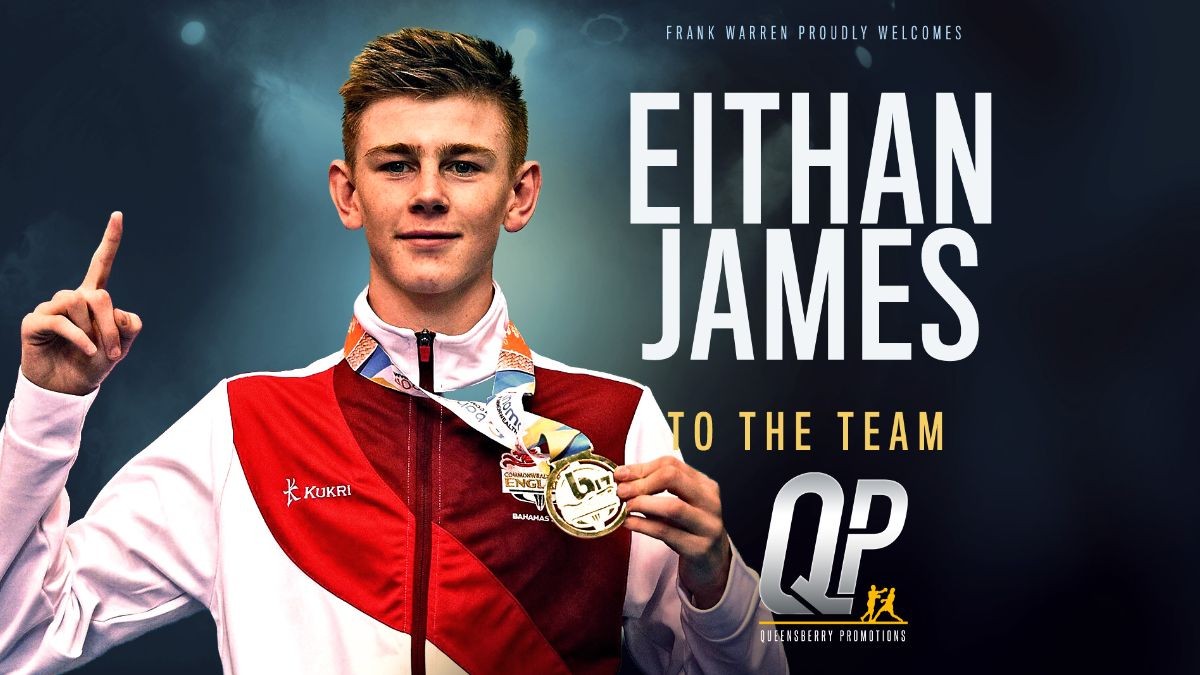 “I have no doubt I can go all the way with the team I have behind me.”

Northampton’s professional boxing scene marches on as 18 year-old multi decorated Amateur sensation Eithan James joins Frank Warren’s Queensberry Promotions stable. After winning five National titles, the Tri-Nations, the Haringey Box Cup, a gold medal at the Commonwealth Youth Games and a European silver one, the Super Lightweight from East Hunsbury felt he had run out of goals and was already considering the transition to the paid ranks but did not expect it to happen as quickly and naturally as it did. Nevertheless, he more than fancies his chances entering this new level of his chosen profession…

BB: How did you get into boxing in the first place?

EJ: I had anger issues as a child and used to get into fights all the time. One of my teachers used to run a boxing club in school and urged me to join it to keep myself on track, then he set me up at the King’s Heath gym when I was eight years old. It was something different that I had never done before and a few friends from my area were also doing it. I enjoyed it because of the social aspect but most importantly I was good at it. I had my first fight at 11 and stuck to it for good.

BB: Did the move to the Pros just happen out of the blue when you met your current trainer Alan Smith or was it already in the plans?

EJ: I was looking to turn pro in the next year or two but I was not expecting it to happen overnight like it did. I missed the next Olympics and 2024 is too far away. I already achieved a lot in the Amateurs and felt the need for new challenges. Meeting Alan made everything happen spontaneously. I just went down to his gym for a session and talked to him about my aspirations and within two months he found me a manager and a promotional contract with Frank Warren.

BB: Can you describe your style? Is it suitable to the professional game or will you need to implement changes?

EJ: I’m a scientific boxer. My natural attributes make me so. I am a good mover, also tall and rangy and with quick hands. My main weapon is a strong jab and I use it with precision. It’s a type of style that makes for a long career. I might not be the strongest in terms of power but I am confident that by applying my skills properly in the ring stoppages will come. There is not much that needs changing, it is more a matter of transferring and adapting to the Pro game what I already got. At the moment, I am working on fitness and doing a lot of sparring to get used to the length of the rounds. Style wise, I am trying to slow down a bit and make shots count rather than throwing volumes.

BB: What are your short and long term objectives as a Pro?

EJ: I am looking to stay undefeated in the immediate future and to win domestic and world titles on the long run. I have no doubt I can go all the way with the team I have behind.

BB: How do you feel about the tickets selling aspect of the game?

EJ: I am not feeling any pressure at the moment. I already have a good fan base that is willing to travel. For the same principle by which a knock out follows naturally if you do everything else right, I am confident that if I focus on my training and produce good performances ticket sales will not just follow but increase.

BB: What is your assessment of the current Super Lightweight domestic scene?

EJ: To be honest, I didn’t follow the UK scene much up to this point. I am focused on building my profile and I trust Frank Warren to steer me in the right direction. I give myself about two or three years to get to title level and it will probably be a completely different landscape then.

BB: Who do you recognize as the true champion in the division at world level?

EJ: It is a tough and very competitive division but I pick Taylor out of the pack.

BB: Northampton’s professional scene is very much on the map as of late thanks to Drew Brown, Chantelle Cameron and Kieron Conway. What is the reason for this sudden explosion?

EJ: It seems to have blown very quickly but these are the products of an Amateur scene that has existed for years. We all are well schooled, well travelled and experienced.

BB: When asked who would be the next in line to wave the Northampton’s flag, Kieron Conway picked you. Who do you tip to follow after?

EJ: I would keep an eye on Carl Fail who is in team GB.

BB: How did you score Conway vs Cheeseman?

EJ: Cheeseman started well but half way through the fight I thought Kieron was winning comfortably. I think a draw was not an unfair result but Kieron definitely stole the show with his performance.

BB: How is your life outside boxing? What are your interests and passions?

EJ: I watch football with my mates on Sunday, but other than that I’m all business. I am still working full time so any spare minute I have is for training. May be that will change now.

BB: Can you tell us something about yourself that no one knows?

EJ: Outside of the ring, I am actually quite shy.

BB: Is there anything else you want to add or share?

EJ: I would to thank for their support my sponsor A.M. Waters, my Amateur coaches James Conway and Arthur Daly, and obviously Alan Smith and Frank Warren.

ZELFA BARRETT - "I WAS BUILT BEHIND CLOSED DOORS!" READY FOR ERIC DONOVAN TEST

AKEEM ENNIS BROWN "YOU'RE GOING TO HAVE A NEW BRITISH AND COMMONWEALTH CHAMPION COME SEPTEMBER!"

JOE GALLAGHER: “WHEN TASHA LOST NOBODY CAME TO CHECK ON HER, ITS FUEL FOR THE FIRE!”

FINEST GYM COACH STEVE MAYLETT BACK TO IT! SAYS TERRY FLANAGAN IS FITTER THAN HE HAS EVER BEEN!

THE ONE, THE ONLY, HARRY GREB

INSIDE THE TRAINING CAMP OF ALL TIME GREAT JOE LOUIS

FLASHBACK: MICHAEL JENNINGS KO OF JIMMY VINCENT IN ROUND 1 TO BECOME BRITISH CHAMPION!

THE "BLACK FLASH" PAT BARRETT - FROM FIGHTER TO TRAINER AND PROMOTER

EDDIE HEARN HAS FANS CREASED OVER LAUGHING AFTER THIS AWKWARD MOMENT

MIKEY RAMABELETSA, THE CHAMPION NOBODY WANTS TO FIGHT?

18 DAYS TO FIND A REPLACEMENT! TROY WILLIAMSON “NOBODY WANTS TO FIGHT ME!”

MICKEY ELLISON: "I WANT TO TEST MYSELF, SEE HOW GOOD I AM AND HOW FAR I CAN TAKE IT!"

MIKE MCGOLDRICK TRAINED OUT IN LAKE DISTRICT DURING LOCKDOWN BUT HAPPY NOW TO BE BACK IN THE GYM!

LIAM CONROY BACK IN THE GYM READY TO FIGHT! HOPING GOLDEN CONTRACT TOURNAMENT CAN BE RESCHEDULE

SAM NOAKS: LOOKING TO MAKE IT 4 CONSECITIVE KO'S AT THE BT TOWER LONDON

LUKE EVANS: JOINS MATTHEW HATTON FOR FRESH START "I NEARLY WALKED AWAY FROM THE SPORT!"