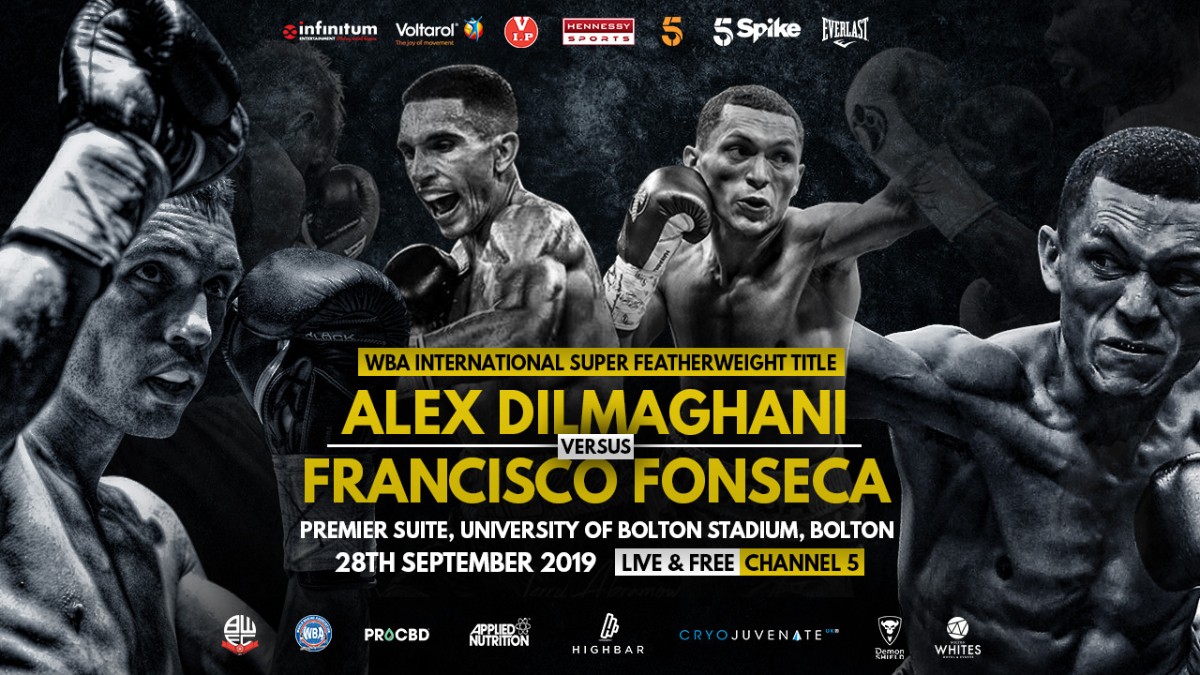 “Due to Nicaraguan Fonseca feeling unwell in his dressing room before his ring walk and then following an examination by doctors, the decision was made by the British Boxing Board of Control to withdraw Fonseca from the contest and he has been referred to hospital for further assessment.”

Last night at the University of Bolton Stadium Alex Dimaghani experienced every fighters worst nightmare. His highly experienced opponent Francisco Fonseca from Nicaragua was forced to pull out of their WBA International Super Feather Title fight with only moments to go. As Dilmaghani warmed up before the encounter a growing sense of concern was emerging between team Fonseca and the BBBofC representatives in attendance.

Fonseca reportedly having felt sick all day, now being sick and feeling dizzy was being closely monitored by medical professionals who ultimately decided with consultation from the Board, that the scheduled bout would not take place and the fight was called off just minutes before it was due to go live on channel 5.

Dilmaghani visibly dumbfounded and frustrated spoke to British Boxers in the aftermath:

“I’m absolutely speechless, how does this happen”

“I had it planned, I’d visualised handing the belt to my mother, taking to belt to my father’s grave, I’m devastated”

Dilmaghani was visibly emotional, a mixture of anger, shock and sadness. He learned his trade the hard way, hustling in the gyms of Mexico, bought in as a sparring partner for the National hero Juan Manuel Marquez, renowned for his brutal gym manner and for putting it on his training partners. He proved legendary trainer Nacho Beristain right. He needed a quality and durable southpaw to get his man ready for his fourth bout with the Filipino super star Manny Pacquiao and Dilmaghani did not disappoint, showing true heart in the sessions and developing with each one.

Dilmaghani has missed out on his potential coming out party. Although Fonseca is tried and tested, only losing to two world class opponents, team Dilmaghani were bursting with confidence ahead of this one, raring to go, eager to show British fight fans what they are capable of.

Although the team remained professional despite the late pull out, the frustration was evident with suggestions that Fonseca had not acted professionally in his food choices leading up to a big fight and after the weigh in, possibly causing the sickness. At the end of the day the fighters health is paramount and there was no way Fonseca was going to be allowed to fight given his physical symptoms, the true cause of which will probably never be known.

Dilmaghani now has to regroup, the classy southpaw has truly learnt his craft over the years and feels he was destined for a big win which would have put him inside the top 5 rankings for with the WBA. Watch out for him, he had fought and come through worse than this but it’s a bitter pill to swallow nonetheless.

Bolton, UK (28 September 2019) The Vacant WBA International Super Featherweight Championship to be contested this evening between Alex Dilmaghani and Francisco Fonseca at the University of Bolton, Premier Suite, has been cancelled.

Due to Nicaraguan Fonseca feeling unwell in his dressing room before his ring walk and then following an examination by doctors, the decision was made by the British Boxing Board of Control to withdraw Fonseca from the contest and he has been referred to hospital for further assessment.

Whilst Hennessy Sports are disappointed that the main event has had to be cancelled, we understand that Fonseca’s health and safety is paramount and respect the decision.