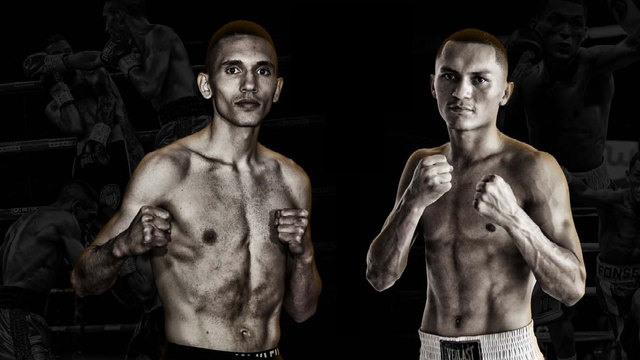 Super-Featherweight Alex Dilmaghani’s (19-1-1, 8 KOs) bid for the IBO belt did not work out as expected but his performance against two times world title challenger Francisco Fonseca (25-2-2, 19KOs) was still a winning one in terms of raising his stock and establishing his credentials at world level. After the bitter disappointment of their first missed encounter, both men rose to the occasion and gave an outstanding display of will in a relentlessly competitive and entertaining bout.

After one round of study, Fonseca opted to go all out on the offensive and try opening up Dilmaghani’s guard applying sheer aggression and force. He set an infernal pace fighting every second of every round and forsaking accuracy for volume in an effort to keep his opponent busy on the defensive.

He did not have to look for him though as Alex willingly engaged in the exchanges and often timed the exact moment where he would stop for a split second at the end of a combo to land single clean shots. Francisco’s left side was particularly vulnerable to counters. The Nicaraguan warrior did not have a plan B but did not need it either. His exceptional engine enabled him to sustain that intensity till the final bell. Still, it was anybody’s fight until the ninth, when an accidental clash of heads opened a gush above Dilmaghani’s left eye forcing him to hold for the first time and to go on the defensive for the rest of the fight. Fonseca stepped up the rhythm trying to capitalize on the injury but Alex survived some rocky moments while still throwing his own leather to make it to the finish line.

The result was a majority draw with two 114-114 cards and one judge scoring 115-114 for Francisco. Dilmaghani fell a tad short but proved he can definitely mix it at world level and gained some valuable experience. The journey continues.

While the IBO Super Featherweight title remained vacant, the WBA International one left the venue with John Joe Nevin (14-0, 4 KOs) who was facing Francisco’s brother Freddy Fonseca (27-5-1, 18 KOs). John’s superior hand speed and accuracy showed immediately as he knocked Fonseca down in the second with a straight cross.

Freddy took it well, though, and kept pressing and chasing the Irish man all throughout the fight. While the result was never in doubt, Nevin’s performance became a bit complacent down the stretch as he offered a very economical output. Fonseca’s aggression was not effective and John comfortably nicked the rounds with his more accurate and powerful shots cruising his way to a unanimous decision by scores of 99-90 and 97-92 twice. Had he kept busier the judges might have not been needed but what this performance surely confirms is that he is ready for stiffer opposition.

Just before the show went live on Channel 5, Featherweight prospect Alireza Ghadiri (2-0) scored a 40-36 decision over Bayardo Ramos (8-17-1, 4 KOs) from Nicaragua. Ghadiri was an elusive target thanks to his fluid upper body movement and footwork and feinted to make Ramos walk into crunching right hands for the first two rounds. Ramos’ output was close to zero but he was very cagey defensively and survived a rally in the third and some clubbing shots in the fourth to make it to the final bell. It’s still early days but we liked what we saw from Ghadiri so far.

Middleweight Mick Hennessy Jr (3-0-1), son of the event promoter, also featured on the card in a six rounder against Richard Baba (4-7, 2 KOs). He worked comfortably behind his jab following up with hooks to body and head and occasionally switching stances. The quality and quantity of what was coming back never required him to get out of second gear as he cruised effortlessly to a 60-55 decision.

Overall, a solid card whose main event more than lived up to the expectations and left us wanting to see more of Alex Dilmaghani.