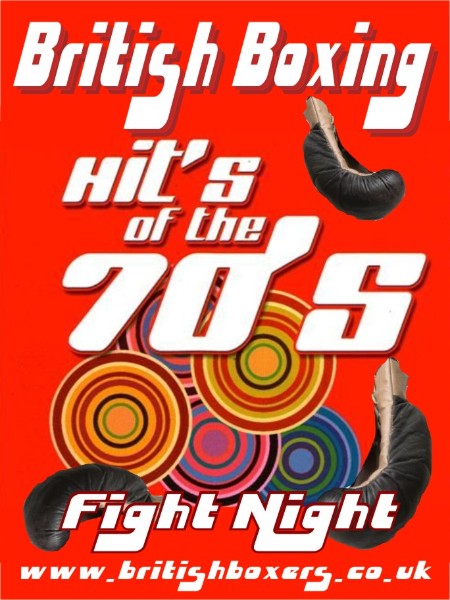 British Boxing Hit’s of the 70’s

The 1970’s – what a decade: the make-up, the glitter, the high heels and sequins, and as for the women! But the 70’s was a particularly rich era for British boxing fans who could forget about the occasional ballroom blitz and, instead, indulge in some tremendous rivalries. None of the divisions was more competitive than the middleweights

Throughout the seventies talented British fighters dominated in Europe and some of them even poked their head above the parapet onto the world stage, although, admittedly, it was 1980 by the time that happened.

The fighting Finnegan family provided us with light heavy, Kevin and middleweight Chris. Chris was a talented box-fighter with a tendency to cut, who on his best days, could give anybody in the world fits with his defensive skills and old school know how. Although he lost twice on cuts to future world champion and legend, Marvin Hagler, the chrome domed sensation from Massachusetts was later to cite Finnegan as his toughest opponent: and this from a man who shared a ring with Roberto Durán. Chris Finnegan was good enough to beat the likes of; Gratien Tonna and Jean Claude Bouttier, both of whom were talented enough to challenge the legendary Argentinian Carlos Monzón: a man many good judges consider to be a better champion than Sugar Ray Robinson.

Finnegan lost on points to Alan Minter three times with the British Title at stake and each one of those fights was a fifteen rounder. Despite these being closely fought contests, Finnegan was never able to fathom out Minter’s style. Nevertheless, at the end of his career he had been British champion three times and European titlist on two occasions. Outside the ring, Finnegan went on to become a respected painter, whose work was well regarded by many critics.

Our pool of talent was so deep in the seventies that it threw up some fighters, who were classed as journeymen, but who, in another era might well have been champions. One of these was Frankie Lucas who despite only amassing a total of 17 fights in his career, was good enough to knock out former European champion, Angelo Jacopucci in the twilight of his career. It was an open secret in boxing at the time that nobody wanted a piece of Frankie Lucas.

Another dangerous puncher who got his career underway in the 70’s was Leicester’s Tony Sibson. Sibson launched his career with a second round knockout and was undefeated until he was matched against Zambia’s dangerous Lottie Mwale, who was a natural light heavyweight. In this fight Sibson was knocked out in the first round, in what was more of a failure in the matchmaking than anything else. Sibson fought both the standout British middleweights of this era, losing a fifteen round decision to the aforementioned and ever canny Kevin Finnegan and effectively ending Alan Minter’s career with a third round KO in which Minter suffered severe damage to his nose; so much so that he required surgery after the fight.

Sibson’s loss to Finnegan was over fifteen rounds. Can you imagine such a thing these days! A fifteen round clash for the domestic title. These were the days when terrestrial television, usually in the shape of the BBC broadcast many of these big bouts featuring an all British cast.

Kevin Finnegan’s arch rival on the domestic front was eventual world champion, Alan Minter from Crawley. Although Minter actually won the world crown in 1980, for many, his will be a name associated with the 70’s. He won the ABA middleweight title in 1971, before going on to win Olympic Bronze in the Munich Olympics the next year. Minter might have done a lot more on the world scene were it not for two things: a terrible tendency to cut, if an opponent so much as looked at his eyebrows, and the ominously rising form of Marvin Hagler. In what is quite an unusual career progression these days – outside the heavyweights – Minter only ever boxed at 160 lbs. In a bid to stop his ever leaking brows, the Crawley southpaw resorted to surgery in which the prominent bones of his forehead were planed down to a smooth finish.

Minter finally won his world title against Italian, Vito Antuofermo (who had a cameo role in the film Godfather 3) in Las Vegas. Antuofermo was another battler with a scarred browline, although he reckoned his wounds were the result of stone throwing fights: a reminder of his rough and tumble childhood in Bari, South East Italy. Minter fought a tactically perfect fight that night, keeping his distance and not allowing Antuofermo to bore his way in with his ever careless head. In a rematch Minter won on cuts in the eighth round, but when it came time to defend against Hagler, he was no match and was stopped in three rounds amid some disgraceful scenes that did the image of British boxing no good at all.