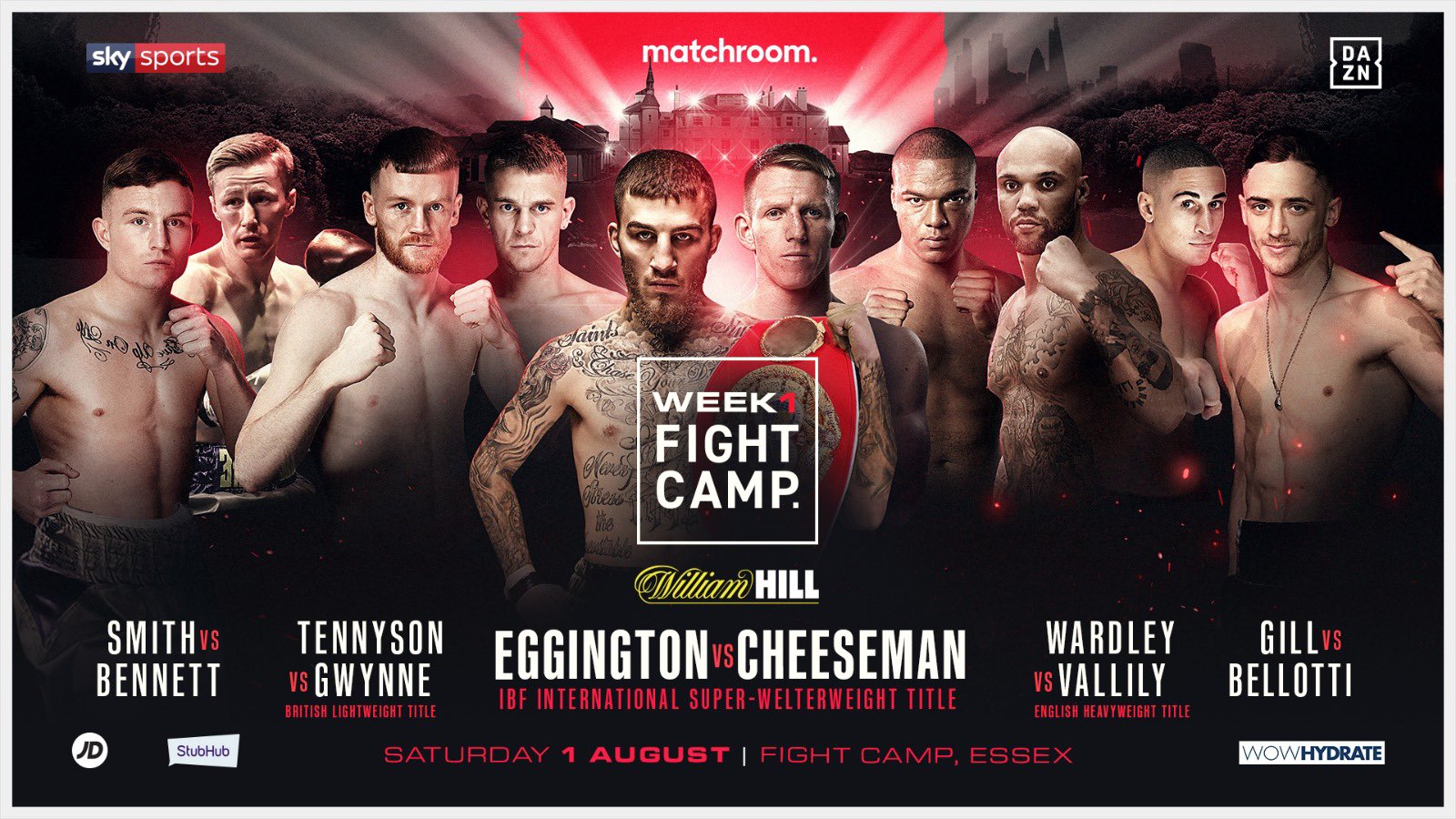 “This is event is history, it’s something people are going to be talking about for years, so everyone is going to be tuning in.”

Sam Eggington and Ted Cheeseman will take the stage in the main event on the first week of Fight Camp at Matchroom HQ on Saturday, with the IBF international super-welterweight title on the line.

The stakes are exceptionally for both, with Birmingham fighter Eggington coming into the bout on a streak of four successive victories since his last defeat to Liam Smith back in 2019, earning himself top-five ranking with the IBF.

Meanwhile 24-year-old challenger Cheeseman will be looking to bounce back from a three-fight winless streak, losing in controversial fashion to Scott Fitzgerald and more emphatically to Sergio Garcia, with a draw to Keiron Conway sandwiched between.

IBF super-welterweight champion Eggington has benefitted from sparring at Joe Gallagher’s Gym in Manchester and will be looking to help continue his positive momentum, with a unique opportunity presenting itself in the shape of a bout with Cheeseman as a result of the pandemic. ‘The Savage’ will hope that a victory will allow him to set up a huge title eliminator, in order to move to the top of the pecking order to face Jeison Rosario.

He exclusively told BBTV of his excitement at fighting on the global stage on the return of Matchroom boxing in the UK, and revealed his desire to put on a show on Saturday night.

“There will be a lot of people watching and it will be aired all over the world, it’ll be good to get the job done with new fans watching. I’m just buzzing, I wanted to be on one of the garden shows and to be headlining the first one is a real bonus.

“We both need the win; I suppose you could say we are both at the same stage.”

On the other side of the tape, Cheeseman stands ready for redemption after falling extremely unluckily in his last bout, and is sure to play a huge part in the contest with pace and aggression from the offset, desperate to return to the top with a new lease of the life in the sport.

The ‘Big Cheese’ told BBTV: “I don’t think this fight would have happened if it wasn’t for the lockdown and it’s gonna be a great fight, we are going to see the old, but improved Ted Cheeseman and I’m ready to steal the show then push onto big things.

“This is event is history, it’s something people are going to be talking about for years, so everyone is going to be tuning in.”

With both British fighters possessing a relentless attacking style in the ring, a hugely anticipated fight is expected at Matchroom HQ with fireworks and excitement sure to grip the top of the bill on the first week of Eddie Hearn’s Matchroom UK relaunch.