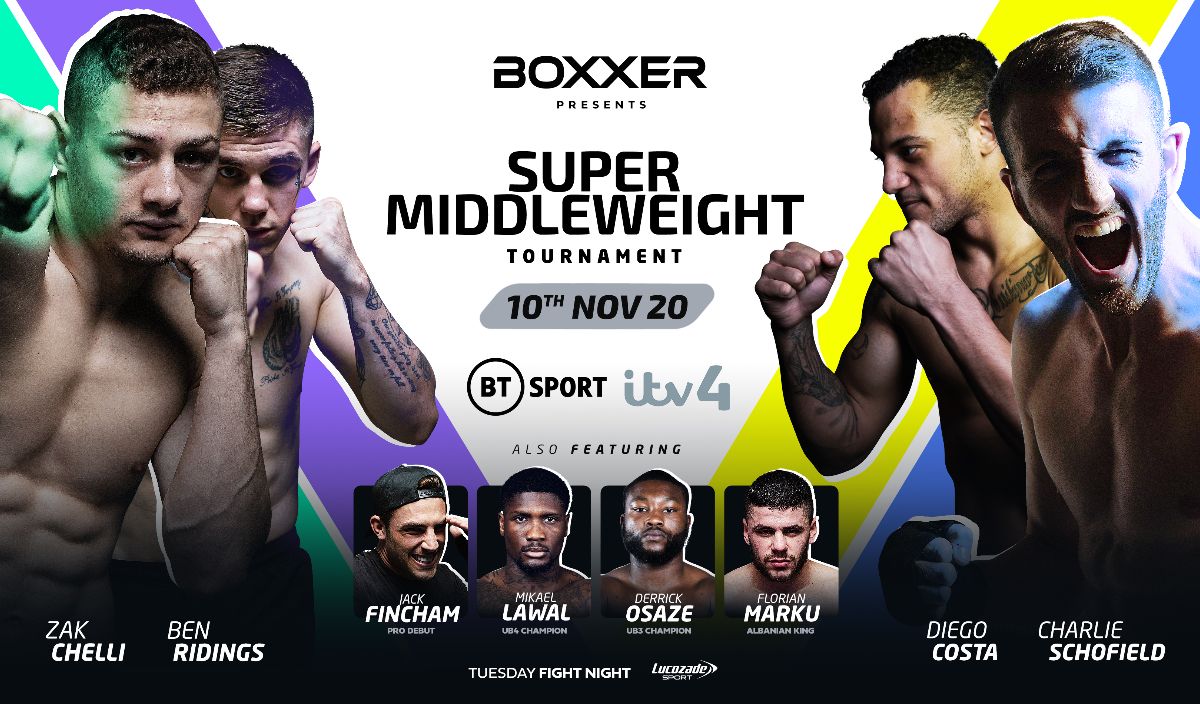 UB7, in association with Betfred and Lucozade, will be on Tuesday 10th November LIVE from the BT Sport studio in Stratford for a special Tuesday Fight Night with the debut tournament in the super-middleweight division.

In an exciting development, UB7 will be presented around a four-man competition format. This will comprise of two semi-finals and a final, all in one night – for the first time ever. The winner claiming the Golden Robe and the lions share of the prize money.

In a real groundbreaking move for BOXXER, in addition to UB7 being broadcast LIVE with our partner BT Sport, the show will also be simulcast live on ITV4 which is available on free-to-air across the UK.

Some significant changes for the new Millennial boxing brand and we’re delighted to implement them ahead of our return in the four-man 168-pound square-off with the following line-up:

Zak Chelli (7-1-1, 3 KO’s) Joint youngest in the tournament at 22 but has crammed in plenty of ring experience in just three and half years of pro action with nine fights and 52 rounds plus a Southern Area title.  He’s pulled off a few shocks previously by beating unbeaten prospect Umar Sadiq and dropping contender Kody Davies.  He’s the bookies favorite off the back of his highly questionable draw with Jack Cullen at Matchroom’s Fight camp last time out as the away fighter.  He’s hungry for the win and then onto a rematch with Cullen.

Diego Costa (7-0-0, 5 KO’s) Regarded as the most avoided man in the division but there is no home corner in this competition. The Boy From Brazil brings sizzle and salsa when he fights! From Recife, Brazil, and fighting out of Fallowfield, Manchester, Costa is the puncher in the pack with five KO’s in seven fights to earn his nickname ‘Dynamite’.  Costa will have the benefit of being trained by former Prize Fighter winner Martin Murray who is familiar with the tournament format.  He’s the oldest at 34, but the most dangerous and with explosive packed fists can end a fight at any second.

Charlie Schofield (15-1-0, 1 KO) At 6ft 3in, Schofield is the tallest boxer in the line-up and has been dubbed the ‘Manchester Giant’.  The 27-year-old has accumulated the most ring experience with 87 rounds in 16 fights, including an English title challenge in his last fight. He’ll be looking to impose his size and ring savvy to victory.

Ben Ridings (3-0-0) The up-and-coming 22-year old from Bury turned pro in 2018 and is undefeated in his three fights with twelve rounds.  Being an unknown quantity means he’s got nothing to lose and is confident of pulling off the biggest shock on the night.  Ridings is the youngest competitor and is an outsider, but will rely on his youth and desire to overcome his rivals’ age and experience.

To support the super-middleweight shoot-out in UB7, an action-packed undercard has been formed and one of the highlights is the exciting and intriguing professional debut of reality star and UB presenter Jack Fincham who leaves the showbiz world behind to enter the gritty world of professional boxing. To start his journey he has teamed up with world champion trainer Ben Davison.

Far away from his victory on the 2018 series of ITV hit show Love Island, Fincham now steps between the ropes – he was a former amateur with 26 fights – to compete as a pro-boxer in the light-heavyweight division and aims to prove he’s for real.

Also featuring on the card are two previous UB winners who have now signed long term promotional contracts with BOXXER as they continue their careers towards championship honours with BOXXER firmly in their corner.

UB3 Middleweight winner Derrick Osaze (10-0-0, 2 KOs) is the first boxer to sign a multi-fight deal with BOXXER and is on the cusp of challenging for titles.  Known as ‘The Punching Preacher’ because of his dual role as an ordained minister for his local church and his work with troubled youths, Osaze believes he can become a real force in the competitive 160 pound division.

UB4 Cruiserweight winner Mikael Lawal (12-0-0, 7 KOs) is also within touching distance of challenging for the British title and the hard-hitting 25-year-old talent from Shepherd’s Bush has put his rivals firmly on notice.  With BOXXER’s backing he believes he can finally realise his dream of becoming a champion.  It’s a long way from his days as a homeless 13-year-old living on the streets of Lagos, Nigeria, and begging for scraps of food to survive.  Lawal has been nominated for an Eliminator contest for the British Title against Luke Watkins next so he’ll be going all out for victory on UB7.

The power-punching, London-based, Albanian sensation Florian ‘TNT’ Marku (6-0-0, 4 KO’s) will again appear on the undercard.  Marku featured on UB6 and impressed with his commanding victory over Nathan Bendon to take his unbeaten record to six fights and has already been linked to future fights with rivals Josh Kelly and Connor Benn.

BOXXER founder Ben Shalom, the youngest licensed promoter by the BBBofC, is excited with the new developments for UB7 and the future.

He said, “Whilst it’s been a challenging period for everyone, I’m delighted that we have used the time to identify opportunities and to make and implement significant changes for UB7 and beyond.”

“We’re back, it’s on a Tuesday night and I’m thrilled with the new four-man tournament format which, following regular consolation with the BBBofC, has been approved and allows us the flexibility to use in conjunction with our eight-man format,”

“Alongside our broadcaster partner BT Sports we’re delighted that the show will be simulcast live on free-to-air ITV4 which will allow even more viewers across the UK,”

“We want people to watch our shows without knowing who is going to win, true 50-50 fights and are really proud of the card we have put together. We’re confident it will keep viewers gripped all around a really competitive four man, one night tournament.”

“We’re excited to begin the promotional journey with champions of our previous shows, this is a new chapter for the company and think the huge audience this show brings on simulcast, is a great start. The Jack Fincham signing raised a few eyebrows, however, I can assure you he’s serious, Ben Davison has agreed to train him, which is a huge opportunity for him.

“The year so far has presented challenges, but we’re really pleased that we can deliver UB7 for the fans on November 10 and we intend on going forward into 2021 with further exciting developments.”